A number of factors are driving disruption in the insurance industry, posing a major challenge for the regulators – a challenge the UK regulators are rising to with gusto, says Helen Chapman, an insurance partner at law firm Hogan Lovells 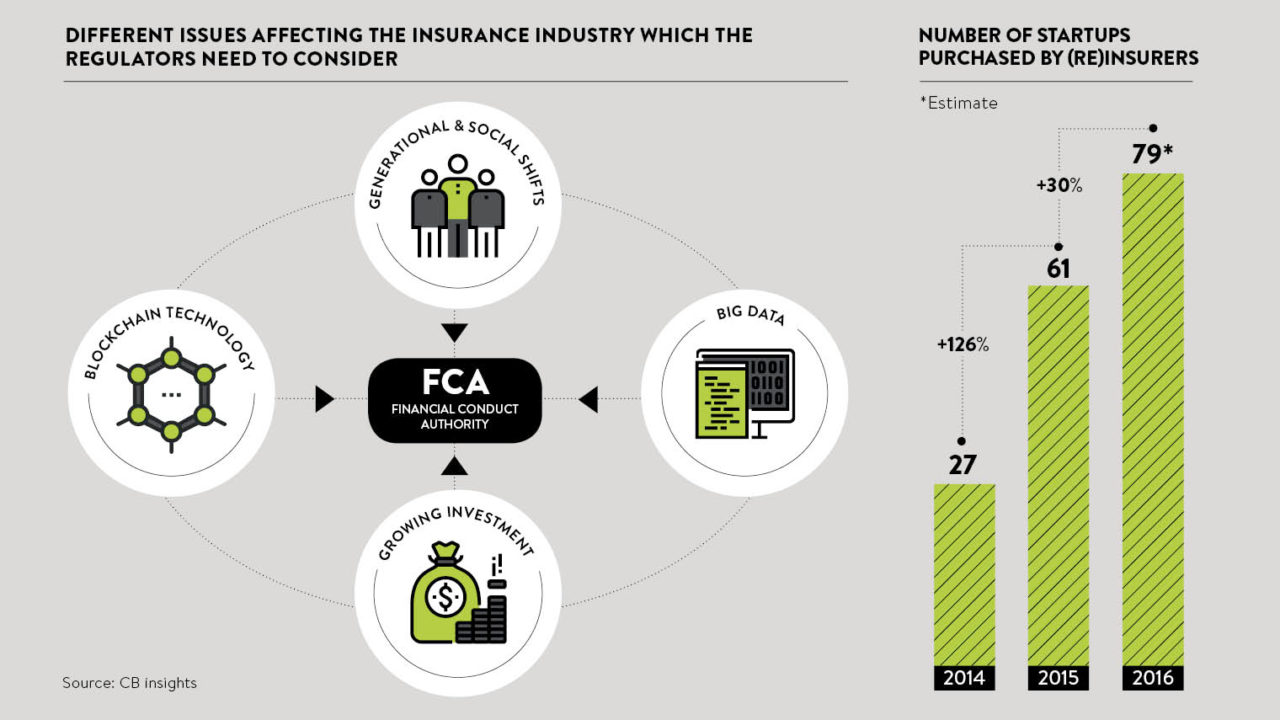 So what are the factors driving the disruption?

In the retail insurance space, consumers are more connected than ever, via a multitude of devices and through multiple platforms. This has two consequences: first, consumers increasingly expect a much better, smarter service. “People are frustrated with a clunky process for buying insurance, and want an easier and quicker process through simple digital channels,” says John Salmon, a technology partner at Hogan Lovells.

Second, a larger proportion of consumers fall into Generation Y or the millennial generation: these individuals are less likely to own property or cars, are less attracted by life assurance and are looking for more tailored cover they can buy easily and quickly. They are attracted by the sharing economy. Helen Chapman, who runs the insurance policy wording unit at Hogan Lovells, is seeing an increase in demand for insurance products to be designed on a modular basis, allowing customers to purchase just the cover they need at a price which is calculated on the basis of actual customer data. Customers are no longer interested in annual policies which might cover them for risks they do not run.

As the FCA (Financial Conduct Authority), the UK’s conduct regulator, has said, big data “can be used by firms to transform how consumers deal with insurance firms, allowing firms to develop new products as well as reducing form-filling, streamlining sales and claims processes”. It also allows insurers to price risk more accurately. This is a major opportunity for insurers, which they are seeking to capitalise on through the use of technology: telematics in motor insurance; wearable tech in life and illness insurance; intelligent home technologies for property insurance.

The new technology available to insurers and intermediaries is revolutionising the way they run their businesses. Artificial intelligence technology, such as robo-advisers and chatbots, can increase efficiency and improve customer experience. Drones have the potential to cut costs involved in inspections for claims purposes. As insurers amass more and more data, in particular from connected devices, data analytics tools allow insurers to use their data in a smart way and gain valuable insights into customer behaviour and trends. Often, cloud computing underpins the use of these other technologies. And not forgetting blockchain technology, which has the potential to transform the insurance industry, but which insurers and reinsurers are just beginning to consider seriously.

A feature of the insurtech phenomenon is the mountain of capital available from interested venture capital and private equity firms as well as established insurance market players. This is fuelling a boom in innovative startups.

Who are the disruptors?

Not who you might think. While there are many startups vying for a piece of the pie, much of the innovation is being driven by incumbents: large, often global players in the insurance markets. All the major insurer groups have their own accelerators or incubators, mentoring and investing in innovative ideas either for products or means of distribution. Many reinsurers are investing heavily in these sorts of ventures because they see the mining of the data that they have access to over broad market segments as key to their future success. One of the challenges, however, is the cultural shift that is needed for a traditionally risk-averse organisation to truly embrace innovation and creativity.

Alongside the might of the incumbent insurance and reinsurance groups are the innovative startups, often funded by venture capitalists. What they might be lacking in experience, they make up for in agility.

The ability for technology to shake up the insurance distribution chain has attracted non-insurance brands into parts of the market too. Insurers and intermediaries are facing off to major players from other areas, including technology providers, and manufacturers of cars and consumer electronics. While some incumbents view this advancement as a threat, others have been welcoming the opportunities this could bring and otherwise unlikely partnerships have been forming.

The scale and pace of change in the industry presents a significant challenge for the regulators. The FCA has commented that it sees change as the new normal and is embracing it. The FCA has actively sought ways of ensuring it meets its objectives, which include ensuring the relevant markets function well and protecting consumers.

In order to do this and ensure that regulation remains relevant to the new normal, it initiated Project Innovate in 2014, including an Innovation Hub, which Mr Salmon describes as “extensive ‘sandbox’ testing, enabling innovative insurance businesses to take part in assessments of how they meet regulation, without fear of penalty”. It promises to provide fast, frank feedback on the regulatory implications of financial firms’ technological development. Working closely with firms in this way gives the regulator the information it needs to tailor its regulations to the new business models.

Alongside the Innovation Hub, the FCA is actively considering issues such as big data to understand the use of data by firms better, and how this affects consumer outcomes and competition.

Even more noteworthy is the FCA’s international engagement. It has co-operation agreements with a number of overseas regulators (Australia, Singapore and Korea), with the aim of promoting the UK as a centre for innovation in financial services.

These activities are in stark contrast to other regulators around the world. Lawyers in Hogan Lovells’ international insurance practice have remarked on the progressive steps being taken by the FCA compared with those in their jurisdictions. There are few local regulators that are taking as pro-active an approach as the UK regulators. However, as already mentioned, some other jurisdictions are co-operating with the FCA and positive steps are also being taken in Hong Kong. In the United States, a House Bill was introduced in September with the expressly stated aim of keeping the US from losing financial innovators to the UK’s regulatory sandbox.

It is clear that we are witnessing a watershed in both the insurance industry and the relevant regulation.