Travelling for businessmen and women used to mean business class on a major national carrier, but now there are other options

You’re planning a business trip abroad. Five years ago, unless you were very junior or very senior, you would almost certainly assume that you’d fly business class on one of the main airlines. Not anymore.

Business travellers now have new options at both ends of the price scale. At the upper end, the luxurious and exclusive world of private aviation is undergoing major changes. New disrupters are coming into the market offering cheaper seats and innovative business models that make private jet travel more accessible. At the more price-sensitive end of the market, low-cost carriers, such as easyJet and Ryanair, are aggressively targeting business customers.

“Business travel is no longer the domain of an exclusive elite,” says Chris Lynch, head of global aviation at PA Consulting Group. Business passengers pay more and therefore provide better yields for airlines, he explains. “That’s why airlines, including low-cost carriers, are fighting over them.” When low-cost carriers first launched, they were very much aimed at volume, but now they are looking to increase margins, he says.

The percentage of business travellers at Flybe has risen from 40 per cent to 50 per cent in the last year, while the number of low-cost tickets booked by business-travel specialist Carlson Wagonlit Travel rose by 17 per cent between 2013 and 2014.

Even before it began targeting business passengers in a typically aggressive fashion last August, some 27 per cent of Ryanair’s passengers were travelling on business, according to the company. Its Business Plus tickets offer unlimited flight changes free on the day of departure plus priority boarding and extra leg room. In January it announced the extension of its Business Plus fast-track security service to London Gatwick, Rome Ciampino and Eindhoven, from April 1.

“Uptake has been very strong,” says Ryanair spokesman Robin Kiely. He compares the success of Ryanair for business passengers with that of Aldi and Lidl among middle-class shoppers. “Our London to Dublin route is the second busiest business route in the world. And we now have flights to more major business airports, such as Rome Fiumicino, Paris Charles de Gaulle and Brussels Zaventem. Today business people, especially those running small and medium-sized enterprises [SMEs], don’t want to waste money on warm champagne and all the frills that you get in traditional business class.” 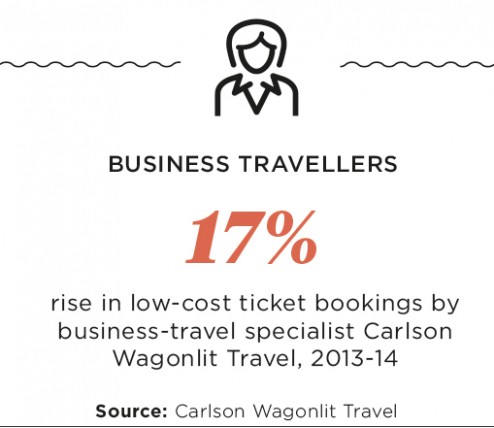 Passengers travelling for business now account for more than a fifth of easyJet’s passengers with over 12 million choosing the airline every year – and that number continues to grow. Anthony Drury, the company’s head of business says: “We have built a network which lends itself perfectly to business passengers, focused on main primary airports with multi-frequency flights and a flexible fare. In many ways traditional business-class airlines are rapidly playing catch-up and trying to emulate the low-cost operating model by taking out frills, including free hold luggage, inflight catering and free seating.”

Both easyJet and Ryanair argue that innovations, such as allocated seating, have made them more appealing to business passengers.

At the upper end of the private jet or business jet market, operators are also keen to take a chunk out of scheduled airlines’ business. Paul Dear, director of supplier and industry affairs at corporate travel group Hogg Robinson, says: “From a group air perspective, where you’ve got a number of travellers from the same organisation going to a single destination, we are seeing private jets increasingly being considered.”

Eymeric Segard, chief executive of private jet hire LunaJets, adds: “With private aviation, executives can travel to two or three European capitals in the same day, or fly to smaller airports that are in fact much closer to the final destination or to home. If you count all this time saving and its value for the company, then business aviation is an investment, not an expense.”

British Airways and others are keen to defend their offering. “Customers travelling in Club World or Club Europe can take advantage of our extensive network of lounges around the world,” says a BA spokesman. “Last year, we celebrated the fifth anniversary of our unique Club World London City service.” Offering just 32 full-flat bed seats between London City and New York JFK, the sole business class-only service between the world’s two financial centres, it offers much of the comfort and exclusivity of a private jet. Recently, BA re-launched its SME programme On Business, allowing small and medium-sized businesses to earn and spend points.

However, Caroline Strachan of American Express Global Business Travel maintains most travellers prefer to use scheduled airlines via Heathrow. “We find most senior businesspeople are based in London and the Home Counties, and so it’s most convenient for them,” she says. There has been a move from business to economy, especially for short haul, says Ms Strachan. However, she sounds a note of caution to companies looking to reduce their travel costs further in sectors where the talent is tight. “Offering business-class travel to potential employees can be an important differentiator,” she says.

The increase in business passengers travelling economy or no frills has seen additional services spring up to make the experience a little bit more luxurious. No.1 is a service that provides a range of lounges and premium products to improve the pre-flight experience, regardless of airline or seat class. It’s increasing its footprint at Gatwick by 70 per cent this year.

“Slightly better food and a curtain are essentially the only benefits a business traveller gets out of a short-haul flight,” says No.1’s founder Phil Cameron. “The real value is on the ground: being able to optimise time before the flight, by speeding through security and having the right services available on demand during the waiting time that follows. If the objective of business-class travel is to arrive fresh, bolting on lounge access to a premium economy flight is easily justifiable for the business traveller.”