Healthy disagreement and challenge at work is not always a bad thing but, past a certain point, conflict can become damaging.

As Bev White, managing director of Penna Career Services, explains: “It’s important to deal with conflict because trust breaks down and people stop collaborating. Stress builds up and people lose respect for their leaders; they may even leave the business.”

However, with so many policies and procedures in businesses designed to deal with conflict – not to mention complex and long drawn-out grievance procedures – it’s not surprising that managers often shy away from dealing with it before it’s too late.

David Liddle, chief executive of the TCM Group, a mediation specialist, says that instead employers ought to see conflict as part of business as usual, and equip managers to “act as diplomats, rather than sticking their head in the sand and hoping that HR will come and sort it out for them”. 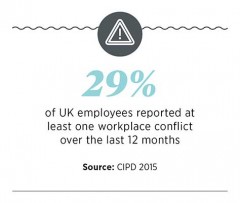 “Conflict can be an opportunity and leaders need to create conditions where people can have a dialogue,” he says.

When relationships do break down, companies can either support managers to run a mediation process with those involved or call in the services of external mediators who are experienced in dealing with conflict objectively and sensitively.

Mike Williams, human resources director of restaurant chain Byron Hamburgers, has run mediation meetings internally before, asking the individuals involved to write down four things they need from the person they’re in conflict with. Both sides make a commitment to doing something to improve the situation, put the commitment in writing and review it with their manager 12 weeks down the line. “The trick is to get them to hear what the other person is saying and for them to make that commitment to doing something,” he says.

Mr Williams chose to handle mediation internally, but there are advantages to bringing in mediators from outside the organisation, says Ms White. “Someone fresh to the situation can stand back and take the heat out of the problem,” she adds. “Mediators can help people articulate their ideas in a way that’s not aggressive and doesn’t prohibit them from listening to others’ ideas.”

External mediators can also be brought in to train staff in mediation skills, so resolution becomes more ingrained in their workplace culture. The TCM Group did this with Lancaster London hotel, where mediation is now one of the first steps offered when problems arise. It’s a far cry from the old system, where there were multiple disciplinary procedures, each taking up time and resources, and not always solving the problem.

HR officer Harriette Wolff, who has trained as an in-house mediator, says: “It has given people a platform to speak before something turns into a conflict.” Introducing mediation training has led to a dramatic drop in formal grievance procedures and staff are happier, according to Ms Wolff.

And while it can be daunting to deal with issues as they arise, not addressing conflict can be damaging for business. Leave it too long and productivity dips, customer service deteriorates, and others in the team may be drawn in – so better to deal with it up front.

We still need to save more for retirement

The changing qualities of a business leader

Why peacemaking at work is a valuable skill