At the turn of the 21st century, workplaces were being transformed by technology. On financial trading floors, for example, swarms of loud and animated traders in colourful jackets had been replaced by machines quietly processing trades. Intermittently, commentators speculated that education, too, would be revolutionised.

Yet it was not unusual in the 2000s for a teacher to use chalk and a blackboard to teach pupils sat at rows of wooden desks. Even as governments and schools invested heavily in equipment, such as interactive whiteboards, as late as 2008 or 2009 these could be underused and gathering chalk dust.

However, in recent years the education technology or edtech market has exploded. It is now growing at 17 per cent a year and will be worth $250 billion by 2020, according to EdtechX Global and IBIS Capital. Finally, technology seems to be on the brink of transforming education into something very different to the world of just ten years ago.

So what changed? Whereas previously technology usually focused on hardware and methods of doing things the same way – think interactive whiteboards that ended up being used as very expensive flip charts – increasingly software innovations have enabled teachers and students to do more, and to do it faster and cheaper. Also, improved smartphone technology has created a thriving apps market.

But while technology can do the work of several ordinary people, it cannot replace an extraordinary teacher and the best innovations seek to augment traditional excellence rather than replace it.

The United States, especially on the West Coast, has set the pace in edtech innovation. It boasts all four edtech companies with $1-billion valuations: Udacity, Age of Learning, iTutorGroup and Pluralsight. There are around ten edtech-focused accelerators and the first, Imagine K12, was recently absorbed into the world’s premier tech accelerator Y Combinator. American edtech firms raised $1.4 billion in funding last year, according to The Atlantic magazine, and in both New York and California there are organisations dedicated to acting as a middle man for schools and edtech companies.

Hot on the US’s heels is the UK, especially London, at the epicentre of a European market that accounts for 25 per cent of global edtech spending, says EdSurge. London hosts Europe’s biggest edtech conference, EdTechXEurope, and a dedicated co-working space and accelerator programme, Emerge Education.

A new generation of tech-savvy and better trained teachers, a government focused on devolving spending and procurement power to schools, technology improvements and a more pragmatic focus on what works have all combined to create a propitious environment.

Edtech UK, a strategic body working to accelerate the growth of the sector, now has a network of more than 1,000 companies. Chief executive Ian Fordham says: “The UK is now home to an incredibly diverse sector with firms not just in London, but all across the country rapidly innovating in digital, apps for schools, augmented reality, communications with parents and professional development – we are entering into an exciting and dynamic time.”

So far the biggest market and most notable innovations have come for school-aged children. Exam revision app Gojimo, whose 23-year-old founder dropped out of Stanford University in California to concentrate on scaling it, has 300,000 users answering curriculum-specific questions on smartphones and has raised more than $1 million in funding.

Cambridge-based Wonde help schools keep data secure by allowing them to see all third- party access attempts, and Show My Homework is enabling teachers to set, mark and return homework digitally. UK academies and free schools are learning from US charter school chains such as Rocketship Education and beginning to use games and online tools to make learning more personalised and teacher time more focused.

Emerge Education chief executive Jan Matern argues that the UK’s development of “a great network of experts, investors, publishers and partners around the space” means his accelerator and the wider UK edtech market is now able to “attract some of the best entrepreneurs around the world”.

The evidence for this can also be seen in significant developments in adult and workplace learning. Proversity offers employees structured and personalised training via a mobile app, and are planning an expansion to North America and Asia. Memrise have raised £4.5 million in venture capital funding for their language learning app and Fluency enables learners to become visible to employers as they complete relevant online courses, some designed by the employers.

Education technology’s time appears finally to have come. Last year saw venture capital deals worth more than £6 billion and the first billion-dollar purchase of online course operator Lynda by LinkedIn. Classrooms will look less and less like their Victorian predecessors as pupils learn through apps and games, and teachers teach with online tools and big data.

In a world where education is the smartest investment and the last expense spared by aspirational families, the sharpest minds and deepest pockets are likely to be increasingly drawn to edtech startups.

Schools, parents and investors need to learn fast or risk being left behind. 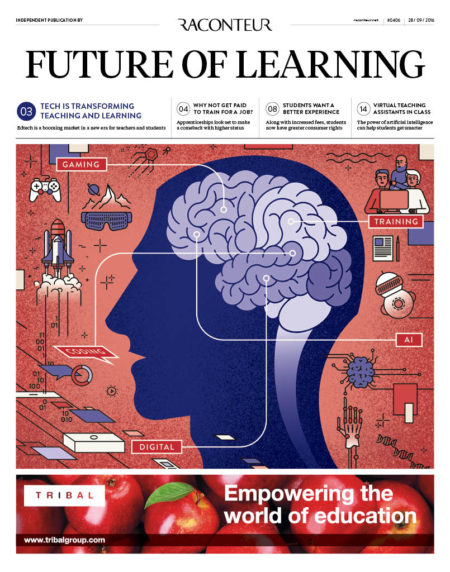 Tech is transforming teaching and learning

Apprenticeships prove a popular alternative to the cost of university

Professional development is key to advancing your career

Also in Future of Learning