Data is a business’s closest ally. It unlocks insights into the fabled customer journey that can have a real, bottom-line impact. But despite the rapid proliferation of this data-driven mindset making significant advances in areas such as marketing and human resources, the impact of data on sales remains relatively nascent. As companies increasingly turn to advanced technologies, such as data science and machine-learning, sales operations has the opportunity to enter a new golden era.

Sales operations is not a new domain, having emerged in the 1970s and grown steadily over the past 50 years. Chiefly concerned with guiding sales strategy and planning, it’s a profession based on increasing systems integration and reducing friction in the sales process.

This has become increasingly important as more and more technologies have penetrated companies’ revenue ecosystems. As Scott Brinker, renowned computer programmer and founder of chiefmartech.com, says: “The centre of gravity started to shift to those who could make that machinery work.”

This rings true for sales. As technology continues to define customer experience, sales operations “can and should play a vital role in enhancing and accelerating the buyer journey”, says Don Matejko, chief revenue officer at Showpad.

Data is, undeniably, everywhere. And while it’s been a few years now since big data stopped appearing in isolation on the Gartner Hype Cycle, a whole host of new, more specialised technologies have taken its place. Nevertheless, despite the maturity of big data, the truth is the ecosystem is still often fragmented, disparate or underutilised.

Allison Searle, vice president of sales, Europe, Middle East and Africa, at OmniSci, says: “As businesses look to find incremental gains in new areas, sales operations leaders can provide valuable customer, location and alternative data insights.” After all, who better to see where the missing data is in the revenue ecosystem than those who are building the tech stack from the ground up?

Once you get to a certain point, however, “getting the right data at the right place at the right time and turning that into information and insight becomes a huge challenge”, says Mr Matejko.

Companies often build data lakes – centralised repositories of data in its natural format – to overcome this and form the basis of machine-learning. But this has “in practice, been hindered by those data lakes pooling only tiny droplets from each employee’s puddle”, according to Mike Osborne, founder and scientific adviser at Mind Foundry.

Businesses have often “ignored the rest of the wealth of experience, not explicitly codified into data, of those at the coal face of business decision-making”, he says. This is where sales operations should step up to the plate to play a greater role in centralising field data from the front line of sales.

Beyond helping the data itself, sales operations has a role to play in enabling data scientists. The vast amounts of data that most organisations have amalgamated without much process or intent makes it a daunting task to tackle. “Data science teams have a challenge in terms of focus; the sum total of data within most organisations is massive and disparate,” says Mr Matejko.

It’s here that sales operations should be able to help, guiding the data scientists to the relevant and valuable revenue data that could hold the answers to business questions. Whether helping organisations bring together important sources of data or helping data scientists find it again, this collaboration, as Ms Searle puts it, “enables data scientists to deliver models built with more predictive features and uncover hidden pockets of value for the organisation”. 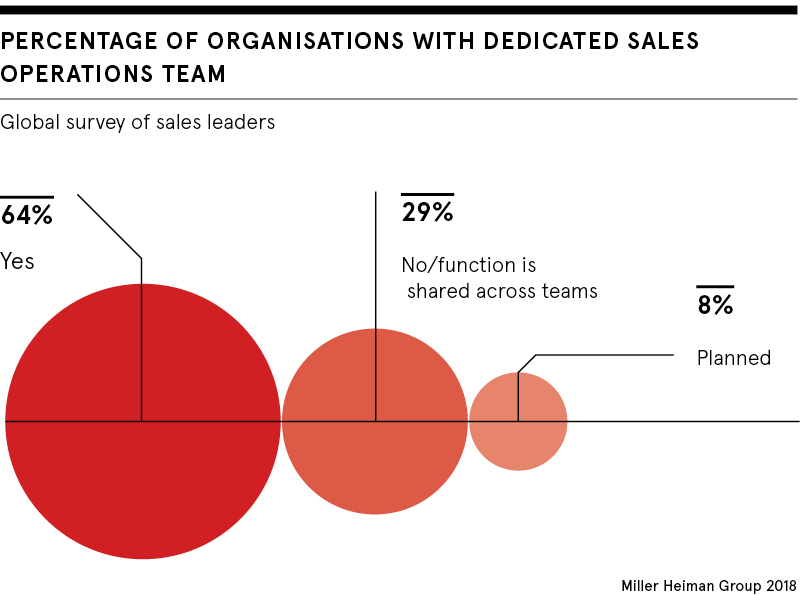 Getting back to the bottom line

What really matters is taking the output of data science and recursively empowering commercial teams with it. As Mr Osborne summarises: “Data plus machine-learning offers decision-making at scale.”

Once all the data is in the right place, machines can be put to work to mine information from it. “Machine-learning offers the key to unlock this knowledge and to turn it into decisions,” Mr Osborne adds.

The job doesn’t finish there, though. At least for sales operations, the job’s only just getting started. Machines can make decisions at scale, no doubt, but they mean nothing without the adoption and comprehension of the sales team.

Part of the sales operations role is to bring the human elements that sparked the original problem recognition back into the information provided from the machines. How do the decisions made or the relationships uncovered help a salesperson improve a customer relationship?

Steven McMullen, director of business intelligence at AdHawk, says: “I see my role as telling the story behind data so commercial people can understand the context and get to the conclusions they’re looking for.”

That’s the role of an analytics translator and, if you believe what McKinsey says, it’s fast becoming one of the most important disciplines in business. Only when you get back to this repeatable relationship between uncovering business problems, putting the data to work, applying machine-learning and then bringing it all back to that original, human issue, can you really say you’re doing data-driven sales.

What will the future of sales operations look like?

If you take salespeople, the sports cars of the business world, and drive them into a data lake, it all ends horribly. The role of sales operations has always been one of reducing process friction and accelerating sales velocity, but perhaps now it’s time to retrofit.

Adapt those sports cars and they will find new success in the data-enabled world. Given the current geopolitical climate, resilience and adaptability have never come at a greater premium.

To build on the thoughts of chiefmartech’s Mr Brinker, there is no doubt that centres of gravity are shifting. That quote, however, was from 2013 and now we see the centres of gravity shifting not only to those who make the machinery work, but to professionals able to combine the elegance of human expertise with the raw power of machine-learning.

This marks an exciting direction for the future, not just for the sales operations profession, but for the wider business. Sales operations is entering a golden age of machine translation and adaptability engineering, and becoming the bridge between the human brilliance of sales teams and the machine-enabled expertise of data teams.

“A lot of it is trying to think about moving from quantity to quality. You need to put the data in the context they’re used to, such as relationship building. People ultimately buy from people, so how can you understand the real value of your relationships from the data?

“You can send out thousands of emails a day, but you need to look at how conversations and messages are helping you develop a relationship, make it stronger and then tie that back to opportunity progression and/or conversion.

“It’s harder than ever to cut through the noise because of sales outreach and acceleration platforms, so we have to look at and track more mediums than ever before. You might see your customer acquisition costs increase by a small percentage, but that could have a much bigger impact on your revenue.

“Transforming analytical data into something sentiment based and human focused makes it more relatable to sales and commercial teams by bringing it back to relationships.

“It becomes a compound tool to quantify relationships where you can look at the impact of technologies, enablement and coaching on the bottom line by seeing the improvement they trigger versus a baseline of speed or quality of relationship improvement.” 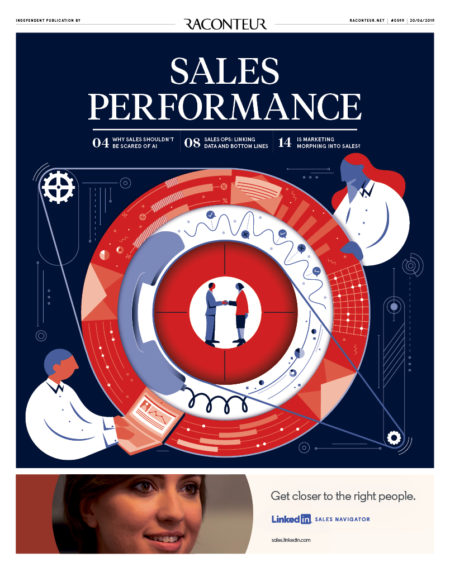 Why salespeople should not fear AI

How sales organisations should deal with the tech revolution