Would you stay at home if you knew your street was going to be lined with a series of posters spoiling the must-see Netflix show you had spent hours, or days, binge-watching? That was the question two international Miami Ad School students in Hamburg asked themselves in March while trying to dream up a campaign to encourage people to take social distancing seriously.

When Seine Kongruangkit and Matithorn Prachuabmoh Chaimoungkalo, known as Brave, returned to their native Thailand, the coronavirus outbreak was reaching its peak in their country. Dismayed by how poorly their government was enforcing lockdown rules, like all good creatives they took matters into their own hands.

The result was a speculative out-of-home (OOH) advertising campaign for Netflix that ended up delivering against the odds.

In late-March, the internet blew up with people sharing mock-ups featuring posters in situ at bus stops, tube stations and which ruined pivotal plot twists from Narcos, Love Is Blind and Stranger Things, alongside a simple piece of copy: “You should’ve #StayedTheF***Home”.

Publishers the world over covered the viral marketing stunt, some believing it to have been devised by Netflix itself. It was also widely lauded on Twitter, with one reviewer asserting: “Netflix flashing spoilers to keep people inside is the most millennial thing I’ve seen so far.”

Unfortunately for Kongruangkit and Brave, Netflix failed to give their brainchild the greenlight, but the pair say the success of the hoax should be a lesson for marketers that creative risks can pay off big time. Especially when OOH advertising is the medium.

“It’s really important for brands to own these spaces,” says Brave. “I can think of so many ways advertisers can amplify OOH in a digital way. People are online all the time, they’re flooded with content on their phones, but if brands can sell a solid idea somewhere outside, it can really touch people in a way they might not expect.”

Kongruangkit agrees that outdoor still has a huge role to play, even in empty cities, if marketers can cleverly build it into an omnichannel strategy: “OOH isn’t just OOH anymore, there are so many places for it to be seen.”

Early in 2020, a report from GroupM predicted OOH advertising would surpass newspaper ad spend, with the global market forecast to hit $40.6 billion within the next calendar year.

OOH’s boom has been buoyed by a growing network of digital billboards, which allow brands to reach more targeted audiences and measure the medium’s impact more thoroughly than static sites previously allowed.

And yet old-fashioned print posters have been having a moment too, acting as a bridge between the physical and digital. Notable campaigns have included the BBC’s Public Displays of Obsession, designed to promote series three of of Killing Eve in 2019 by driving viewers to a dedicated #Crazy4Eve hashtag on social media.

Burger King’s Mouldy Whopper posters, which drew both reverence and revulsion online after crudely highlighting the brand’s aversion to preservatives, also launched via a series of billboards in global cities.

It might not get many drive-by viewings, but get the creative right and it could still make you famous

The response to these creative executions showcases the power of traditional OOH as a channel that can be seamlessly transferred to digital marketing and public relations.

Ian Henderson, creative and chief executive of ad consultancy AML Group, concurs: “When I was learning to write ads, posters were always the test of a good campaign idea. Creating a viral marketing stunt is a really hard thing to do, especially when there’s no one out there to see.”

Henderson believes CMOs should draw inspiration from politics if they want their OOH work to leave a digital footprint, pointing to the success of anti-Brexit activists Led By Donkeys in this area. The trio of artists, armed with a ladder, roller brush and a treasure trove of damning contradictory statements from senior Westminster figures, have found fame online after erecting 40m x 20m banners across the UK.

“The lesson for CMOs here is clear: it’s still all about ideas and if the idea works on a poster, it’ll work anywhere. If it’s good enough and brave enough, and you have the right amplification channels in place, the return on investment can be enormous,” he says.

However, though lockdown is easing in certain markets, the reverberations of COVID-19 threaten to derail OOH’s moment in the sun. Clear Channel Outdoor, Ströer and JCDecaux have all outlined cost-cutting measures, with more than 2.6 billion people, or a third of the world’s population, in confinement by late-March.

Meanwhile, CMOs are already tightening their belts, with the Institute of Practitioners in Advertising estimating UK marketing budgets have declined at their fastest rate since the 2008 global financial crash.

Jamie Williams, managing partner at independent creative agency Isobel, says while outdoor might seem pointless for brands right now, the sense of occasion that comes with leaving the house means OOH ads have an opportunity to be more relevant than ever.

“If brands can tap into the right insight and be smart with their creative, engaged and suitably entertained consumers who are exposed to it might just share it,” he argues.

“A single piece of OOH can be seen like a one-off airing of a showcase TV ad, used to drive PR and fame on social media, rather than just TV reach. OOH is obviously so easy to photograph and share that it’s a huge opportunity for brands to create fame with a relatively small media investment.

“It might not get many drive-by viewings, but get the creative right and it could still make you famous.”

Indeed, ghostly OOH advertising epicentres, such as London’s Piccadilly Circus and New York’s Times Square, have become focal points in the pandemic, even in the absence of pedestrians. The Queen’s image and message of hope lit up the former in April, while the Big Apple’s most famous screens have been used to display thanks to key workers.

For freelance creative lead Nathalie Gordon, while lockdown has shown OOH still to be a valuable investment, marketers need to ensure they aren’t getting complacent about how they use it.

“What was, a month ago, a flurry of organic – no brief, often no brand –  reminders of the power of OOH and its format, has become tired again,” she says, arguing creatives have become a little lazy.

“More and more people have seen the impact – online fame – it can have and are trying to use OOH to say the same things, but in different ways to little or no effect. There’s only so many times you can see a ‘stay home’ poster.”

There’s no question that the current climate opens the door to a range of brands willing to be brave, provocative and engaging. A decrease in ad budgets is driving down the price of big-ticket media buys, which presents a huge opportunity for brands to go viral for a relatively small sum.

However, if they aren’t smart about the creative material they plaster on the outside world, then advertisers will soon find themselves out in the cold. 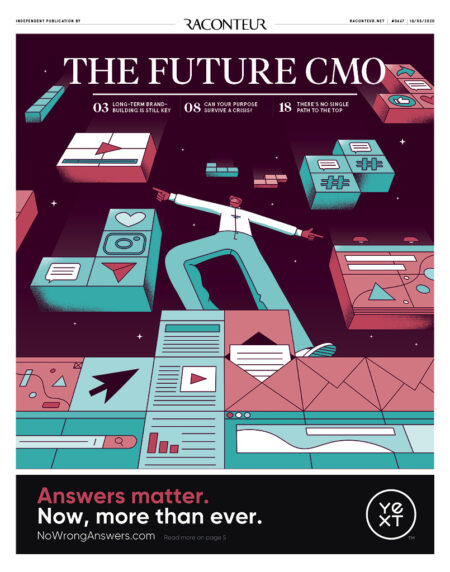 Three themes for the future of marketing

Future-fit marketing in a changing climate

Why marketers must look beyond the current crisis