Stimulating the heart to repair itself is within scientific touching distance, thanks in large part to the work of Professor Paul Riley (pictured) and his team at Oxford University

Almost 500 people suffer a heart attack every day in the UK and seven out of ten survive. But the uplifting statistic masks a deeper problem in that most will join the 550,000-strong ranks of people living with debilitating heart failure. 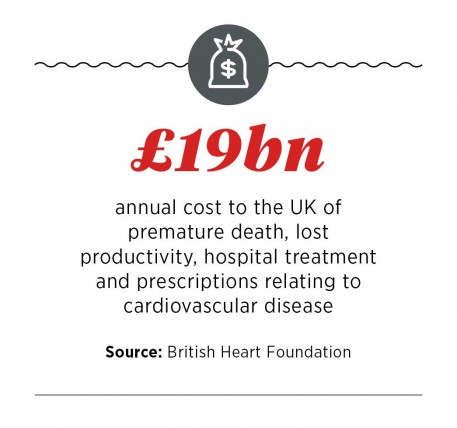 stimulate the heart to repair itself and regrow naturally.

It seems that nature has been kind by ensuring some of the cells that cause the heart to form in the embryo persist in adulthood, although they stay dormant during the ageing process when the heart deteriorates.

But scientists have discovered a method of re-activating some of the cells to create new heart tissue that could have a curative impact on diseased hearts and generate an improved quality of life to those who normally would have been consigned to a slow-paced decline.

Heading in the right direction

“It is very exciting and, although we are not near a cure yet, we are heading in the right direction,” says Professor Paul Riley, of the University of Oxford, whose work has identified the trigger to get the cells from the epicardium, the outer layer of the heart wall, to regrow blood vessels and heart muscle.

His team’s laboratory work found the protein thymosin beta-4, which is an important factor in cell proliferation and migration, could effectively be used to remind the adult heart about its embryonic programme and start producing the cells that could repair damage from heart attacks.

Research in the United States at Stanford University has identified another protein, also naturally present in the epicardium, which they hope can be placed into a patch on the heart after an attack to minimise the scarring and improve function. Its first clinical trials are slated for two to three years’ time.

“People are increasingly living with heart failure after surviving their initial heart attack and it is a huge burden on society. The figures for loss of productivity and the cost to the NHS are pretty horrendous,” adds Professor Riley, who has the chair of development and cell biology, Department of Physiology, Anatomy and Genetics at Oxford.

“Our focus is understanding how the heart develops in the embryo during pregnancy. We are trying to understand how the heart is built in the first place so that we can rebuild it in the diseased adult setting. The embryo and foetus give us all the clues we need.

“We have focused on cells that still reside in the heart, but have switched off most of their function because they are not required for further growth. They have simply done their job and now lie dormant.”

The role of zebrafish

Encouragement that heart cells could regrow naturally was given a boost in the US by Professor Kenneth D. Poss, a cell biologist at Duke University, who discovered the zebrafish has a way of regenerating its heart after damage and that the epicardium played an essential role in this process.

In reports published in the journals Nature and eLife earlier this year, Professor Poss and colleagues explained that the molecule, neuregulin1, made heart muscle cells divide in response injury in zebrafish. A key finding was that the heart could be stimulated into creating more muscle cells by boosting this molecule even without injury.

“Studies of the epicardium in various organisms have shown this tissue is strikingly similar between fish and mammals, indicating that what we learn in zebrafish models has great potential to reveal methods to stimulate heart regeneration in humans,” says Professor Poss.

Unwinding the complex trail from the zebrafish and Professor Riley’s clinical work could lead to a process where human heart regrowth could be primed both before heart attack, as a preventative measure for vulnerable populations, and after to save lives and improve the quality of life.

Identifying a route to kick-start cell regrowth is only the beginning as Professor Riley, and others, also have to decode complex relationships between cells, proteins, molecules, scar tissue and the immune system, which becomes significantly active during and immediately after a heart attack.

The heart’s response is to patch up damage with scar tissue which is less flexible than the original tissue and causes the heart to work harder to function and this can lead to heart failure.

“We have to consider challenges such as reducing the scarring process, without risking rupture, to enable more room and compatibility for new cells to integrate and create new tissue,” says Professor Riley, who is also British Heart Foundation professor of regenerative medicine. “You cannot just stimulate these cells to repair and not worry about the inflammatory process and the local environment.”

But the reaction of the lymphatic system, which is forced into emergency action during a heart attack, has provided a further bonus. It is prolific at fluid drainage and lipid transport through its blind-ended vessels, but could also have a key role in moderating attacks.

“When a heart attack is induced these vessels expand and undergo something called lymphangiogenesis, which leads to sprouting as a compensatory mechanism to help get rid of the oedema and fluid retention, and clear damaging immune cells after an injury to the heart. It is a natural injury response and we have found that, with added growth factor to improve this process, heart function was improved by up to 50 per cent in our animal models,” says Professor Riley.

“We don’t yet know at what time point this happens, but we are currently trying to understand the mechanisms so that we can provide the right stimulus at the right time.

“The relief for those people living with heart failure downstream from heart attacks is likely to be a cocktail of treatments that stimulate a range of tissue restoring cells along with modulating the immune response and control of the scarring.

“It could also be used as a preventative treatment to strengthen hearts by giving thymosin beta-4 to people identified with high blood pressure, high cholesterol, potentially hypertensive and those with a genetic history of heart disease. There are many issues to solve such as ensuring the treatment does not interfere with other organs, but it could be used to prime people at risk.”

Drug development time is notoriously lengthy and full of setbacks, but Professor Riley believes that repurposing existing drugs could halve the time taken from discovery to approval.

Further work is being carried out and fundraising is under way for a unique £35-million Institute of Developmental and Regenerative Medicine in Oxford, as a collaboration between the university and the British Heart Foundation. The new institute would bring 200 researchers together working across different organ systems, immunology and paediatric medicine.

“If the institute becomes a reality, our research discoveries could trigger a revolution in cardiovascular medicine,” says Professor Riley. “My vision is a world where heart damage is temporary and repairable.”

The British Heart Foundation, which supports his work, concludes: “Professor Riley’s research offers the hope that within a decade we will be able to teach damaged hearts to repair themselves so that we can help the UK’s heart-failure sufferers.”