The triumphs of modern medicine have ushered us to an age when the over-sixty-fives are about to outnumber the under-fives for the first time in history. The most startling statistic in a generation of unparalleled advances is that when the NHS was founded in 1948, 48 per cent of the population died before they reached 65; that is now down to 14 per cent.

By 2030, around 20 per cent of people in England will be over 65 and stretching the official pension age offers at temporary barrier to the economic jeopardy flowing our way.

Today’s 20 year olds have a one in five chance of living to celebrate their 100th birthday compared with their 50-year-old parents whose likelihood of reaching the milestone is one in ten. Around 20 per cent of 30 year olds will be alive into their 90s, but that venerable age is likely to be weighted with multiple chronic conditions. 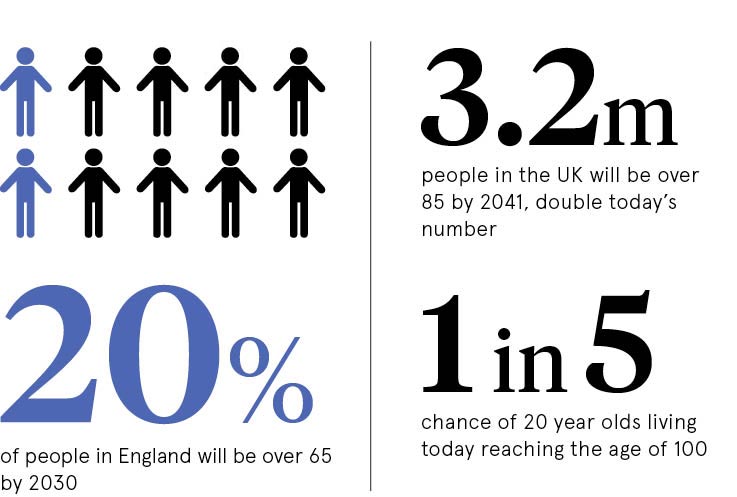 The burden of cardiovascular disease, type-2 diabetes, lung cancer and dementia will only intensify with the Office for National Statistics forecasting that by 2041 the number of people aged 85 and over in the UK will double to 3.2 million.

According to Margaret Chan, former director general of the World Health Organization, old age has become “the new normal” and healthcare systems “are ill-prepared to manage diseases requiring long-term if not lifelong care”.

The message was underscored by the charity Age UK’s warning that although current 65 year olds can on average expect to live another 25 years, only 11 of those will be spent in good health.

The need for a new approach, based on prevention, societal change and featuring technology, is immediate.

The government’s Five-Year Forward View, published in October 2014, states: “If the nation fails to get serious about prevention then recent progress in healthy life expectancies will stall, health inequalities will widen and our ability to fund beneficial new treatments will be crowded out by the need to spend billions of pounds on wholly avoidable illness.”

But getting society to shift behavioural patterns is a holy grail that stands in a haze on the horizon. Injecting money to maintain a straining system has little chance of success so responsibility not only falls on the government, agencies and charities, but also society.

“With the rising age demographic comes increase number of chronic diseases such as diabetes and cardiovascular disease and that will increase the healthcare costs as people will have these diseases for longer,” says Leena Alanko, a researcher at the Finnish think-tank Demos Helsinki, whose Health 2050 report advocates preventative healthcare.

“These diseases are already affecting today’s society; it is not possible or even reasonable for society to provide care for everyone which is why we need a new system.”

This, she adds, should include transport, housing, town planning and harness the power of technology to both diagnose and monitor health as well as energise behavioural change.

“It will be the biggest social change in history,” says Aleksi Neuvonen, Demos Helsinki founder. “We have a small window of opportunity and the intervention has to happen before this cohort of people get very old. Hospital care is very expensive and we have to counter that by instilling preventative health in young people and even children.”

It is likely that the cavalry to save our health will need to emerge over several hills and the government’s commitment to sugar tax on fizzy drinks from April 2018 is an example of one attack route.

Public Health England has also challenged the over-65s to follow “productive healthy ageing” with practical advice to improve lifestyles and keep them out of hospitals.

Health initiatives are being matched by a sweep of innovation recalibrating every aspect of our contact with health, from booking GP appointments to managing cancer at home and supporting people with complex conditions.

“We are seeing a drift towards people being more responsible with their health because technology makes it easier,” he says. “People can now become involved with their appointments and treatments rather than being distant and leaving it all to a healthcare professional. Changing behaviour is a big task, but there is hope.”

Taunton and Somerset NHS Foundation Trust, one of twelve digital exemplar hospitals forging a blueprint for future tech-influenced care across the NHS, is piloting a number of projects including a scheme with Google’s DeepMind Health aimed at delivering faster and better care via an app. The NHS is far from a sitting target.

Collaboration with technology and pharmaceutical firms is now commonplace across the NHS with the aim of improving access to treatment, streamlining systems, eliminating waste and encouraging the public to take more responsibility for its own health.

But how life will look for the battalions of 90 year olds, who will become a large population sector, depends on factors radiating across health, economics and politics and, while scientists continue to amaze with discoveries, the answers lie in more prosaic strategies that make it easier to eat healthily, walk, run and play.

The scale of the looming problem may be mountainous, but it is inspiring fresh, progressive thinking exemplified by the Institute of Mechanical Engineers’ quest for better designed homes with assistive technology.

“Contrary to popular belief, our growing ageing population is becoming more tech savvy and this will only increase in the decades to come,” says Dr Helen Meese, lead author of its recent Healthy Homes report.

The NHS was established to deal, principally, with episodic care: you fall ill, it fixes you. As it approaches its 70th anniversary, the hope is that society can prevent itself pushing this cherished institution into the history books.