New technology can offer a cure for the NHS

The NHS was founded on a wave of optimism following the Second World War when the UK population was 50 million and the average life expectancy was 65.8 years for a man and 70.1 for a woman.

In most measures, it has been a towering success. Public health education and vaccination programmes have drastically reduced disease burdens and our life expectancy has risen to 79.5 years for men and 83.2 for women. 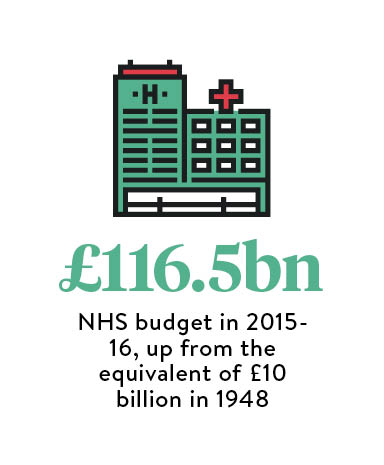 But the NHS is almost a victim of its own success as it copes with a population of 65.1 million, featuring an over-65 age group that has increased by 21 per cent in the last decade. Although its budget has increased from the equivalent of £10 billion in 1948 to £116.5 billion for the current financial year, it is straining at the seams.

Even though the NHS is an institutional supertanker, with 1.3 million employees dealing with one million patients every 36 hours, there is hope it can be navigated away from financial disaster with the use of a suite of technologies that can revoluntionise healthcare delivery.

Apps, telemedicine, and trackers and monitors linked to smartphones open up a new landscape of patient engagement that could drive the biggest hammer on health costs – prevention. From genomics to text messages, the big players IBM, Google and Philips are investing heavily in research and development as healthcare technology surges from a cottage to powerhouse industry.

The time is right to adopt new technology

Its white-heat potential has been captured by NHS England chief executive Simon Stevens who launched a fast-track programme to bring leading-edge technologies to the health service front line. Announcing a range of measures to encourage innovation, he rallied the NHS Confederation Conference in Manchester: “Now – at a time when the NHS is under pressure – rather than just running harder to stand still, it’s time to grab with both hands these practical new treatments and technologies.”

More needs to be done to release the bureaucratic choke-hold preventing the venerable health service transforming into a slick, responsive performer

His aim is to accelerate uptake of new medtech devices and apps for patients with diabetes, heart conditions, asthma, sleep disorders, and a sweep of other chronic and lifestyle health conditions by excising red tape, boosting the NHS Innovation Accelerator programme and encouraging partnerships across health, industry and academia.

Johnny Marshall, policy director for NHS Confederation, which represents the organisations and managers that deliver NHS care, was in the audience that welcomed Mr Stevens’ rattling keynote speech in June. “The government has put aside some money for NHS innovation, but when considering the scale of transformation and investment in infrastructure that the NHS needs, it is not enough,” he says.

“Leaders from New York State’s $54-billion Medicaid service, who know a thing or two about these things, are among those encouraging the NHS to keep innovating, not despite the strain on the NHS, but because of it.”

Funding aside, the fundamental challenge is to make sure that, when the giants of technology and the supercool startups unpack their shiny new healthcare tools, the public can actually understand and use them to make significant changes to their health and prevent debilitating lifestyle conditions.

Mr Marshall advocates an “innovation pathway” to steer digital innovations through development, approval, value-for-money assessments and adoption. “It’s important to remember that innovation is not simply a matter of testing out new devices, it is about empowering citizens to be better able to care for themselves and engage in decisions about their care,” he says.

Harnessing the full benefits of new technologies will also require a “monumental” change-management programme, according to Lee Francis, director at healthcare IT providers Trustmarque. He believes NHS boards and managers must prioritise IT literacy across the workforce so innovation can reach patients swiftly, safely and effectively.

Mr Francis highlights that many community trusts have electronic patient records, but poor data coverage means staff are still handwriting clinical notes. “This shows how such obstacles present a real threat to digital transformation,” he adds. “This risks stopping healthcare innovation from getting to the patients that need it most.”

The scale is there. Around 275 million patients globally are tracked by Philips monitors, in clinical and lifestyle settings, which provide data that can help treat complex conditions and enable people to live independently with multiple conditions, says Jeroen Tas, the company’s chief executive for connected care and health informatics.

That data, when refined, can make a difference, but the public must be involved. “Patients, care providers, payers and other stakeholders need to collaborate, and create a shared understanding and vision on how best to apply digital technologies in meaningful ways,” says Mr Tas.

Technology is already proving a salvation for NHS services and budgets. When Pennine Care NHS Foundation Trust redesigned its protocol for wound infections, by using text messages to encourage self-management backed up by nursing care, it reduced patient appointments by 53 per cent with 100 per cent patient satisfaction.

The road to a new, wired and connected health service and a revolution in public responsibility will be bumpy, but establishing the NHS in 1948 was far from easy.