The government this month announced a new £300-million plan, including a new hub for the UK Dementia Research Institute, to support the ten million people in Britain who are expected to live to 100. At present the UK has just 50,000 centurions.

This followed World Health Organization predictions that the number of people with dementia will rise from nearly 50 million today to 82 million by 2030 and 152 million by 2050. For the first time dementia has overtaken heart disease as the UK’s number-one killer. 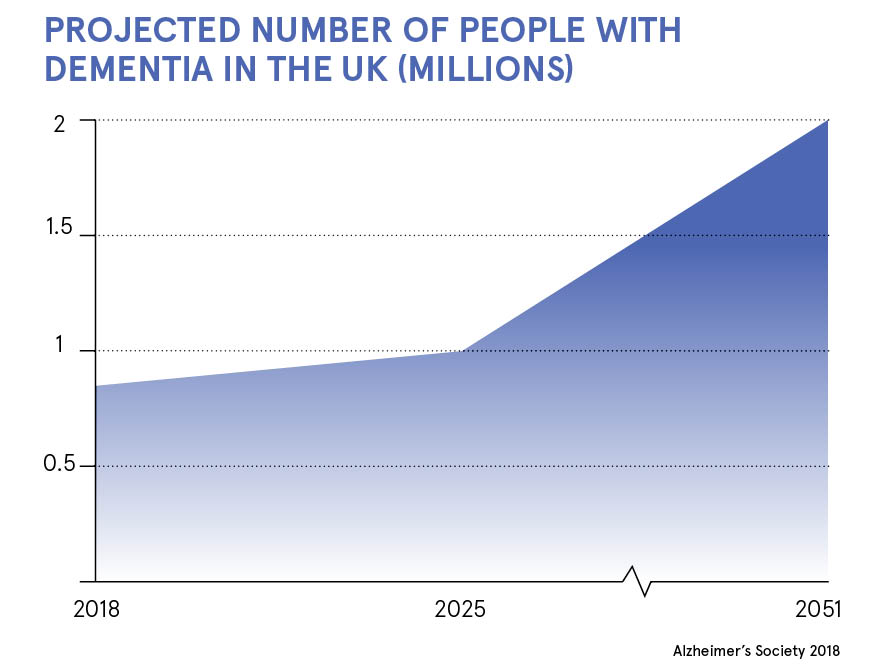 The institute is researching all forms of dementia, including Alzheimer’s disease, Parkinson’s disease and vascular dementia. Care as well as cure is a research priority in recognition that in the absence of a cure, the immediate challenge is to improve the quality of life of people with dementia.

The recent decision by Pfizer, the world’s largest drug company, to pull out of Alzheimer’s disease research highlights the vast challenge to develop drugs to treat disease in the brain, the body’s most complex organ.

Dr James Pickett, head of research at the Alzheimer’s Society, says: “With no new drug in the last 15 years, this will come as a heavy blow to the estimated 46.8 million people with the condition across the globe.”

But there are reported to be about 100 ongoing dementia trials. About 20 per cent of these involve so-called repurposed drugs, which were originally developed to treat other diseases. Using “old for new” medicines sidesteps the vast cost, estimated at about £1.5 billion, of developing new drugs. Repurposed products also already have well-established safety records and, unlike new compounds, don’t take up to 15 years or more to reach the market. 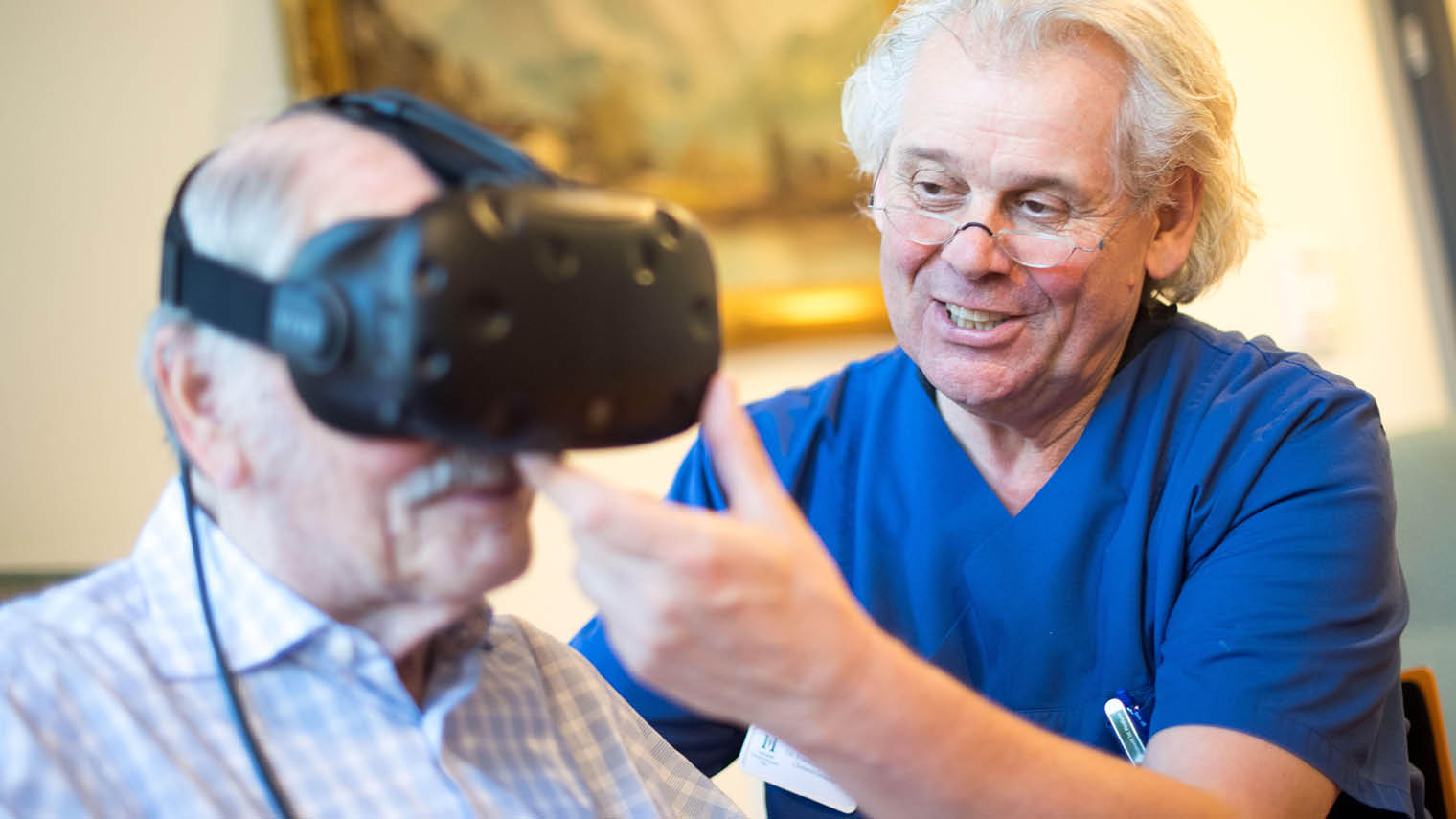 German geriatrics physician Friedhelm Caspers trialling a dementia patient with virtual reality; the technology immerses patients in scenes of their childhood in an attempt to engage and connect users with happy memories

Recent UK trials with repurposed drugs have involved the world’s first clinical study of a Viagra-style drug for treatment of dementia. Tadalafil, better known by its brand name Cialis, works in erectile dysfunction by increasing blood flow to the penis. The hope is that it will also increase blood flow to the brain. Vascular dementia is caused by damage to small blood vessels in the brain, resulting in reduced blood flow. 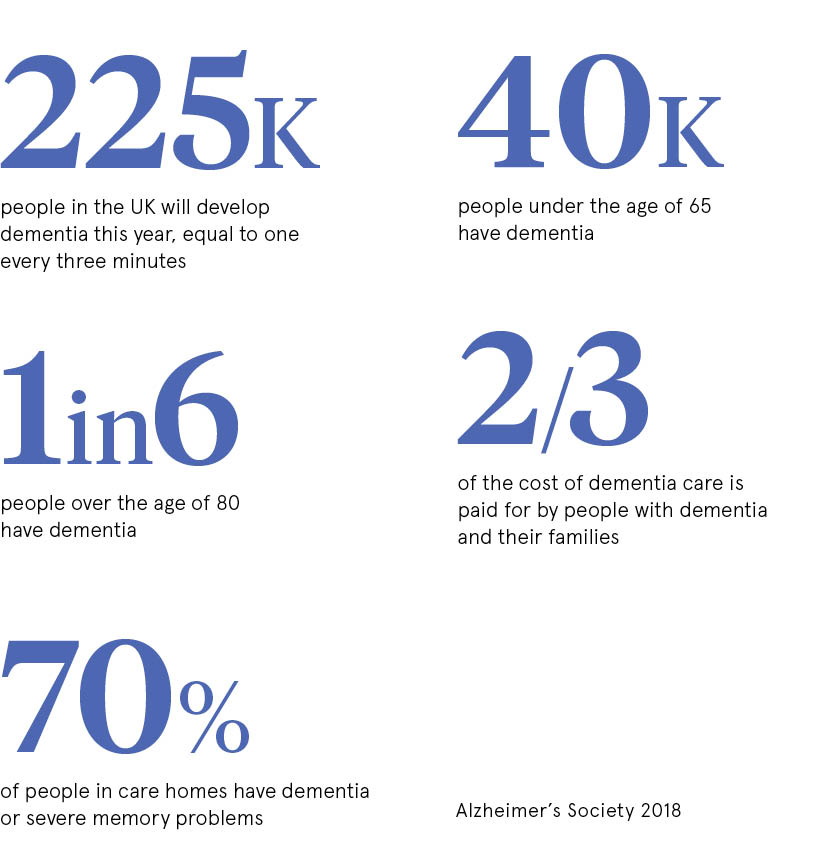 UK scientists are also evaluating the diabetes drug liraglutide in the treatment of Alzheimer’s disease. Both conditions are associated with misuse of glucose in the brain and with sinister abnormalities known as beta amyloid plaques. The study is due to end in 2019.

Stem cells have the potential to develop into any type of cell in the body, and detect and repair damaged cells. Early animal studies into Alzheimer’s disease generated immense excitement, but a report in the journal Stem Cell Research Therapy warns: “Researchers must be aware of the perilous gulf… between rodents and humans.”

Alzheimer’s disease in animals, it adds, had been effectively treated in about 50 different ways, but these results had yet to be replicated in humans. However, the report concludes: “Stem cell therapy for Alzheimer’s disease carries enormous promise.”

Stem cells are also helping Cambridge University scientists learn more about Alzheimer’s. They are taking skin cells from people with rare forms of the disease and using cutting-edge stem cell techniques to turn them into working nerve cells. Remarkable as it may seem, they resemble dementia-damaged cells.

Four hundred people with dementia are taking part in a two-year “smart home” study to test technology that monitors their health remotely. The idea is to enable them to stay safe and well, live longer in their own homes, reduce hospital and care home admissions, and relieve stress on carers.

Sensors installed in patients’ homes measure their movement and let clinicians know, for example, if they fall. A GPS tracker will sound an alert if they wander too far from home.

The TIHM (technology integrated health management) study is even identifying people with urinary tract infections (UTIs), enabling them  to be treated quickly at home. UTIs are one of the top five reasons for unplanned hospital admissions among elderly people. The others are respiratory infections, falls, strokes and fractures.

Surrey and Borders Partnership NHS Foundation Trust are due to publish the results of the study, which ends this Saturday, later in June.

We look to technology to discover dementia treatments, but paradoxically technology of different kinds has exacerbated the impact of dementia. We are living through a head-on collision between progress and evolution in which we “save” our legs by taking the lift at the expense of our hearts and brains.

Last year the government reported that more than a quarter of UK adults were obese. A further 36 per cent were overweight. Carrying excess fat increases the risk of dementia. Lifestyles have changed, but our bodies still thrive on the stimulus of exercise. Regular heart and brain workouts and healthy eating and drinking could achieve far more than “miracle drugs” to safeguard us from the horrors of dementia.

Dr Walton of the Alzheimer’s Society has encouraged her own mother to play table tennis. “She’s become really keen and feels a lot fitter. It’s the kind of simple activity that can have a huge impact,” she says. Being part of a social network, such as a table tennis club, can also reduce dementia risk, the Society advises.

Alzheimer’s Research UK is optimistic that an effective treatment could be available in three years and a “vaccine” that prevents the disease within a decade, adding that there are 12 drugs in the final stages of clinical trials.