Experts fear the nation is stumbling towards increased levels of sight loss — which already costs the nation £28.1 billion a year in lost productivity and health costs — one contributing factor to this is a lack of awareness of the elevated risk to sight from being overweight.

Studies have identified poor diet, obesity and type 2 diabetes as heightened risk factors for a range of conditions including glaucoma, cataracts, age-related macular degeneration (AMD) and diabetic retinopathy — one of the  leading causes of blindness in the working population.

Further research is needed to establish direct links but the eyes are put under increased strain from high blood pressure, oxidative stress and disordered lipid metabolism, which are all associated with weight levels above guidelines.

“It is not well known or appreciated that obesity is linked to these eye conditions and when you inform a patient that their high blood pressure may be the cause of their retinal vein occlusion, they are often mystified,” says Ananth Viswanathan, a consultant ophthalmic surgeon at Moorfields Eye Hospital in London.

“People tend to dwell on the secondary effects of obesity such as stroke, heart attack, kidney damage, and rightly so. But there needs to be awareness of the risks to eye health, particularly as vision is the sense most people treasure. There is a very well-known link between obesity and type 2 diabetes, a condition that causes significant eye problems,” Mr Viswanathan explains.

Obesity can cause cortical cataracts, a condition where light is scattered by a defective lens, and the adipose tissue present in excess weight releases a chemical called leptin, which is a source of oxidative stress that can damage the eye, he added.

“The lens really has only one response to any kind of stress and that is to go cloudy so it forms a cataract. It is probably this oxidative stress mechanism that is behind the link between obesity and age-related macular degeneration,” says Mr Viswanathan.

Raised blood pressure associated with obesity and type 2 diabetes can also lead to higher intraocular pressure on the nerve at the back of the eye making it more susceptible to glaucoma.

“We have seen a huge increase in cataracts, glaucoma and macular degeneration because of the population demographics of more older people and more older, obese people,” adds Mr Viswanathan. “We had to open a new department to deliver injections for wet AMD because we were struggling to keep up with demand for services. In glaucoma, we are doing at least 30 per cent more work than we did five years ago.”

Dr Louise Gow, specialist lead in eye health at Royal National Institute of Blind People, explains: “The public is not so aware that poor lifestyle and obesity has an impact on eye health. People don’t necessarily make the link between diabetes, high blood pressure and vision problems. The eye is a very delicate structure, governed by its blood supply and if that is disrupted and blood vessels are affected your vision can be damaged. But simple diet and lifestyle changes can reduce the risk of getting diabetes and high blood pressure.”

Almost 3.7 million people have been diagnosed with diabetes in the UK and up to one third of the population has pre-diabetes, according to Dr Campbell Murdoch, a GP in Somerset and chief medical officer for diabetes.co.uk, a support website with 600,000 members.

“It is important to highlight that this is not a one-way conveyor belt to further problems,” he says. “It can be slowed down, stopped and even reversed with lifestyle changes.

“Retinopathy is when small blood vessels in the retina are damaged by high blood pressure, but regulate the blood sugar levels to as near normal as possible and the risk is drastically reduced. Anecdotally, we have seen cases of the eye repairing itself when those levels reduce with a low carb diet and exercise.

“Awareness of this needs to be constantly reinforced and every patient with diabetes or pre-diabetes needs to discuss it with their GP,” Dr Murdoch continues. “Not having that conversation is unethical, in my mind.  It is still not happening enough, but this approach has skyrocketed among GPs over the last year. We know it works and we can give people a sense of hope rather than saying ‘you’re broken, have some more drugs and we’ll see you  next year’.”

The national diabetic eye screening programme, introduced across the UK from 2003, has had a significant impact with research by Swansea University last year reporting that it has contributed to a halving of the  number of people going blind from diabetic retinopathy.

The programme tested 2.25 million people, aged 12 and over, with diabetes over 2016 and 2017, reaching 82.4 per cent of the eligible population. Its success has meant that for the first time in 50 years diabetic eye disease is no longer the leading cause of blindness in adults of working age. 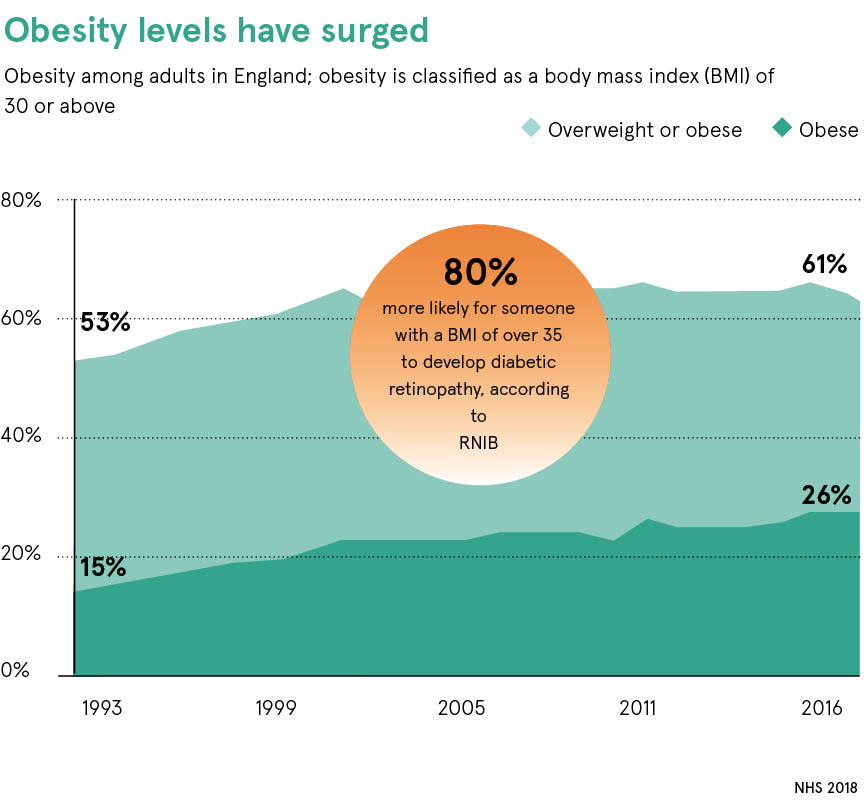 Dr Susan Blakeney, clinical adviser at the College of Optometrists, said the programme, along with  regular eye tests, is vital to reducing the burden of sight loss,  particularly among young people, as it identifies problems before symptoms become obvious.

“It has had a huge impact,” she says. “People also need to remember that what is good for your body is good for your eyes and not to think of the eyes in isolation. I don’t think there is anyone who thinks that being overweight is good for them; it’s not.

“It is important to have regular eye examinations because sometimes high blood pressure is picked up at the back of the eyes which is an indication that you have cardiovascular factors that need to be addressed.”

Dr Blakeney adds: “AMD is now the leading cause of sight loss in the UK and obesity is a risk factor. The major thing you can do to reduce your chance of developing it is not to smoke, maintain a healthy weight and eat lots of colourful vegetables.”