We’re having a love affair with high-tech home beauty devices, but what does this mean for clinics and consumers?

Over the last two decades, there has been a revolution in beauty. Treatments involving needles, sound waves, lasers and lights to rejuvenate skin and remove hair have become available in high-street clinics and salons, creating a billion-pound industry.

So it’s not surprising that manufacturers have responded by marketing high-tech gadgets for home use that claim to offer clinic-style results.

These range from electric face brushes to laser and intense pulsed light or IPL devices, LED light treatments, dermabrasion and micro-needling. Trusted brands such as Phillips, Remington and Boots are all tapping into the trend and companies like Clarisonic have become household names.

According to market analysts at Mintel, the value of the UK beauty devices sector is estimated to have risen by 2 per cent in 2016 to £317 million, almost £80 million more than the hair appliances sector. At present 38 per cent of adults in the UK use a skincare device and it’s likely to increase. Mintel reports 28 per cent of women who haven’t bought a beauty device in the last two years are interested in purchasing one.

This could be bad news for clinics, says Roshida Khanom, senior beauty and personal care analyst at Mintel. “Our data shows that spas, salons and in-store treatments only saw a 0.3 per cent rise in value in 2015,” she says.

“Innovation in beauty devices has seen them become more sophisticated and easier to use, while manufacturers are also catering to those on smaller budgets. With the most popular beauty devices being facial-cleansing and hair-removal devices, the professional sector is likely to see competition in these areas in particular.”

Indeed, Dr Weber says home devices often act as an introduction to clinical treatments. “We see patients are disappointed with their results or find the devices too time consuming, so opt for treatments with more powerful clinic-based devices,” he says. 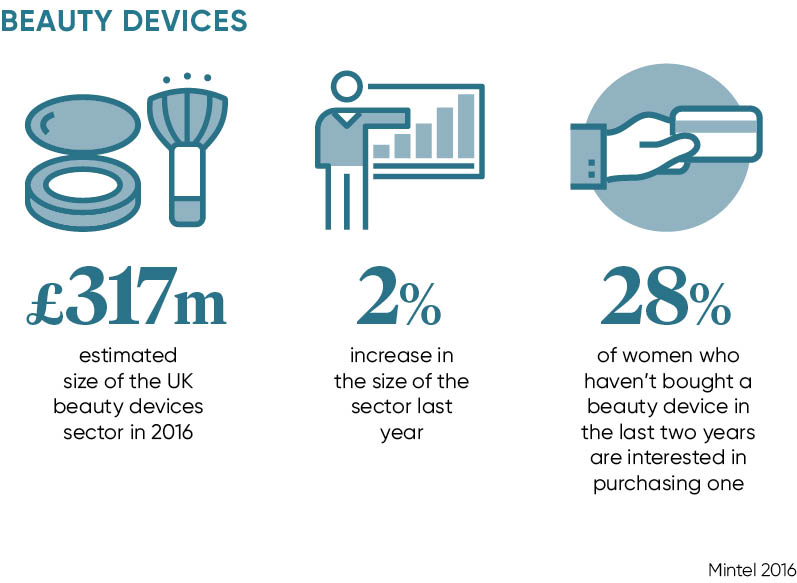 While this crossover may initially have been accidental, the trend is for home devices to work with clinic treatments.

Inge Theron is founder of FaceGym facial rejuvenation system, which launched in Selfridges in London in 2015 and has a standalone studio in Chelsea. She has also created an electrical muscle-stimulating device, FaceGym Pro. “I see the FaceGym Pro as perfectly synergistic with our service model. It’s like doing yoga at home in between lessons,” she says. “We see beauty gadgets as a pivotal part of our business and are aiming to grow the category within our retail matrix in future.”

Some gadgets carry serious risks, especially if bought over the internet instead of from a reputable brand

Colette Courtion, founder of VSculpt, a new device for pelvic floor tightening and vaginal rejuvenation using LED light, heat and sonic vibration, says as well as being offered direct to consumers, her device will be sold in clinics. “It can help maintain the results of expensive clinic treatments,” she says.

Tatiana Lapa, medical director of The Studio Clinic, recommends several devices, including red light therapy devices such as Baby Quasar, the LUNA facial cleansing device and home micro-dermabrasion kits, including those by PMD, though she warns patients to be gentle with the latter.

Dr Patterson agrees: “The tendency is to see them as mild devices, but if used too frequently, the result is increased sensitivity.” He also warns of the risks of combining unsupervised invasive treatments with products. “Needling increases the penetration of topical products such as serums and moisturisers,” he says. “If those ingredients aren’t designed to be in the skin, then irritation may result.”

Dev Patel, medical director of Perfect Skin Solutions in Portsmouth, says: “Dermarollers are often used at home, but due to their rolling action cause a lot of unnecessary epidermal trauma. A clinic’s vertical micro-needling systems would not do this and can penetrate deeper into the dermis.”

Dr Lapa says more education is required to prevent consumers buying the wrong device for their skin type. “Micro-needling, for example, can worsen acne and rosacea,” she says. “Using a cleansing brush too roughly can worsen pigmentation.”

Some gadgets carry serious risks, especially if bought over the internet instead of from a reputable brand. Dr Weber cautions: “We see patients who have been burned by cheap devices.”

Dr Patel concludes: “My advice is to encourage home treatments, but to do this under expert guidance and advice, to ensure a safe and cost-effective approach. The average consumer spends just over £350 on skincare and beauty treatments annually. Even with this budget, you can combine clinic and home treatments to achieve healthier skin.”