The advent of do-it-yourself DNA-testing kits, offering consumers a genetic health and ancestry profile based on a saliva sample sent in the post, has prompted beauty brands to follow suit.

In the past DNA tests involved significant money, labs and long lead times – and that seemed sophisticated enough – in order to map the single nucleotide polymorphisms or SNPs (pronounced snips), which are the unique variations in an individual’s DNA sequence.

Now technological advances are making anything possible from DIY testing to in-store experiences promising bespoke gene-creams formulated from your DNA profile – that is if you want to hand over your DNA, of course, which can be an ethical step too far for some.

The device, which won Professor Christofer Toumazou, founder and chief scientist at Imperial College London’s Institute of Biomedical Engineering, the European Inventor of the Year award in 2014, took ten years of research and is also being used in the medical world. It allowed Geneu to launch an in-store DNA analysis of customers’ skin and, together with the results of a lifestyle aassessment, to formulate bespoke double serums to match.

In a similar, albeit skincare-specific vein, Ruthie Harper, a Texan-based board-certified specialist in internal medicine, has developed SkinShift, an at-home DNA test that looks at 32 SNPs, having started with 16, which influence skin ageing. For a more prescriptive approach, Dr Harper also uses the test to gather patient information at her clinic.

“We concentrate on analysing well-understood genetic markers of healthy skin: how successful an individual makes and maintains collagen; how well the skin is able to protect itself from the sun; skin’s innate anti-oxidant protection; and a person’s predisposition to sensitivity and inflammatory issues,” she explains.

“This information empowers people to make better skincare choices that go beyond what they think their skin type is. In a clinic environment it also allows us to be much more prescriptive in treating skin concerns. For example, we can assess whether the root of hyper-pigmentation is reduced anti-oxidant activity, inflammation or an individual’s increased vulnerability to the sun.”

Our ability to acquire knowledge has never been greater, but nor has the gulf between what we know and what we can do about it. “We might be capable of measuring DNA, but we cannot yet act on that genetic information in order to make convincing changes – the medical community isn’t even close to achieving this,” says Jean Michel Karam, chairman and chief executive of MEMSCAP, and founder of IOMA, a French skincare brand known for its high-tech skin analysis tools, which has had significant investment from Unilever since 2013.

“If we could act on anti-ageing genes, the skincare industry would have achieved something so extremely complex and life-changing that it is close to immortality.”

However, these tests remain of benefit. “The results still provide important motivation for my patients. They are much more likely to use sun protection if they know they have an increased susceptibility to UV damage,” says dermatologist Stefanie Williams, who utilises DNA testing in her clinic, European Dermatology London.

Dermatologists agree that genetic testing tools only serve to strengthen their clinical offering, but the majority take a cautious, albeit optimistic, approach. Dr Williams advises tempering overexcitement. “Genes are not predetermined and DNA-testing doesn’t account for the lifestyle factors that influence genes and often have the most effect,” she says.

“An individual might show a susceptibility to UV yet, having rigorously protected their skin, acquire significantly less damage than someone with more resilience, but a history of exposure during their childhood or teens.” This is because genes are not controlled by an on or off button, but a dimmer switch that can be regulated up or down.
The field of epigenetics studies the way in which we can influence and alter gene expression through factors such as lifestyle, diet and environment. “We need to understand how we can influence specific genes so they continue to work as they did in our youth,” says Mr Karam. “If we can address genes known as receiver genes, we can produce a cascade effect in order to indirectly influence others and that’s where skincare research is focused now.” 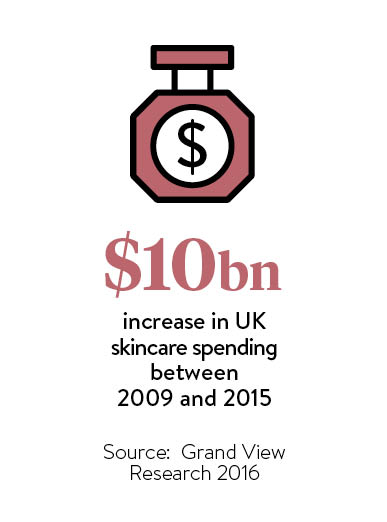 Companies such as Estée Lauder and L’Oréal have long been invested in understanding how to better influence the genes responsible for great skin. The role of lifestyle, particularly diet, has also had increasing emphasis, which has seen a shift in investment to nutritional skincare supplements. According to the Nutritional Business Journal, the global nutrition and supplement market is set to be worth $60 billion by 2021.

“Unlike the liver or kidneys, the skin is the one organ you can treat from both inside and out offering us a unique opportunity,” says Dr Harper.

While we might not be applying truly bespoke gene-creams any time soon, innovations in tests have given researchers the opportunity to study large base sizes offering a raft of interesting possibilities in the skincare arena. Olay is making huge strides working with personal genetic service 23andMe. They are comparing skin profiles against genetic markers to identify “outliers” or those that age exceptionally better than average – that friend who looks a youthful 35, but is in fact pushing 50.

“We are looking into whether these outliers – exceptional anti-agers – have a commonality: are they born with a genetic predisposition to good ageing?” says Olay principal scientist Frauke Neuser. “We can also gain a greater understanding of the nature versus nurture debate and how lifestyle factors are affecting gene expression.

“The ideal would be a future where we can identify and accurately predict an individual’s ageing patterns at 20 and preventatively treat that ageing process with tailored skincare.”

The first set of results is expected by the end of the year, but it is likely to remain an ongoing partnership. The study of genomics is an ever-evolving landscape and it will take years to truly map the terrain. 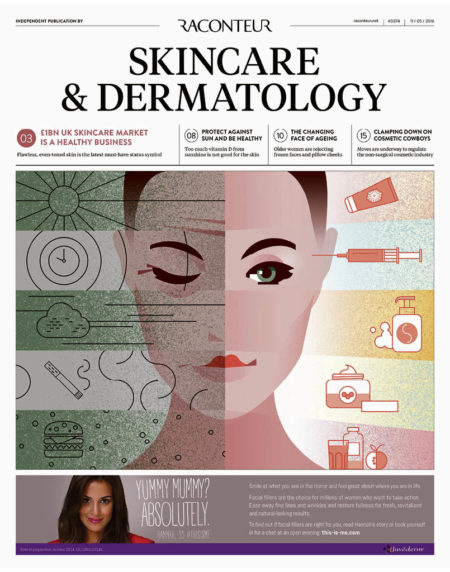