There are many lessons for children to learn about oral health, many which their parents failed to master 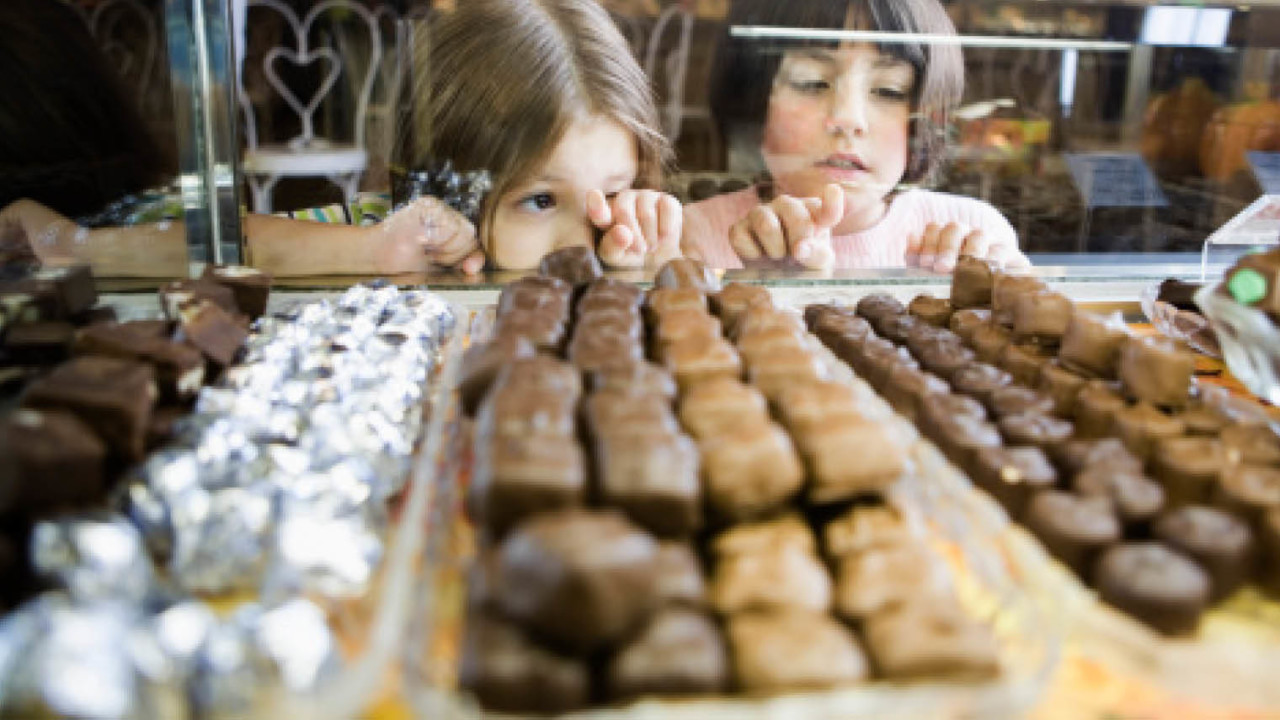 Doctors are calling for health warnings on confectionary packets to reduce the huge toll of children – 34,000 in the last two years – undergoing tooth extraction under general anaesthesia.

The proposal, at the British Medical Association’s annual representative meeting in Bournemouth, highlights increasing concern about reports that half of eight year olds have visible signs of dental decay, a third of children begin school with visible signs of decay and tooth extractions in the under-fours are up by 24 per cent in the last decade to more than 9,000 a year. Rotten teeth are the single biggest reason for children needing general anaesthesia.

Who is to blame?

The food and drink industry? Government? Parents? Changing eating patterns? Schools? The answer is all these and more besides, according to dentist Dr Nigel Carter, chief executive of the Oral Health Foundation.

Tooth decay occurs when sugar reacts with bacteria in plaque. This forms the acid that attacks the teeth and destroys the enamel. The National Diet and Nutrition Survey reported last year that children aged four to ten were consuming twice as much sugar as recommended and teenagers three times as much.

Dr Carter says: “Astonishingly, five year olds eat their weight of sugar in a year. And yet the government continues to ignore the crisis and put the wellbeing of millions at risk by bowing to pressure from the food and drink industry.”

We have been brought up to eat three square meals a day, but a BBC Good Food poll found that nine out of ten people had abandoned that advice and resorted to snacking.

Snacking up to seven times a day is not unusual. Dr Carter says: “Snacking is not good for teeth because it takes between 40 and 60 minutes for saliva to restore the acid balance in our mouths after we have eaten sugary foods and drinks – and most meals contain sugar. So the mouths of seven-times-a-day snackers take a real battering.” Child snacks often come with sugary drinks such as fruit juice and cans of Coke, which Dr Carter warns may contain 12 spoonfuls of sugar. 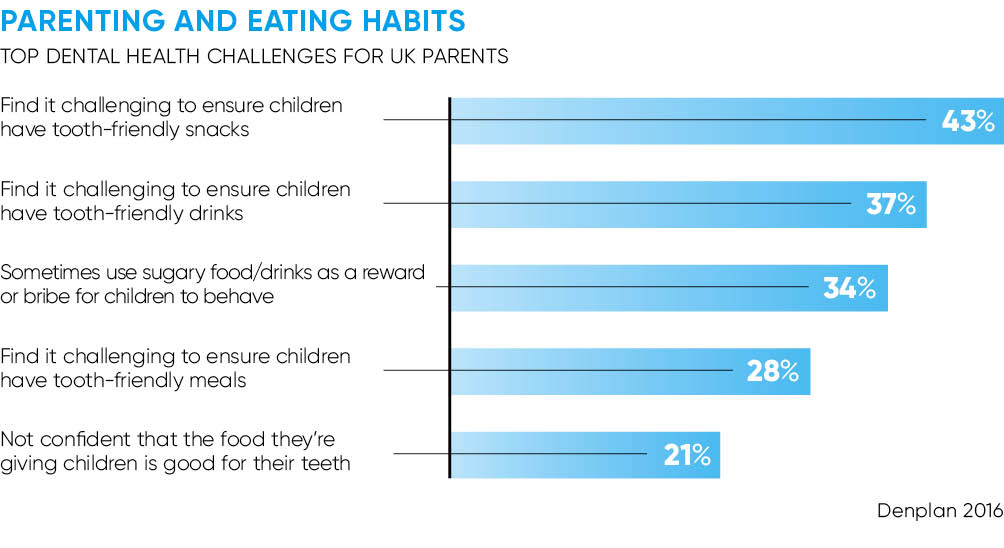 The Oral Health Foundation is calling upon England to follow the example of Scotland where the Childsmile programme offers young children free toothbrushes, toothpaste, two fluoride varnish applications a year and free daily, supervised toothbrushing within nurseries and schools. Childsmile is reported to be saving almost £5 million a year in treatment costs such as extractions, fillings and general anaesthesia.

Dr Carter says: “The cost of Childsmile in Scotland was recouped within five years. Wales is now rolling out a similar scheme. There are a few isolated examples of good practice in cities like Hull, Leicester and Manchester, but English health authorities have shown reluctance to invest in Childsmile despite clear evidence about the overwhelming benefits. It’s very disappointing and shocking.”

A survey by the Oral Health Foundation in 2016 estimated that almost four million under-14s in the UK are at risk from serious dental problems because of inadequate toothbrushing supervision.

More than one in three of the parents (37 per cent) said they stopped supervising their children’s brushing before the age of seven. NHS guidelines advise parental supervision up until at least the age of seven. One eminent expert recently went a step further. Nigel Hunt, of the Royal College of Surgeons, advised parents to brush children’s teeth, or at least supervise cleaning, until their permanent teeth are in place, at about the ages of 11 or 12.

This presupposes that parents know how to clean their own teeth properly, but many fail this test. Dr Carter says: “It’s the case of the blind leading the blind. Most people spend about 45 seconds cleaning their teeth.” Recommended cleaning time is two minutes, twice a day, including last thing at night.

Stopping children from becoming overweight by restricting sugar consumption could have a major knock-on effect on dental health, but Dr Carter described the government’s Childhood Obesity Strategy (COS) as “an absolute disaster which will lead to another generation of children with unnecessary oral health problems”.

He is not alone. The British Medical Association accused the government of “rowing back on promises”, while TV chef Jamie Oliver complained that proposals for food companies to reduce sugar levels in products were voluntary not mandatory.

The COS report says: “The food and drinks industry will be challenged to reduce overall sugar across a range of products that contribute to children’s sugar intakes by at least 20 per cent by 2020.”

But Dr Carter says that an advertising ban would not prevent retailers from positioning unhealthy food at child-high level. Does this point to a future where it may assume a kind of “top-shelf” status, like for soft-porn magazines, beyond the reach of tiny hands?

EIGHT MYTHS YOU NEED TO KNOW ABOUT

01 BABY OR MILK TEETH DON’T MATTER Yes, they do. They need cleaning. They have thinner and weaker enamel than permanent teeth, and are more vulnerable to bacteria that metabolise sugar and cause decay; severe decay can cause abscesses. Baby teeth maintain spacing, enabling later teeth to grow in the right position. 02 CHILDREN SHOULD GO TO THE DENTIST BY THEIR FIRST BIRTHDAY Wrong. The right time is when their first milk teeth appear, usually around six months, but sometimes earlier or later. Early dental visits reduce the risk of decay and of children developing dental phobia – fear of the dentist. 03 SPECIAL CHILDREN’S TOOTHPASTE IS BEST Not necessarily, according to NHS Choices. It warns that some brands do not contain enough fluoride to prevent tooth decay. Start brushing with a fluoride toothpaste as soon as your child’s first milk teeth emerge. 04 MANUAL TOOTHBRUSHES ARE AS GOOD AS ELECTRIC ONES Not true, say children’s dentists. Electric toothbrushes can remove up to twice as much plaque as manual ones and have smaller heads, making it easier to clean uneven teeth. Electric models with two-minute timers may stop children skimping on brushing. 05 BRUSHING TEETH AFTER EATING This is the last thing you should do.  Acid in food demineralises teeth for 40 minutes to an hour after eating, softening the protective enamel. Brushing during this time may wear away the enamel. Dentists recommend brushing twice a day, including before bed. 06 DRIED FRUIT IS BETTER THAN SWEETS AND CHOCOLATE Many parents believe dried fruit is a healthier option than sweets, but it is just as damaging. Its sticky sugar sits on teeth for longer than other foods and threatens enamel. Safer snacks, such as cheese, toast and breadsticks, are washed away quickly. 07 FRUIT JUICE IS HEALTHY No, it isn’t. Fruit juice is a good source of nutrients, but the negative effects of high concentrations of sugar outweigh the benefits. Mushing up fruit also removes healthy fibre. While eating whole fruit may reduce the risk of diabetes, research suggests drinking fruit juice may increase it. 08 RINSING TOOTHPASTE AWAY AFTER BRUSHING No, you shouldn’t. Teach children to spit not rinse. Rinsing with water washes away the protective fluoride left behind by brushing. Nearly two thirds of the sample in an Oral Health Foundation spit-rinse poll were rinsers.