Harnessing the power of the body’s immune system to fight cancer is one of the most exciting breakthroughs in treatment, but there remains much to be done and understood 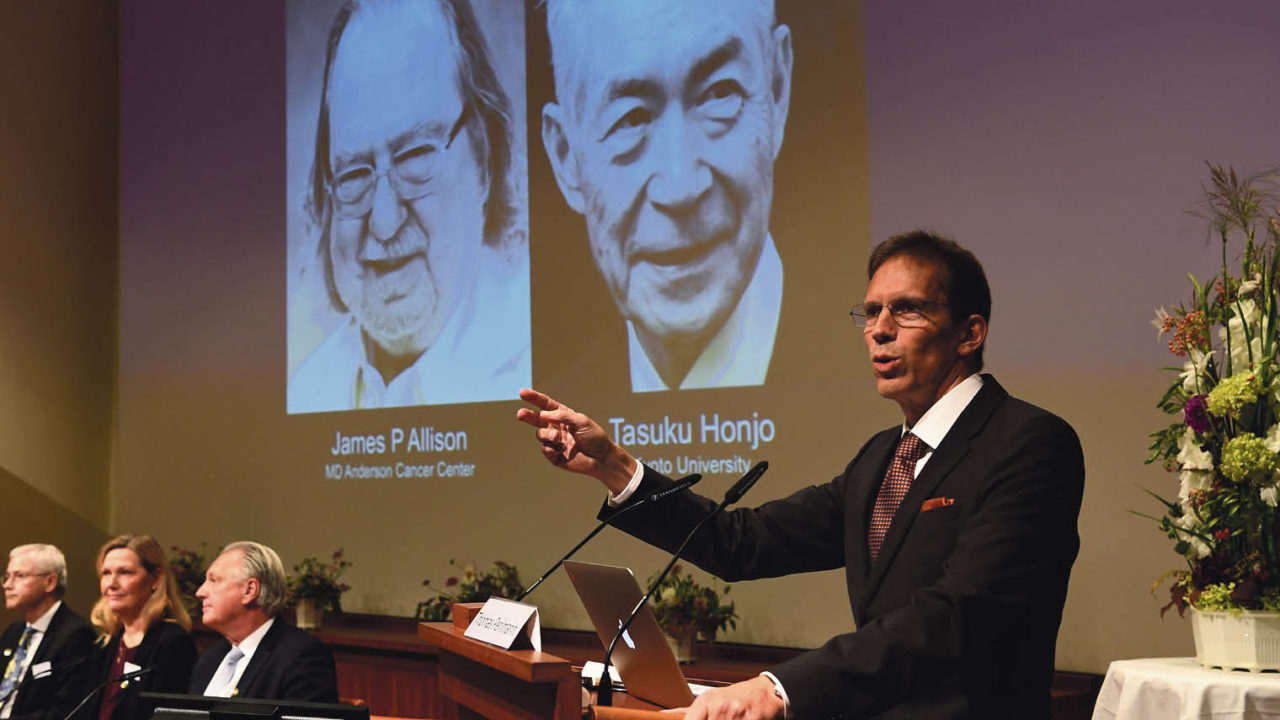 When James P. Allison of the United States and Tasuku Honjo from Japan won this year’s Nobel prize for medicine, the Nobel committee hailed their work as “an entirely new principle for cancer therapy”, which has fundamentally changed the outcome for some advanced cancer patients.

The two Nobel laureates’ research led to the development of a form of immunotherapy called checkpoint inhibitors. These release the brakes on the immune system, blocking proteins that stop it from attacking cancer cells.

They act on T-cells, white blood cells that can identify and kill cancerous cells; a single T-cell can kill thousands of cancer cells. T-cells have proteins that turn on an immune response and other proteins that turn them off. These are called checkpoints.

What do checkpoint inhibitors do?

Cancer Research UK explains: “Some checkpoint proteins help T-cells to become active; for example, when an infection is present. But if T-cells are active for too long or react to things they shouldn’t, they can start to destroy healthy cells and tissues. So other checkpoints help to tell T-cells to switch off.

Also known as monoclonal antibodies, checkpoint inhibitors stop the cancer cell proteins from pushing the stop button. This switches the immune system back on, enabling T-cells to resume their search-and-destroy mission.

The Nobel laureates succeeded where others had failed by working out the interaction between cells and fine-tuning the immune system.

What Allison and Honjo’s work has helped to do

The bearded, jovial, 70-year-old, harmonica-playing Dr Allison, chair of immunology at the University of Texas, developed an antibody to block a checkpoint protein called CTLA-4. This led to the first of the checkpoint inhibitors. Licensed in the US in 2011, ipilimumab became the first treatment to extend survival of patients with late-stage melanoma skin cancer.

Follow up studies showed that 20 per cent of patients lived for at least three years, but many survived for ten years or more – a spectacular result.

Dr Allison says: “I never dreamt my research would take the direction it has. It’s a great emotional privilege to meet cancer patients who’ve been successfully treated with immune checkpoint blockade. They are living proof of the power of basic science, of following our urge to learn and understand how things work.“

The Nobel laureates’ work also helped to establish treatment for lung, kidney, bladder, gastric, liver, cervical, colorectal, head and neck cancers, and Hodgkin’s lymphoma, a cancer in the lymphatic system, which helps to drain fluid and waste products from the body. 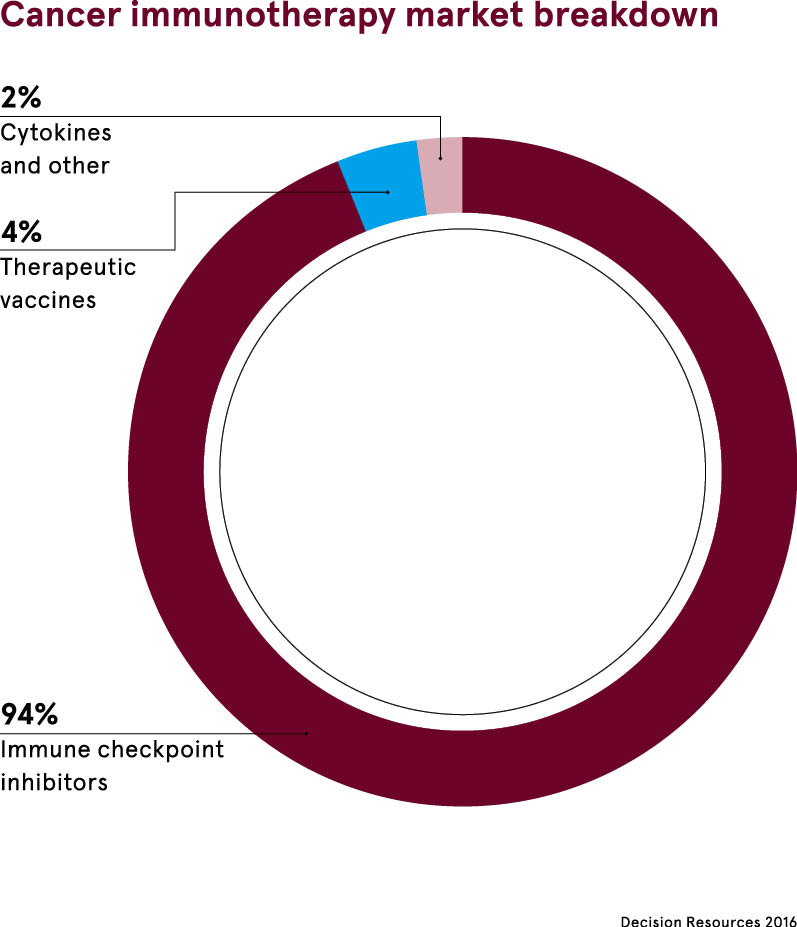 Checkpoint inhibitors do not work in every case

But while between 20 and 30 per cent of cancer patients respond extremely well to checkpoint inhibitors, most do not. Drug companies have been trying to increase success rates with two-drug cocktails. Worryingly, some of these combinations are said to be based more on guesswork and crossed fingers than good science.

Dr Allison explains: “One challenge is that the clinical success has outrun our scientific knowledge of how these drugs work and how they might best be combined with other therapies to improve treatment and reduce unwanted side effects.”

Side effects can be severe because checkpoint inhibitors boost all immune cells, not just the ones that target cancer. Overactive T-cells can generate nausea, skin problems, appetite loss, diarrhoea, breathlessness and a dry cough. Checkpoint inhibitors can also disrupt the liver, kidneys and hormone-making glands such as the thyroid.

Unfortunately, combination therapy, such as ipilimumab and another checkpoint inhibitor nivolumab, has been shown to exacerbate side effects in patients with advanced melanoma.

One combination that has been conclusively proven to work involves twinning a checkpoint inhibitor with chemotherapy, a mainstay of cancer treatment for more than 70 years. But chemotherapy is also associated with debilitating side effects such as hair loss and vomiting.

All this explains why more than 1,500 treatment trials are underway in what is, in essence, one of the biggest ever games of pharmaceutical roulette. The potential financial rewards for Big Pharma are breathtaking as a winning treatment could generate, in theory, hundreds of millions of dollars of profit. But according to one recent estimate, widespread use of immunotherapy agents in the US alone could cost $174 billion.

Costs in the UK are substantially less than across the Atlantic. For example, pembrolizumab, which can extend the life of some patients with lung cancer for a year or more, has a full list price of £84,000 a year, but the manufacturers Merck, Sharp and Dohme have given the NHS a confidential discounted price. This followed a trial in which it was shown to extend life by 16 months more than standard chemotherapy. About 1,800 UK patients a year are eligible for treatment.

The more successful the new treatments become, the harder it will be to juggle demand with resources. Deloitte’s, specialists in tax and risk management, recently reported that it costs the world’s top bio-pharma companies more than $2 billion to bring a drug to market.

A cancer therapy known as CAR T-cell is generating immense scientific interest. T-cells, the workhorse of the immune system, are removed from the patient’s blood and genetically engineered to produce receptors known as CARS. These enable T-cells to recognise and attach to cancer cells The harvested cells are expanded into hundreds of millions of cells to create what is, in essence, a living drug. These are infused into the patient in the hope that they will further multiply and kill cancer cells. CAR T-cell therapy has achieved spectacular results in treatment of acute lymphoblastic leukaemia, the most common form of childhood leukaemia. Dr Martin Pule, senior lecturer in haematology at University of College London Cancer Institute, says: “It’s amazing that 95 per cent or more of these children with refractory or relapsed ALL go into remission and about two-thirds stay in complete remission.” Refractory patients do not respond to initial therapy and relapsed ALL is the leading cause of death from childhood cancer. But CAR T-cell therapy doesn’t always work if, for example, previous chemotherapy has damaged a patient’s T-cells. Another problem looms. The first CAR T-cell therapy, tisagenlecleucel (Kymriah), for children and young adults with the most common form of ALL, was recently priced at $475,000 for a one-time treatment. The vast majority of patients treated so far have been in clinical trials financed by drug companies.