Technology companies are getting serious about the baby-making business. In the last few years smart devices and apps, from bracelets that tell you if you are ovulating, to at-home hormone testing kits, have radically changed our understanding and approach to fertility. Investors are also paying attention, with the global fertility services market predicted to grow to $21 billion by 2020.

Women now have access to a wealth of data to help them self-regulate, monitor and enhance the chance of pregnancy, as well as smart devices that offer a hormone-free contraception alternative. As these apps and products continue to play an increasingly major role in reproductive health, it raises the question: what happens when technology gives fertility a reboot?

“There has been little innovation within this space since the creation of the contraceptive pill,” says Ida Tin, chief executive of the period and ovulation tracker Clue. “Now, taboos around fertility and menstruation are disappearing, and as they do, women want to know more about their bodies and the unique patterns of their menstrual cycle.”

The Berlin-based company was one of the early period trackers that gave fertility an injection from the startup sector. By the end of 2015, Clue had 2.5 million users in 180 countries and had raised €10 million. Competitors in the market are Kindara, which launched in 2012 as a fertility tracking app, and Glow, launched by PayPal co-founder Max Levchin. The most basic functionality of these apps is to tell women when their periods are due, but some can also be used to prevent or plan pregnancy.

The fertility awareness method (FAM) is a misunderstood form of contraception. It relies on the physiological symptoms, such as changes in body temperature and cervical fluid, which reveal where a woman is in her cycle to determine her six-day fertility window. By monitoring and tracking these signs, a woman is able to pinpoint if she is fertile.

Often confused with the rhythm method, the crudest and most unreliable way to use FAM, many women do not believe FAM works. And while it’s rarely, if ever, offered as an option by a GP, according to the NHS website: “If natural family planning is followed correctly, it can be up to 99 per cent effective.” By comparison, the NHS says the pill and IUD (intrauterine device or coil) are both more than 99 per cent effective.

To be able to achieve that level of effectiveness with FAM, however, an app alone will not be enough. Many of the period tracker apps, including Clue, state they cannot be used as contraception alone. That’s where wearables and connected devices have come in.

“We’re all really comfortable with technology these days, especially to do with tracking health, calories, diet, exercise, sleep, heart rate,” says Holly Grigg-Spall, author of Sweetening the Pill. “And so we’re more able to understand the concept of monitoring, data and algorithms, and that it can help you understand what is going on with your body.”

Ms Grigg-Spall also works for Daysy, a fertility calculator. Daysy is a highly sensitive thermometer that reads a woman’s basal body temperature (the lowest body temperature attained during sleep) and cross-references the data with its on-board computer to tell where she is in her cycle. It can be used to both plan and prevent pregnancy. Its effectiveness rate for avoiding pregnancy is 99.4 per cent.

Daysy launched in 2014, but the company behind it has been offering a similar product, Lady-Comp, for more than 25 years. It’s only been in the last few years that similar products have started to come on the market, including Wink, the custom thermometer Kindara offers to work in conjunction with its app, and Natural Cycles.

The trend of more companies offering technology-driven contraception dovetails with women’s increasing dissatisfaction with existing hormonal options. Two recent studies from Danish researchers linked the pill to an increased risk of breast cancer and also depression, prompting many women to rethink their options.

“There wasn’t really a situation where women who didn’t want to use synthetic hormones at all had something they could go to,” says Ms Grigg-Spall. “People are now happy to and want to learn more about fertility awareness.”

FAM monitors and apps can also be used in planning pregnancy, as they enable women to track when they are likely to be ovulating. There are now also plenty of products specifically geared towards women trying to conceive, such as Ava, a bracelet that tracks when a woman is ovulating, and OvuSense, a real-time fertility monitor.

There are also technology options available for women who are struggling to conceive. At-home hormone testing kits made by companies including Modern Fertility and LetsGetChecked offer a way for women to check their hormone levels. These kits are not without their drawbacks; perhaps one of the fundamental limitations is that if there is an underlying fertility issue, couples hoping to become parents still need to turn to medical help.

An app attempting to help ease the emotional process of undergoing IVF treatment is Salve, an early-stage company whose mission is to make a difficult process easier for both the patient and medical provider. The app works by syncing with the clinic to provide the patient with personalised treatment information. It has all the data regarding the patient’s care, acting as a medication manager, appointment reminder and also resource centre.

“It’s about removing someone’s stress and anxiety around the practice,” says Charlie Kenny, Salve’s chief executive and co-founder. “That could be all of the drugs they have to take, all their appointments they have upcoming, with supporting information, so this will be videos, texts, images, to ensure they understand everything.”

The Manchester Fertility Clinic was one of the first to use Salve and says they have seen an improvement in their internal processes as a result. Jonathan Koslover, the clinic’s managing director, says one of the biggest advantages for clinics to use an app such as Salve is an improvement in the level of patient service the clinic is able to offer.

It’s about improving treatment and therefore chances of success, which is very important because ultimately it’s about getting pregnant

“We’re using it to educate patients about what their treatment will involve,” says Mr Koslover. “This is particularly important in fertility because people are nervous. It’s an intrusive and emotional treatment.”

He emphasises that these apps will never replace the doctors’ work. “It’s a very personal treatment, so you still have to have that nurse or doctor contact,” he says. “We still make sure that we’re talking with patients. You can’t do it all electronically.”

For clinics like Mr Koslover’s, technology will continue to improve fertility services by offering supplementary options that ultimately enhance a couple’s chance of success. He sees a future where ultrasound scanners will use artificial intelligence to help determine patients’ treatment. “It’s about improving treatment and therefore chances of success, which is very important because ultimately it’s about getting pregnant,” Mr Koslover concludes. 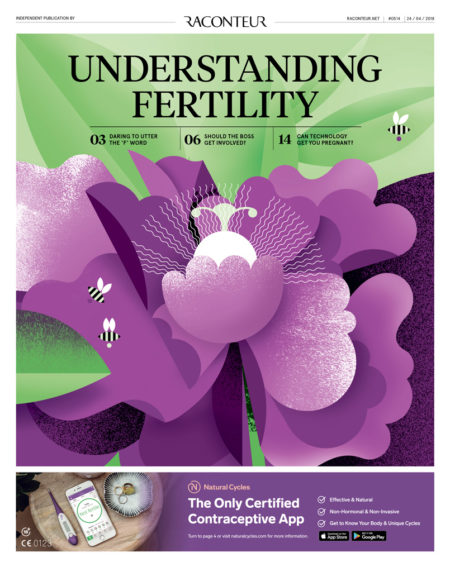