Since 1950, the autonomous region of Tibet has been a source of international contention, stemming from a Chinese-led military assault that coerced Tibet’s leaders into signing a treaty that allowed full military occupation. Nine years later a full-scale uprising against the Chinese led to thousands of Tibetan deaths – a conflict that the Chinese government has never acknowledged. The Dalai Lama, the spiritual leader of Tibetan Buddhism, fled the country; more than 80,000 Tibetans followed his lead.

Today, access to Tibet is still restricted for journalists, and the Beijing government heavily controls the message, presenting a public image of a harmonious, peaceful region that is developing as a tourist destination. The red flag waves from every corner, photos of Premier Xi Jinping tower over the main square, New Balance outlets and fake Apple stores have sprung up in shopping arcades. The ethnic mix of the population has changed profoundly, as Han Chinese follow the government’s infrastructure development to set up businesses. Protests against the occupation continue, however, with self-immolations by monks continuing into the 21st century. 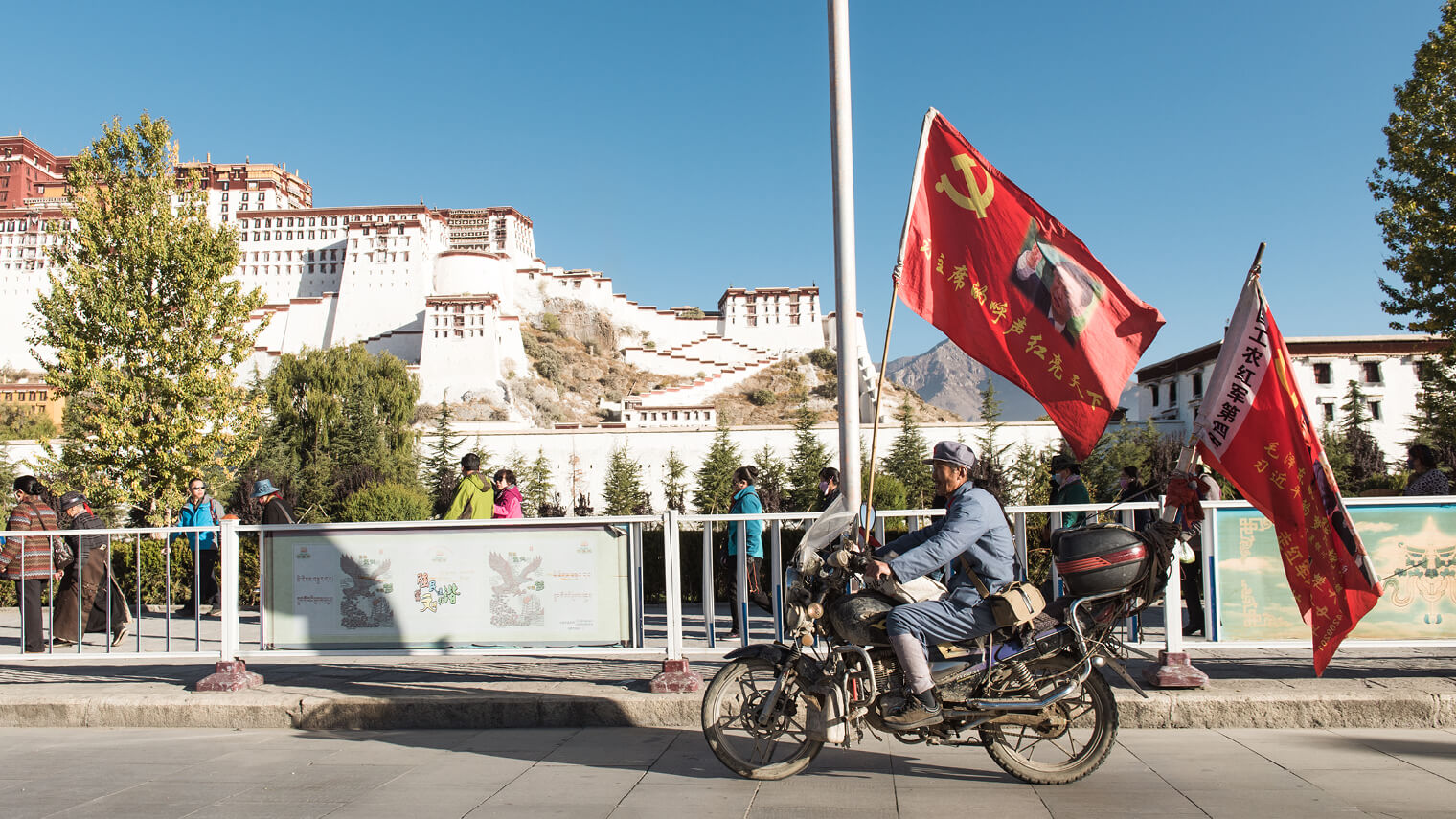 A Chinese activist with a blaring radio rides by the Potala Palace, the home of the now-exiled Dalai Lama. A place of pilgrimage for many Tibetans, the palace is now a shell of its former self, serving no greater purpose than as a museum to the lamas. 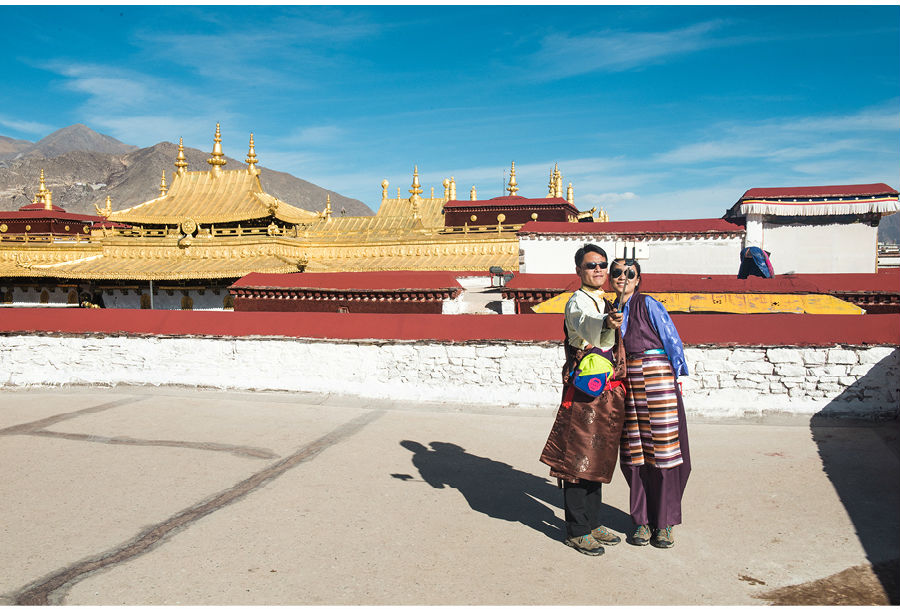 The Chinese government in mainland China has aggressively marketed Tibet as a tourist region to Han Chinese, who have been accused of the Disneyfication of Tibet, turning once-sacred spots of worship and meditation into a theme park of selfie sticks and shop-bought scarves and robes. 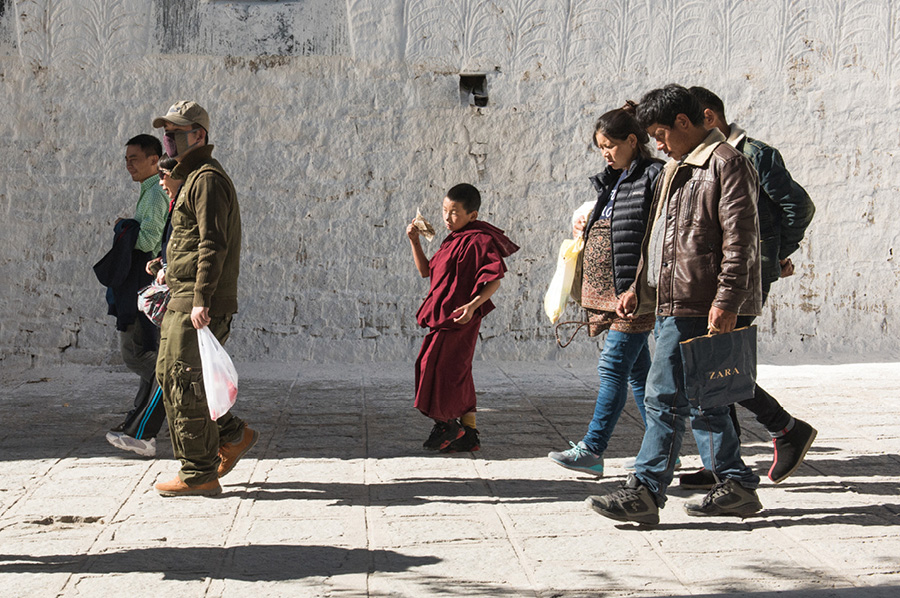 A young monk fans himself with cash left by pilgrims as offerings to the monks in the Drepung Monastery. It’s not unusual to see monks wearing Adidas and New Balance trainers, while walking along glued to their iPhones. 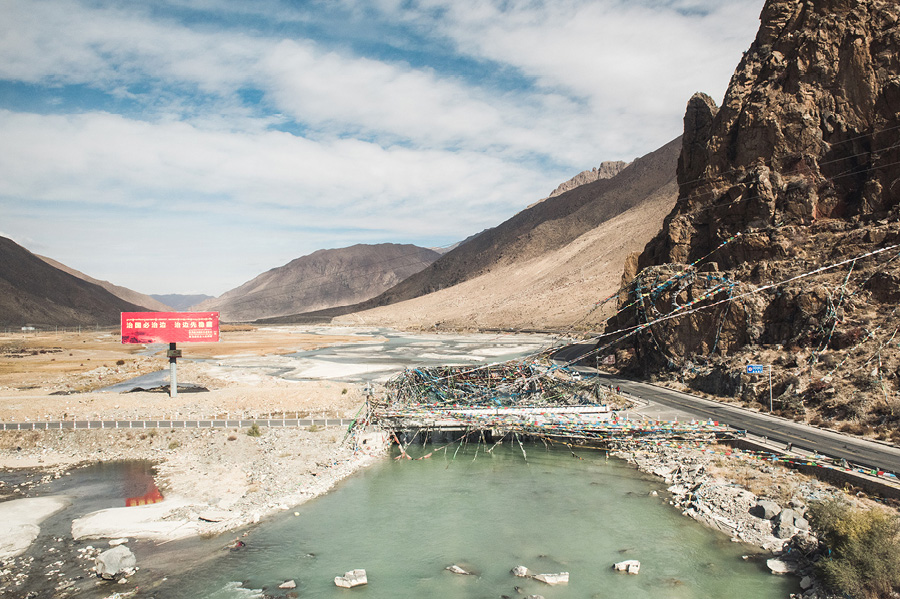 The view from the Qinghai Railway which runs from Xining to Lhasa: an engineering feat of excellence, the building of the route into Lhasa was offered even greater access for Han Chinese tourists and entrepreneurs to reach Lhasa. Even today, it is unusual to see Tibetans on board, most of whom are forbidden by the Chinese government from travelling in and out of Tibet. 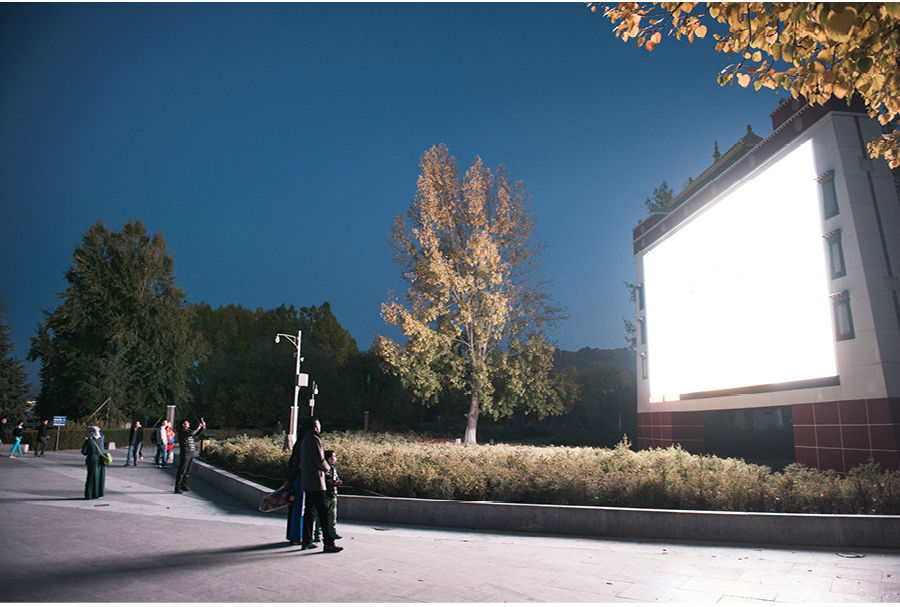 A giant screen broadcasts Chinese images of Buddhism to passers-by. 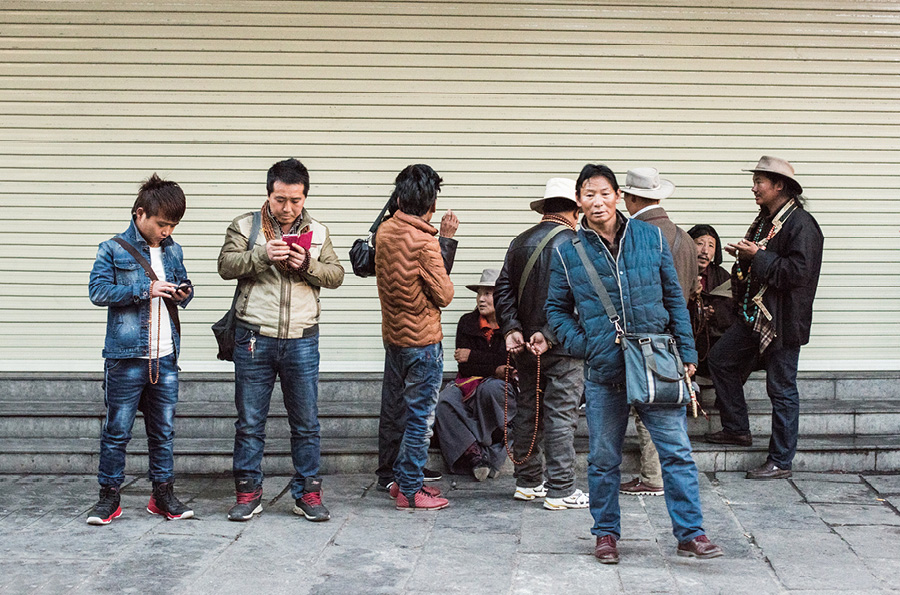 Tibetans sell jewellery in Barkhor Square by the Jokhang Temple – the most sacred temple to Tibetans. 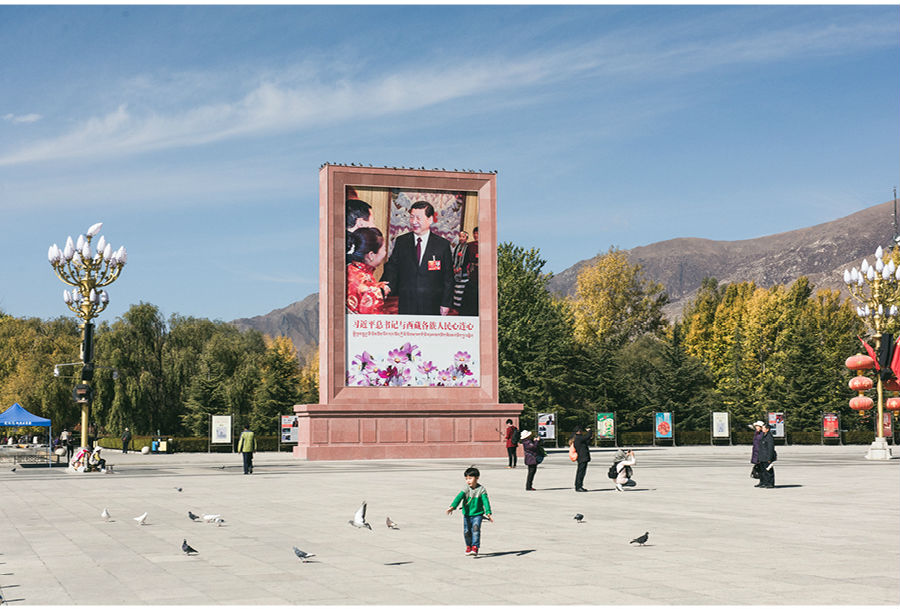 A billboard of Chinese Premier Xi Jinping towers over the main square in front of the Potala Palace, a favourite spot for pilgrims. 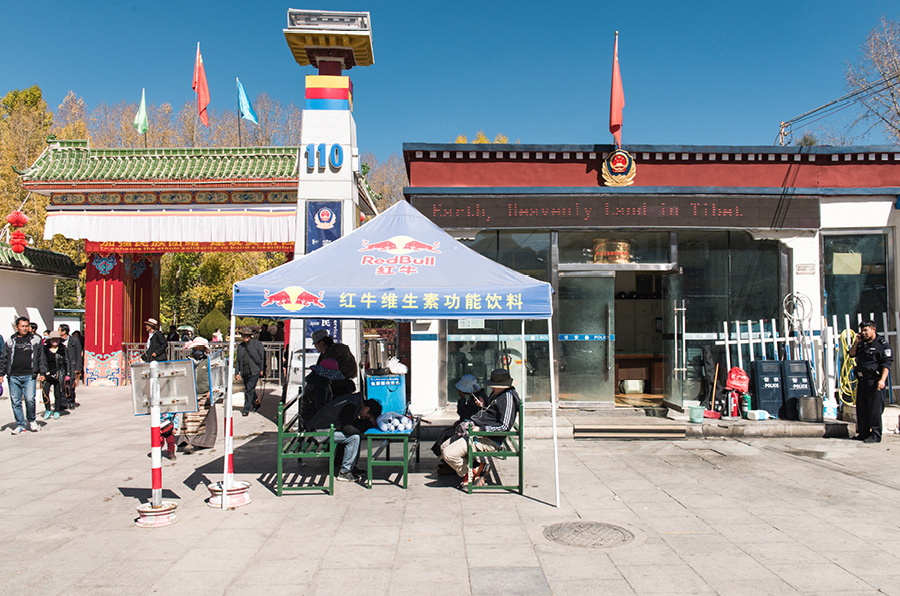 The police station at the foot of the Potala Palace is sponsored by Red Bull. To “protect” Tibetans, and to keep their city safe, the police are on site to move in swiftly in case of self-immolations and riots. Military trucks filled with armed troops are a constant reminder of potential unrest. 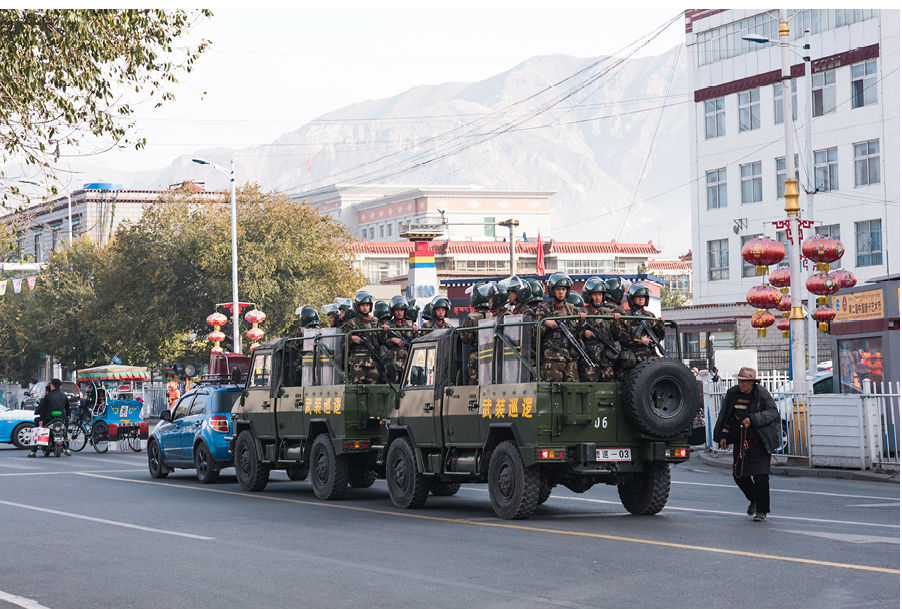 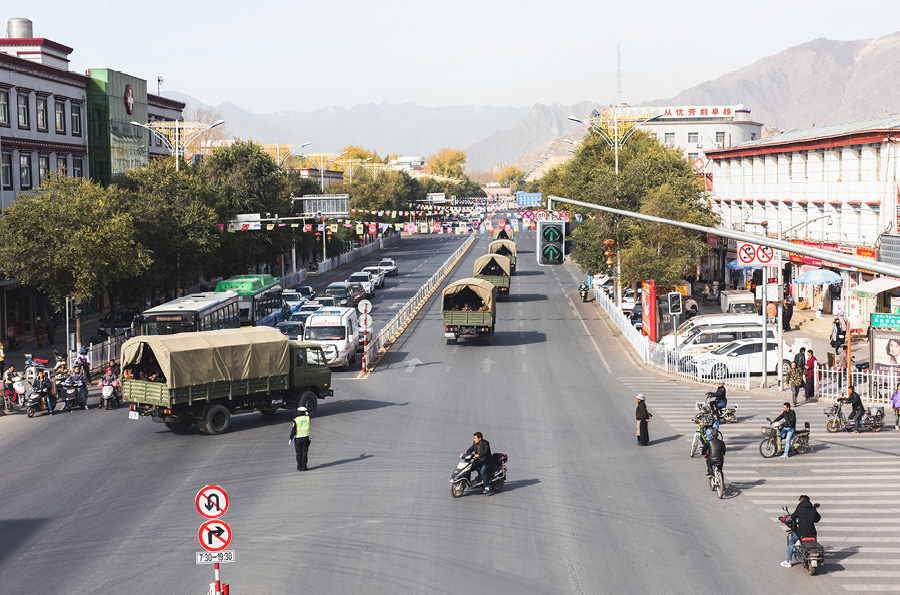