With less than 1.2 per cent of all water on Earth available for humans to use, the world faces a 40 per cent shortfall in available global water supply by 2030, according to latest United Nations data.

And that is of particular concern to business. A problem exacerbated by global changes to our climate, a sustainable supply of good-quality water can no longer be relied on by companies looking to grow their operations in many parts of the world – from utilities and fashion brands with plants in South-East Asia, to breweries and mining companies in South Africa.

The World Bank predicts global GDP growth rates will fall 6 per cent by the middle of the century as a result of increased competition for water. And this would result in costs of $2.5 billion for companies at the mercy of increased water scarcity.

“If climate change is the shark, then water is its teeth and companies are learning this the hard way,” says Morgan Gillespy, head of water at CDP, an organisation that encourages companies to disclose data to incentivise them to take action to address their environmental impacts.

South African mining company Gold Fields was forced to invest $92 million in a new diesel-fired power plant due to the declining availability of electricity being generated by Ghana’s fleet of hydropower plants, for example. “These sorts of figures bring the financial risk that companies face from water issues sharply into focus,” says Ms Gillespy. 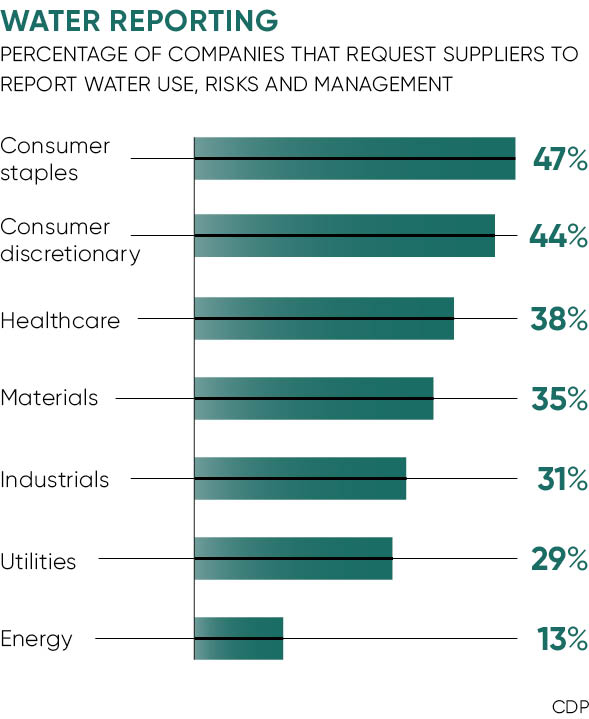 Despite more than half of the 4,000 water-related risks identified by companies being likely to materialise within the next six years, CDP believes companies have not made clear progress on improving how they manage their water use, particularly outside of their own sphere of influence further along their supply chains.

If climate change is the shark, then water is its teeth and companies are learning this the hard way

That will no doubt encourage more companies to join the handful of businesses already starting to take their water risks seriously. For example, US tools business Black & Decker engages with suppliers in three Chinese river basins to protect against the risk of supply chain disruption and is working with 36 of its top 50 suppliers in the region to carry out audits to make sure effective water stewardship practices are in place.

IT business HP collects environmental data from 95 per cent of its suppliers. More than 70 per cent of these report against water metrics, with 71 per cent using targets to reduce their water use.

Consumer goods giant Unilever has set a goal to engage with suppliers to help them reduce their water impacts. In 2015, Unilever asked 179 of its key suppliers to complete a questionnaire on water use and almost 90 per cent did so.

More needs to be done

However, examples of best practice remain few and far between. According to sustainability non-profit organisation Ceres, 60 per cent of food companies are failing to address water issues in their agricultural supply chains. Just 16 per cent of companies have policies in place to address water issues, with only four companies – Coca-Cola, General Mills, Kellogg and Unilever – having time-bound goals to source the majority of their agricultural inputs from farmers using responsible water practices.

“Farmers are facing increasing pressure to not just reduce costs and increase yields in a competitive environment but to comply with many different surveys and codes from many different suppliers,” says Ceres water programme manager Eliza Roberts. “Food-sector companies can play an important role in supporting farmers as they improve their water stewardship practices by providing financial incentives such as favourable financing terms, interest-free loans, paying a premium to producers or offering financial guarantees to farmers trying new farming techniques.”

The recently launched AgWater Challenge, a new initiative that seeks to encourage better water stewardship among the world’s biggest food and drink companies, offers a good example of what might be possible if companies are willing to work together. Seven global food companies, with collective revenues of some $123 billion a year, and including Diageo and General Mills, have committed to work with thousands of farmers in their supply chains to reduce water use, particularly in highly stressed watersheds across India, Mexico and California.

But advances in best practice are piecemeal. However, as a handful of players are proving, managing water risks along the supply chain is achievable in most parts of the world. Yet a large-scale shift in ways of working across the agricultural sector will demand collaborative innovation between all players. 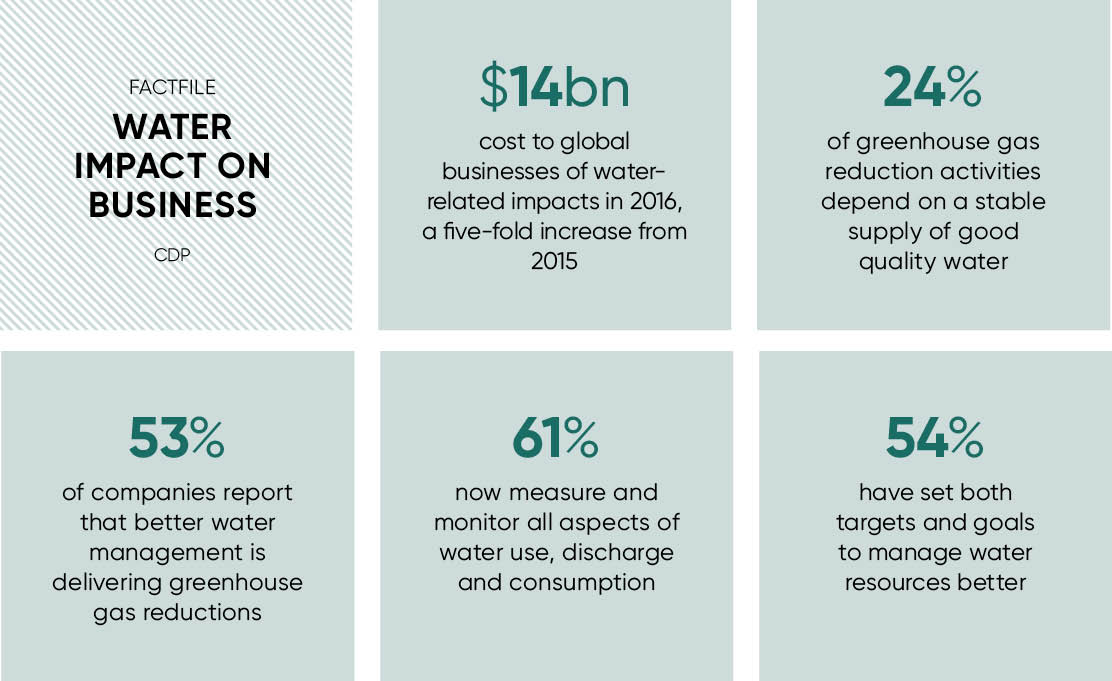