Although the UK rail network is the fastest-growing in Europe in terms of passenger numbers, the system that transports these passengers has failed to keep pace with this growth – like a glacier, change is happening but so slowly that it can be hard to see.

“We have a lot of pretty aged infrastructure, so lots of investment is needed to improve the network,” says David Moore, a rail expert and partner at law firm Clyde & Co.

Although there is lots of criticism, the industry carries more people on much better rolling stock and is much safer than it used to be

According to the government, there are 20 per cent more services today than 15 years ago, but they are running on essentially the same network.

“Although there is lots of criticism, the industry is in pretty good shape,” Mr Moore adds. “It carries more people on much better rolling stock and is much safer than it used to be.”

Under pressure to improve

“Understandably, this puts significant strain on our network which makes capacity-increasing measures essential. Our rail system, the first in the world, has changed little since the Victorian era,” says Mr Gordon.

As a result, he says, it is in urgent need of additional capacity. “Fortunately, we are seeing significant levels of investment into infrastructure improvements and new rolling stock across the rail network.”

The biggest project currently under way is Crossrail, which is improving links across London, with Crossrail 2 under consultation at the moment. Crossrail 1 will link stations from Reading to Heathrow, central London all the way out to Canary Wharf and Brentwood in the east of London. Crossrail 2 will improve links from Surrey and Hertfordshire into London.

“Huge projects such as HS2 and Crossrail are really important, but there are other big upgrades going on as well,” says Richard Robinson, Aecom’s chief executive of civil infrastructure in Europe, the Middle East and Africa.

The government has identified a number of key upgrade projects including:

Delays on and off the track

But, says Mr Moore: “The whole process takes far too long. As the Crossrail website says ‘after 35 years of planning and development, Crossrail finally broke ground on May 15, 2009’.” The first trains are due to use the new line in 2017.

Part of the problem is that “infrastructure can take many years to be implemented, while the parliamentary cycle is five years”, he adds. “Elections get in the way of infrastructure.”

Another issue, particularly when it comes to upgrading existing lines is that, because the network is so intensively used, any work must happen without disrupting services. Mr Robinson says: “It’s not unlike trying to fix the wings on a plane while it is flying.”

However, upgrading the network is vital for the UK’s future job creation and economic growth, he adds. In a survey for Aecom and the CBI, more than nine out of ten respondents said infrastructure is essential for their investment decisions. “The link between good transport connections and economic activity is undeniable,” says Mr Robinson.

Industry leaders say new intercity capacity must be high-speed rail, in part because the UK lags far behind its European neighbours in high-speed capacity – we have just 100km of track, while countries such as France and Germany have thousands of kilometres – and partly because a new high-speed network will ease congestion both on existing rail networks and on the nation’s roads.

“A new line dedicated to long-distance train journeys would mean that more paths are available on the existing lines for commuter travel and for rail freight, easing congestion on our overcrowded road network in the process,” says Stuart Andrew, co-chair of the All-Party Parliamentary Group on High-Speed Rail. “Critics have argued that a new line does not need to be high speed and that the distances covered by the network are far too small for HS2 to be a valid option. However, a high-speed line will only cost 9 per cent more than a conventional line and will alleviate pressure on existing networks.”

There are other measures that can increase capacity on existing networks, says Steven Brown, director of rail at engineering consultancy Ramboll. “Advances in signalling technology mean we can take control of trains from thousands of line-side signals and consolidate them into maybe a dozen control centres that can look after the whole network. It will lead to safer, faster, more reliable journeys,” he says.

There is also scope to help improve journey times and release capacity on the network through electrification projects, such as the one being planned for the TransPennine Express route, Mr Gordon adds.

All this modernisation costs money, which is coming from a variety of sources on top of government spending. “There is a lot of investor appetite for these projects in the UK,” says Mr Robinson.

Mr Moore agrees, saying that interest is coming from domestic and foreign investors, sovereign wealth funds and governments. “But they will want to see a return on their investment,” he says. “If all the money comes from fare-payers, there will have to be some kind of government subsidy to plug the gap.”

However, Crossrail has opened up other funding streams that were initially contentious, but have proven to be very effective, says Mr Brown. These include a business rate supplement on business that will benefit from the scheme and a community infrastructure levy.

“The rail sector is in a healthier state than it was 15 to 20 years ago,” he concludes. “When I joined the industry in 2000, it was not fit for purpose. Since then we have seen massive changes.”

Elon Musk, co-founder of PayPal, made electric cars sexy with the Tesla – now he wants to do the same for trains.

In 2013, annoyed at proposals for a high-speed rail system in California that would be “both one of the most expensive per mile and one of the slowest in the world”, he outlined an alternative proposal called Hyperloop, to link cities that are less than 900 miles apart; longer than that and you need supersonic air travel, he says. 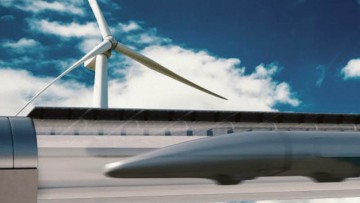 “Short of figuring out real teleportation, which would of course be awesome – someone please do this – the only option for super-fast travel is to build a tube over or under the ground that contains a special environment. This is where things get tricky,” he writes on the website of another of his companies, SpaceX.

His idea is to build a low air pressure tube mounted on pylons between cities, such as Los Angeles and San Francisco, through which pods would run at speeds of up to 700mph on a bed of air instead of rails, propelled by magnetic accelerators. It is a cross between the pneumatic tubes large offices routinely used to send messages and a maglev train, and could cut the LA-San Francisco trip, or London to Glasgow, to half an hour.

“By building it on pylons, you can almost entirely avoid the need to buy land by following alongside the mostly very straight California Interstate 5 highway, with only minor deviations when the highway makes a sharp turn,” says Mr Musk. Although his idea would cost billions, it would be a tenth the cost of a high-speed rail line, he claims. He even says the scheme could be self-powering if solar panels were placed on top of the tube.

While Mr Musk is not developing a Hyperloop system himself, he is helping to make the scheme a reality by running a competition to design and build Hyperloop pods, which can be tested on a one-mile test track SpaceX will build near its California HQ in June 2016.