What are museums and galleries for? For preserving art from our history? For displaying art of our future? For teaching people, meeting people, inspiring people? All of the above? Whatever purpose they fulfil, their place in society is increasingly vulnerable, with a lack of government funding of the arts meaning galleries must rely on private donors and public support. So how will the galleries of the future look, and how must they develop to survive?

The largest art theft in history took place in March 1990 at Boston’s Isabella Stewart Gardner Museum. 13 works of art - worth an estimated $500 million - were stolen, leaving empty frames in their place. Today, those stolen masterpieces are being returned, albeit briefly, by the wonders of digital technology.

Galleries having been using digital technology to showcase their art for years. Household names provide virtual tours on their websites and sites like Google Arts & Culture allow you to walk the halls of some of the world’s foremost cultural institutions from the comfort of your own home.

But augmented reality goes one step further, allowing visitors to experience the enhanced gallery - replacing what has been lost and showcasing the work of daring new artists, experimenting with this new artistic frontier.

The first exhibition by MoMAR, an unauthorised gallery concept bent on democratising exhibition spaces, leverages augmented reality to layer eight new artists’ work on top of existing pieces in New York’s Museum of Modern Art. The exhibition, called “Hello, we’re from the internet”, can be viewed through the MoMAR app in the museum’s fifth floor Jackson Pollock gallery, where the renowned abstract expressionist’s masterpieces are remixed and replaced by bold new interpretations.

The idea of “democratising art” calls another question to mind: what do galleries owe their public? Many art institutions have committed to working towards the UN’s Sustainable Development Goals (SDGs), published in 2015, which cover issues from poverty and hunger to gender equality and climate change. Although unlikely to thwart world hunger, galleries do have the power to support the tenth SDG on the list: “reducing inequalities”, using their unique platform and position to make art accessible for all.

Lifts and ramps for wheelchairs will be considered the bare minimum in the gallery of the future, and organisations are already making great strides in opening up the joy of art to new audiences. In February 2018, the Royal Academy of Art in London held its first ever life-drawing workshop for blind and partially-sighted visitors, and the Tate Modern holds a monthly tour where visually-impaired guests are equipped with archival gloves so they can touch and experience installations up close.

And true responsibility is about more than helping new people through the doors, it extends to the pieces you hang on the walls. In the era of #MeToo, organisations must wrangle with the ethical issues surrounding exhibiting works by known, or alleged, abusers. In Washington, the National Gallery of Art postponed its Thomas Roma exhibition, after the photographer was accused of inappropriate behaviour with several female arts students. In Boston, the Institute of Contemporary Art added signage to its Nicholas Nixon exhibition, explaining the accusations against the photographer, before taking it down early upon request of the artist himself.

Perhaps the most forward-thinking response, and the one most likely to characterise the responsible gallery of the future, came from the Pennsylvania Academy of the Fine Arts. They kept up their Chuck Close exhibition, but responded to the accusations of sexual harassment by opening a new show of female artists, called “The Art World We Want”, where visitors were invited to share their opinions by adding Post-it notes to the walls. 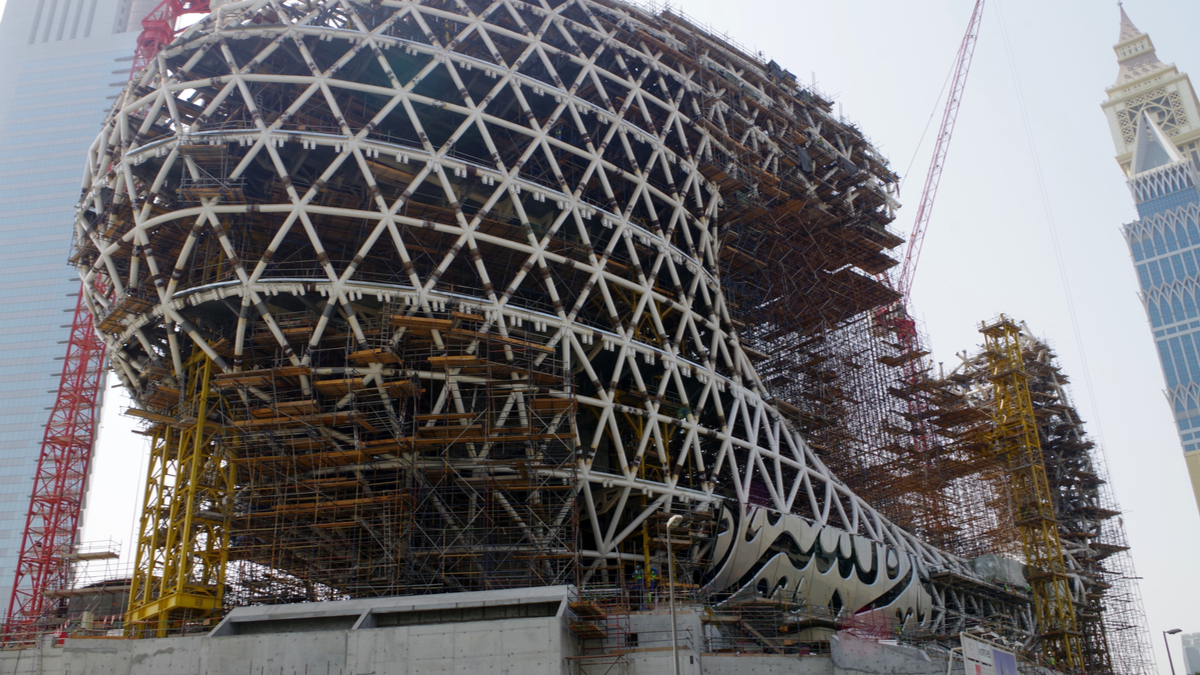 Dubai’s Museum of the Future, set to open in 2019, complete with one of the specially engineered windows, designed to look like Arabic script on the gleaming silver facade

Galleries looking to contribute to more ecologically-leaning sustainability goals can leverage the oldest artistic medium there is: architecture.

The recently-opened V&A Dundee is a sterling example of this. Projecting dramatically into the River Tay like the prow of a boat, the new museum has won plaudits for its striking design and its green outlook. The building uses geothermal energy for all its heating and cooling, with 30 200 metre-deep geothermal bore holes providing a steady supply of renewable energy.

Pioneering architecture will characterise the gallery of the future, and the Middle East is leading the charge. The breathtaking new Louvre in Abu Dhabi is just one of many astonishing new buildings being created to showcase the world’s art. Set up like a giant floating dome, each gallery is a climate-controlled white cube, nestled under a web-patterned ceiling allowing the light to filter down, as if through palm fronds.

Truly flipping the gallery concept on its head is Dubai’s Museum of the Future. Set to be the world’s most complex building, the superstructure is that of a giant eye, with an open centre, the facade gleaming silver and adorned with Arabic quotations, doubling as highly engineered windows. Most groundbreaking of all - this is not a museum of artifacts already created, but a centre of creation in itself, filled with innovation facilities and design studios.

As with any business, the gallery of the future is only as good as its data, and, in a time when private donations and government grants are declining, institutions need to start getting smarter when it comes to analysing it.

Every day, museums and galleries generate thousands of bits of data, and correct analysis can help answer questions from “what pieces are visitors actually looking at?” to “how can we sell more cappuccinos in the gallery cafe?”. The Art Institute of Chicago has made a start in tackling these, creating its own “business intelligence core” which combines data warehousing and software to generate clear visualisations and actionable insights. Findings include where the gaps in frontline services are and, most excitingly, maps of visitor routes and dwell times in front of specific pieces, gathered by analysing the museum’s WiFi networks. 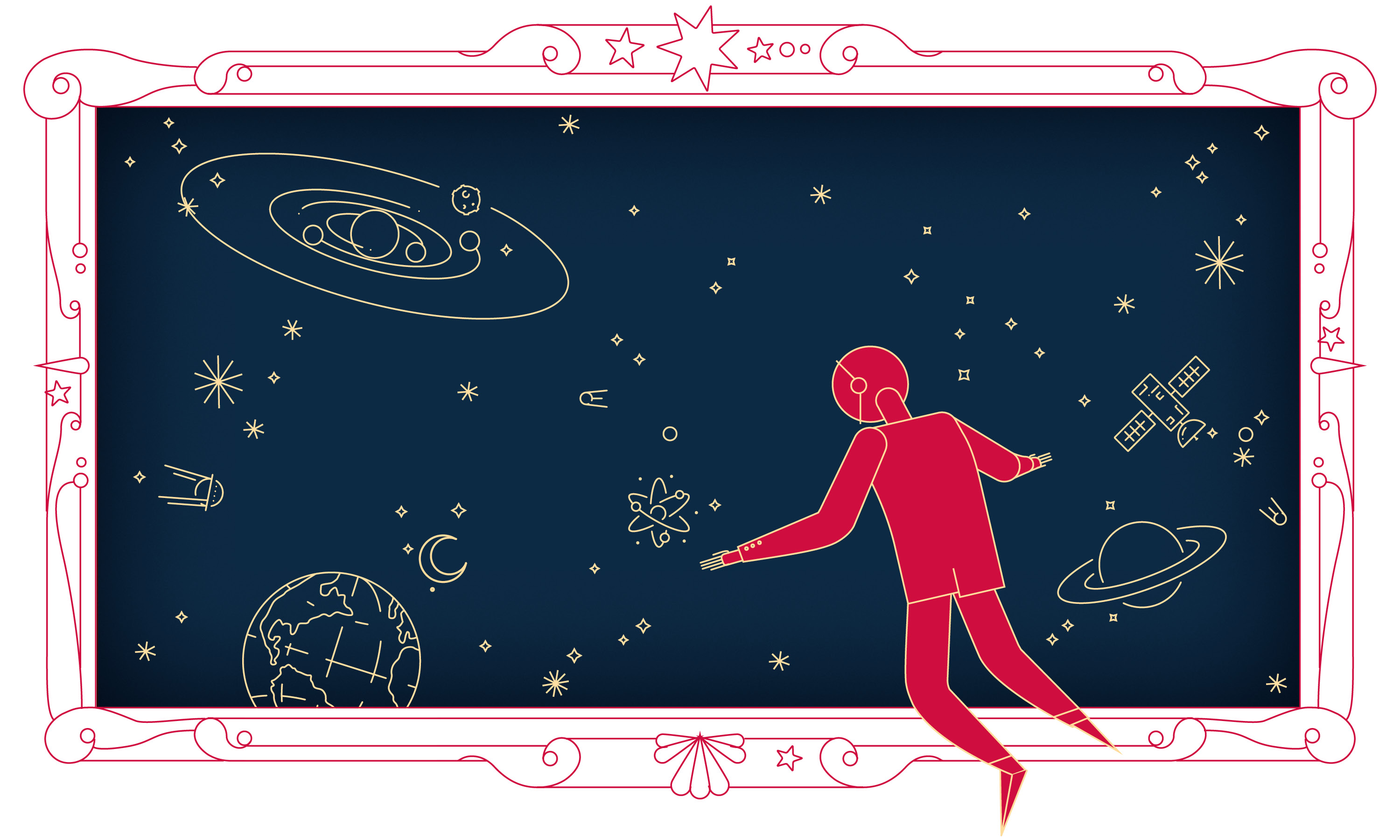 For galleries to survive, they need to think big - and what could be bigger than space?

Commercial space travel hovers on the horizon, with the founders of Tesla and Amazon setting their sights on the other side of the atmosphere. Elon Musk’s SpaceX is set to launch its first manned mission in August 2019 and Jeff Bezos’s company, Blue Origin, has the rocket New Shepard, which is ready to ferry paying tourists on trips to space that same year.

Given this context, a vision put forward by the American Alliance of Museums perhaps isn’t as far-fetched as it initially seems. In their recent magazine, “Museum 2040”, they look to a future where, due to the increasing pressures of climate change, articles of art and historic import are collected and transported to orbiting, temperature-controlled storehouses in space.

We may be many decades away from galleries among the stars, but space tourism is coming and it won’t be long until visitors want more sights to see while they are there.