Fuel cells fit for the future and ready now

Energy evolution has more than a whiff of revolution about it. The scene would appear set for disruptive technologies such as fuel cells to feed the fires, but have we been here before? Fuel cell technology has perhaps been regarded as “the next big thing” in energy generation for a number of years. So what has changed for the time now to be right to realise its commercial potential, at last?

Phil Caldwell, chief executive of Ceres Power, identifies two main drivers. “The first is a global investment megatrend – billions of dollars spent over the past decade by some of the world’s largest companies have resulted in the first wave of fuel cell products coming to market supported by government policy and subsidies in countries such as Japan, Korea and the United States,” he says.

“With these companies now seeking the next generation of technologies to make fuel cells attractive for mass-market adoption, the second key change-agent can be described in just one word – cost.”

Nobody is disputing that fuel cells work. Historically, the thing holding back widespread adoption has been relatively high cost and a perceived lack of infrastructure, as many people still associate them with hydrogen.

However, the fuel cell technology developed by Ceres Power runs on conventional fuels, such as natural gas, biogas and LPG (liquefied petroleum gas), plus it meets the cost challenge by using steel and conventional manufacturing techniques adopted from the solar industry.

With cost potentially no longer an obstacle, other numbers add up to an exciting emerging market opportunity. According to a 2014 report from Navigant Research, global revenue for stationary fuel cells is set to grow exponentially from $1.4 billion in 2013 to $40 billion by 2022.

Japan and Korea lead the way in fuel cell commercialisation. Japan has a progressive energy policy with clear targets to have one million homes powered by fuel cells by 2020 and five million by 2030.

Shortages and brownouts also constitute a fear factor affecting uptake. In the US, unreliable power supply cost the economy a whopping $150 billion in 2013. In response, companies such as eBay, Google and Apple have been deploying fuel cells to ensure security of supply.

So what might the future hold for the UK? Ageing networks and retiring nuclear, coal and oil plants, coupled with sluggish growth rates and inconsistent government support for renewables, make for a vision of potential network vulnerability.

Operating in tandem with renewable energy sources and advances in storage technology, fuel cells can both unlock the potential for energy efficiency and deliver a future of distributed power generation

Fuel cells could plug the UK power gap. Recent studies in the European Union have shown that, for a typical home, a fuel cell combined heat and power system reduces energy consumption by 27 per cent, CO2 emissions by 30 per cent and eliminates other pollutants such as NOX almost entirely.

With the same targets for fuel cell adoption as Japan, nationwide gas savings for the UK would equate to 7 per cent of total imports. The energy system could benefit from a total of 5 gigawatts of new additional flexible distributed capacity, equal to 14 new gas power generation units, plus annual CO2 emissions saved equivalent to ten carbon capture and storage plants.

So with cost squared off, figures start to become compelling for fuel cell technology being used to generate power in homes and businesses, independently of the grid, within the next five years. Alive to the opportunity, Ceres is already working with some of the world’s leading power system companies in Japan, the US and Korea on developing power products using Steel Cell technology, as well as actively seeking more agreements, as global market momentum builds.

According to Mr Caldwell: “Fuel cells are the most efficient way to generate power from natural gas, which is going to remain a significant part of the energy mix over the next 30 to 40 years. Operating in tandem with renewable energy sources and advances in storage technology, fuel cells can both unlock the potential for energy efficiency and deliver a future of distributed power generation, helping answer the world’s call for cleaner, lower-cost and reliable energy.

“From the perspective of investors, cost reduction through innovation brings fuel cells closer to commercialisation. Ready now, this technology changes the future of power generation.” 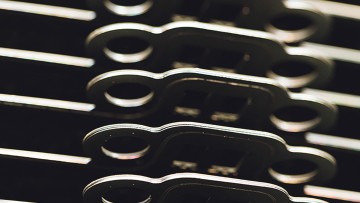 In a world where companies and consumers alike are demanding energy solutions that are not only available at the flick of a switch, safe and secure, but also cheaper and cleaner, the challenge to power providers appears evermore complex.

With so many questions being asked at once, it may come as something of a surprise that one British solution tipped to provide the answer seems a simple one. On the face of it, the Steel Cell from Ceres Power is an attractively easy concept to grasp, as chief technology officer Mark Selby explains: “A steel fuel cell, essentially, is a perforated sheet of steel, with ceramics printed on top. If you put fuel on one side and air on the other, you get a voltage and can generate electricity.”

For a simple idea to impact the market, however, there usually has to be a smart aspect to the success and the Steel Cell is no exception to the rule.

“The clever thing”, adds Mr Selby, “is that we managed to formulate ink you can fire at low enough temperatures not to change the steel. What makes the Steel Cell unique is this combination of low-cost steels and low-cost ceramics, made at low temperatures, with commodity materials.”

Systems using Steel Cell technology can generate electricity at a higher efficiency of 45 to 50 per cent, compared with grid figures of 38 per cent, and Ceres is working on efficiencies of up to 55 per cent.  With products that also capture heat, the efficiency is boosted to around 90 per cent.

The Ceres Steel Cell therefore represents a truly disruptive technology, being lower cost and more robust than other offerings, while using the existing gas infrastructure in the most efficient way. Capable of being mass-produced economically, it can be employed across a range of energy applications from generating heat and power in the home, to running a mission-critical business reliably.