This is a very French story – one of constant innovation through tumultuous times, one of style and effortless chic in which women have played a central role

La Redoute, which operates eight international subsidiaries from Portugal to Russia by way of Britain, owes its name to the street where, in 1837, Joseph Pollet and his son Charles built the first wool spinning mill of Roubaix, in northern France.

Just after the First World War, this family of entrepreneurs and inventors, always thinking ahead of their time, decided to launch a mail order business to help sell old stocks of wool and generate new product lines.

A few years later, in 1928, the first La Redoute catalogue, a 16-page booklet entirely focused on knitting, was born. This was the beginning of a long love story between La Redoute and women.
Success was immediate and spread by word of mouth like wildfire. La Redoute quickly expanded its range of products and, alongside knitting and knitwear, clothes and furniture soon adorned the catalogue.

The idea was, and remains to this day, to conceive, design and produce locally, in the family’s factories, and to make French style affordable to all. By 1962, La Redoute offered 50,000 different products and printed 14 million copies of its catalogue, and for many more decades to come would maintain its position as leader in the distance-selling business.

La Redoute, growing bigger every year, slowly became a permanent feature in family homes. Generations of women eagerly awaited the arrival of the catalogue in their letterbox each summer.
Today, 90 per cent of its ten million customers, spread over 26 countries, are women – and it is no coincidence. The secret of its success lies right here. Women in France and Britain, where the brand has recently celebrated its 20th anniversary, remember those August days browsing through the catalogue, with their grandmother and mother, aunts and sisters at their side, comparing models, discussing cuts and fabrics. 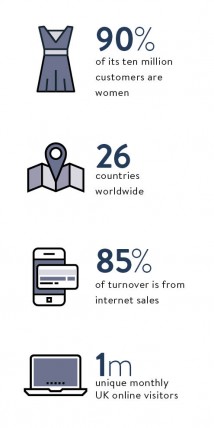 They all remember folding back pages and the thrill of finally choosing and ordering next season’s new outfit. Millions of dog-eared catalogues can indeed be found in French and British homes even if La Redoute is now a thriving online business, generating 85 per cent of its turnover from internet sales with seven million unique monthly online visitors.

If La Redoute has been so popular with women it is because it has always paid attention to them, to their concerns and to their needs, and has evolved with the times, often ahead of social change.

Just a few months after the student protests of May 1968, La Redoute commissioned its first capsule collection of 16 outfits from the designer Emmanuelle Kahnh, a former model and a pioneer of prêt-à-porter of the sixties known as the Mary Quant of French fashion.

Her colourful collection, designed for working women, was an instant hit with its 100,000 limited edition sold out in a few weeks. The formula was so successful that, decades before today’s behemoth high-street retailers, La Redoute pioneered partnerships with prominent couturiers.

Karl Lagerfeld, Jean-Paul Gaultier, Sonia Rykiel, Yves Saint Laurent, Courrèges and more recently Carven and Sézane, young fashionistas’ favourites, have been among those who lent their talent to this most democratic exercise to create a limited edition of beautiful clothes at affordable prices.

The collection Carven designed for British women this year perfectly incarnates this spirit. The creative directors of the Paris couture house founded in 1945 by Madame Carven, and adored by celebrities including Alexa Chung and Diane Kruger, authored a series of figure- flattering, nipped-in waists and mini hemlines, starting at only £29, with nothing coming in at over £149.

Faithful to the forward-looking spirit of its founders, La Redoute has never stopped innovating in other key domains. As a customer care champion, the brand is known and appreciated for its speedy delivery and no-questions returns policy. It was the first to use local shops for free delivery, decades before giant retailers such as Amazon did.

With its look-books on Instagram, its capsule collections and pop-up stores flowering in European cities from Liverpool to Marseille, La Redoute has managed to win over a fourth generation of women.

La Redoute is the place where couture meets street, where high-art designers reach the everyday woman. It is also the only mail order company which is so forward-looking and versatile that it manages to keep up with fashion’s ever-changing unique styles.

Constantly reinventing itself and yet grounded in French history and family traditions, attentive to women’s changing lives and their needs, La Redoute remains a byword for simple and natural chic affordable for the woman in the street who values elegance on a budget.