Rich in history and tradition, France offers record numbers of visitors a mix of old and new with high-tech attractions and futuristic architecture

It’s the most visited country in the world, offering vibrant cities and charming villages with everything from camping holidays to the most prestigious hotels, so it is little wonder the number of visitors to France continues to grow.

Last year 84.5 million people visited, up 0.9 per cent on 2014. Although recent figures have seen a dip following November’s terrorist attacks, the French government is aiming at 100 million visitors in 2020.

But what do visitors find in the land that for many stirs memories of childhood holidays, and conjures up images of bikes, baguettes and berets? Of course the classic elements of la vie française will feature heavily in any trip across the channel.

Between the coffees in pavement cafés, pre-breakfast trips to the boulangerie and strolls around the local markets, visitors will find high-tech museums and jaw-dropping architecture

However, between the coffees in pavement cafés, pre-breakfast trips to the boulangerie and strolls around the local markets, visitors will find high-tech museums and jaw-dropping architecture, along with segway and electric bike tours, and accommodation that ranges from the super-chic B&B to the downright quirky glamping options.

The most recent innovation is Bordeaux’s Cité du Vin, which opened on June 1. This €81-million project is housed in a ten-storey glass structure designed to evoke the swirl of wine poured into a glass. Inside, visitors can trace the history and culture of wine throughout the world, told through such high-tech displays as holographic wine experts. They can also stand out on a 35-metre-high observation deck to admire the rooftops of Bordeaux and the vineyards beyond.

The Cité du Vin comes just 18 months after the city of Lyons’ own architectural masterpiece, the Musée des Confluences, a 33-metre stainless steel and glass edifice that wouldn’t look out of place in Star Wars. It tells the story of humankind through more than two million objects divided into vibrant and engaging displays. 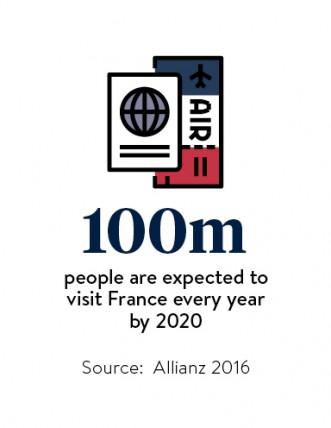 When it comes to France’s newest attractions, stunning architecture is a recurring theme and two of Paris’ newest cultural institutions are housed in similarly striking buildings. The Fondation Louis Vuitton opened in western Paris, in the Bois de Bologne, in October 2014. Its 12 glass “sails”, designed by world-renowned architect Frank Gehry, are every bit as impressive, if not more so, as the exhibits inside.

Meanwhile, in a north-east suburb of the capital, the new Philharmonie de Paris concert hall was designed by visionary French architect Jean Nouvel. Its state-of-the-art acoustics, along with an awe-inspiring auditorium, opened in January 2015, and it has been wowing audiences of its symphony orchestra, jazz and world music concerts since.

Paris will see yet more innovative architecture in the coming years thanks to mayor Anne Hidalgo’s Reinventing Paris scheme, which features 23 projects across the city to transform disused or dilapidated buildings into modern and environmentally friendly living and business spaces.

Elsewhere, plans are afoot for a Cité Internationale de la Gastronomie to be developed within the Grand Hotel-Dieu in Lyon, which will offer food and wine shops, restaurants, and spaces dedicated to exhibitions, cookery courses and demonstrations. This former hospital, and one of the city’s most iconic buildings, will also comprise a luxury hotel, apartments, gardens and courtyards.

In Burgundy at Dijon, a similar project involves the development of a huge cultural centre, offering a Cité du Gastronomie et du Vin as well as a heritage centre, luxury hotel and cinema complex, by the end of 2018.

It isn’t only visitor attractions that are enjoying a new era, the way in which visitors do their sightseeing is changing, too. Nearly a decade after the bike-sharing scheme Vélib’ launched in Paris and became the coolest way to zip around the City of Light, the electric bike has found a place in bike hire centres throughout France, both in towns and rural areas.

Similarly, many places now offer tours on a segway, or gyropod as they call it in France, which give visitors a novel (albeit lazy) ride through forest tracks or rural footpaths, proving that technology doesn’t just stop at the big-budget city museums and is allowing visitors to see the countryside in different ways.

Even without a segway or electric bike, part of the charm of visiting France has always been the chance to get away from it all, to lose yourself in its pretty villages, eat at local bistros and stay in a rustic gîte – and that hasn’t changed. While the campsites and gîtes still offer affordable accommodation options, when it comes to glamping, the spirit of innovation has touched even the most rural corners of the country.

In a bid to offer something fun for a family holiday or an unusual stop-over, campsite owners and farmers are embracing the notion of hébergement insolites or quirky accommodation. As a result, treehouses, yurts and gypsy roulottes are now de rigueur, and so too are the more unusual forms of accommodation, such as star-gazing cabins, and even, in the depths of rural Burgundy, an ecolodge built in the shape of a cow.

Those in search of more luxury, meanwhile, can take comfort in the fact that many hoteliers are ditching the chintz to offer stylishly decorated retreats. In many places, too, even the once-humble B&B has had a makeover to rival the smartest hotels in La Belle France.