When Apple introduced the iPhone with fingerprint identification in 2013, fingerprint sensors went from being an “interesting” technology to a “must-have” overnight. Finally the industry is ready for the massive growth long expected. Among the big players is Norwegian company NEXT Biometrics

The “Apple effect” cannot be overstated, says NEXT chief executive Tore Etholm-Idsøe. It has made everyone aware of the benefits of fingerprint sensors and, when introduced on iconic Apple products, it forced more or less every player to follow.

The technology is not without its infancy problems though. The problems relate mainly to size, price and quality. Even in very high volumes, most current sensors are expensive. In order to achieve the price levels necessary to enable integration in smartphones, tablets and notebooks, sensor size is reduced to a level where quality becomes a major problem.

“The true challenge is not about being able to demonstrate if a product works or not, but whether or not you’re able to produce a sensor system that works reliably for a high enough percentage of the population every day, and to do so at a competitive price,” says Mr Etholm-Idsøe.

“You need to collect the unique features randomly distributed in the human fingerprint and this requires a certain minimum area. The more unique features you capture, the more secure the system is and it becomes less vulnerable to everyday challenges like dirty, cut, worn, dry or wet fingers.”

At NEXT, we do not have to compromise on size and quality to achieve the necessary price level

What happens when the sensor area is too small? The number of false rejections sky rocket. Biometric experts around the world have warned of this and now a major university study, the Madrid Report, has confirmed this logical connection. To cut sensor size in half leads to at least five times higher occurrence of false rejections. To many this becomes an unacceptable failure rate. Still, in order to stay in the game, the leading industry players make significant compromises on size.

NEXT has patented a different technology than other industry players. The “active thermal principle” uses heat conductance instead of the image collection in the so far dominating capacitive technology. As proven in the Madrid study, both principles work just as reliably, given that the sensor size is the same. However, the NEXT sensor is produced with low-temperature polysilicon, not with high-cost silicon as is the case with the present market-dominant competitors.

“At NEXT, we do not have to compromise on size and quality to achieve the necessary price level,” says Mr Etholm-Idsøe.  “Our cost advantage is 70-80 per cent when you compare two sensors of a recommended size and, even when competing with tiny sensors, we still have a cost advantage.”

Being able to manufacture reliable sensors at a competitive price has certainly sparked the interest of the market. In November 2014, NEXT Biometrics signed an agreement with a multinational tier-one company to roll out its fingerprint sensors in multiple products, making it one of only three organisations able to sign such a deal with a world-leading customer.

The start of 2015, meanwhile, saw six organisations place orders for fingerprint sensors to be integrated in small, mass-market products, including payment, home and smartphone-related devices.

“The Apple effect is starting to make a significant impact in multiple new market segments,” says Mr Etholm-Idsøe. “The general acceptance of fingerprinting is increasing fast. All of these new customers have made it clear they need the quality of a large-area sensor at a very low price. In this market, NEXT is the only player. These six new projects each represent six-digit volume potential.

“There’s significant movement now in what we call ‘NEXT-enabled’ devices,” adds Mr Etholm-Idsøe. “We’re seeing a lot of other brand-name players are asking what they can do with this opportunity and how they can integrate them into their devices. There is a surge of interest from manufacturers of devices such as key fobs, home appliances and a range of new and existing gadgets.”

Here, though, reliability is essential and this is where NEXT Biometrics’ proven technology creates entirely new markets.

“In a notebook, tablet or smartphone, you have a plan B, so with your present smartphone when your finger is wet it doesn’t work, it is an obvious inconvenience, but you can still key in your PIN code,” Mr Etholm-Idsøe points out. “In other devices there are no keyboards so people cannot compromise on quality. They need to sell something that will work in 99 per cent-plus of all cases. We are the only player in the world that is able to serve that space.”

Unsurprisingly, given the company’s unique position in the market, Mr Etholm-Idsøe has big plans for the future and the business is currently expanding to ensure it can keep up with demand. “We sold more than 200,000 units when we started last year and we’re now distributing into pilot projects with larger players,” he adds. “We’re going into millions in 2015. And we are positioned to further multiply our volumes in 2016.”

NEXT Biometrics (NEXT:OAX) is a publicly listed company headquartered in Norway, with subsidiaries in Taipei, Shanghai, Seattle, Silicon Valley and Prague 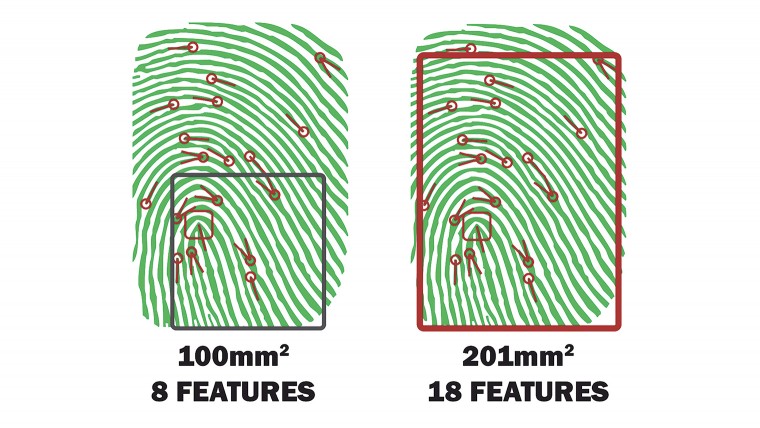 A recent study by the Carlos III University of Madrid proves NEXT’s competitive advantage. The study is by far the most comprehensive comparative test ever done in the fingerprint industry. Some 80 000 fingerprints were collected from a large and representative group of people, and more than 100 million fingerprint comparisons were made. Sensors from NEXT and two other leading suppliers were included in the tests.

The study proved beyond doubt that size is by far the most important factor determining quality in a fingerprint system. If the sensor is too small to capture the full fingerprint image, the quality will drop dramatically. When sensor size is half the necessary area, the number of false rejections will increase fivefold. If the sensor sized is reduced to a third, the number of false rejections is likely to increase tenfold – to a level not accepted by many users.

The results from the study are in line with what biometric experts around the world have said for years. For NEXT it is a proof of the company’s competitive advantage. Today NEXT is the only company able to supply a credible sized sensor at acceptable prices for a mass-market usage. Other suppliers need to cut size and compromise quality in order to reach a price level low enough to be competitive.

The full Madrid Report can be ordered through NEXT Biometrics’ website