The world economy needs to invest $3.7 trillion a year until 2040 to keep pace with profound economic, environmental and demographic changes, according to the G20’s Global Infrastructure Hub. This should create huge opportunities for investors to own infrastructure assets with attractive, stable returns.

By 2040, the global population will grow 25 per cent and the urban population by 46 per cent. Meanwhile, the United Nations sustainable development goals decree that everyone should have clean water, sanitation and electricity.

These changes will trigger massive demand for new infrastructure, with much of it built and managed by the private sector. But institutional investors, such as pension funds, are not satisfied. Current investment is 19 per cent behind the G20 target, and many say there are not enough infrastructure investments available with the right price and risk-return level that they need.

This problem is especially acute in the UK, where the pipeline of suitable infrastructure projects seems to have dried up. Mike Weston, chief executive of the Pensions Infrastructure Platform (PIP), says demand for infrastructure investments is growing.

“As defined benefit pension schemes mature, they want to derisk their investments, typically by investing in index-linked gilts,” he says. “But gilt yields are currently poor value. Infrastructure is the next place to look. It generates good cash flows that can pay pension schemes’ regular outgoings and it tends to have low correlation with other assets.” 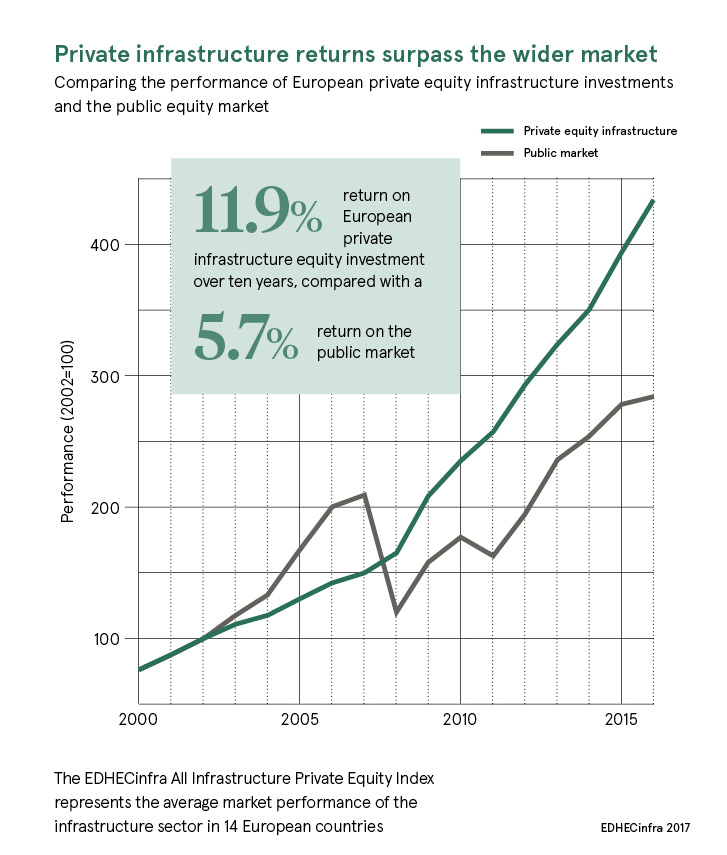 Mr Weston says a typical UK scheme’s allocation to infrastructure is around 2 per cent. But in Canada and Australia it is more like 10 per cent, so there is significant scope for UK schemes to invest more. One reason UK allocations are lower is that Britain has large equity markets, so it has been easier to invest in them compared to alternatives such as infrastructure, he adds.

So Yeun Lim, investment consultant at Willis Towers Watson, says that demand is increasing because, in addition to higher yields, infrastructure features low volatility returns, linked to inflation or gross domestic product, which are perfect for liability matching.

Infrastructure investment initially focused on lower-risk assets, such as toll roads, utilities or regulated energy companies. But as private investment in the sector has more than doubled in the last ten years, competition for these has inflated prices, making it harder to achieve desired returns, says Ms Lim.

Fund managers have, therefore, targeted higher-risk infrastructure assets from different sectors, such as healthcare clinics, and geographies, such as emerging markets. “These assets still have attractive characteristics, such as a monopolistic position and ‘sticky’ income base,” she says. “The investor might not want the extra risk. But if you do, you need certainty about how the manager plans to get the targeted return. You might have to question them more.”

Annabel Wiscarson, head of Europe – global relationship group at IFM Investors, a fund manager set up and owned by pension funds, says: “We are keen on UK infrastructure, but we don’t see much deal flow here. There are more opportunities elsewhere. The UK government’s infrastructure projects are not sharing risk nor providing reasonable returns in a way that works for the private sector.

“Uncertainty around Brexit is also not inviting to investment in UK projects. Our diversification into global infrastructure has, therefore, been popular with UK funds. For example, we have invested in Mexican toll roads. But it takes nimbleness, resources and patience to understand the risks.”

Three of the main risks of investing in infrastructure relate to the economy, regulation and contracts. The economic risk is that there will not be enough demand for your asset. For example, some toll road investments have struggled because traffic flow was lower than projected. If a government or regulator changes the rules in your investment’s operating environment, it could affect returns. Any long-term contract with a single or small number of customers or suppliers creates a risk. So you need to research the strength of the counterparties.

Some see illiquidity as a risk because it is hard to sell your stake in a major infrastructure project before it ends. But Ms Wiscarson says: “I put liquidity risk down the list because investors understand that infrastructure is illiquid. Investing in a fund with a portfolio of projects also spreads this risk. Don’t forget, the investment pays higher returns to compensate investors for these risks.”

Complexity is also an issue. Mr Weston says: “Building a tunnel or power station is immensely complicated, so you have to understand all the inherent risks to invest. You need lots of resources for that, which makes infrastructure investing expensive. PIP was set up to reduce those costs and those barriers to entry.”

Marcus Ayre, co-head of infrastructure transactions at First State Investments, says UK projects have reduced because private sector development has fallen out of favour politically. “But other markets have found ways of matching institutional capital with quality projects, so it can be done,” he says. “Europe has been consistently the most active market for infrastructure. Australia has punched above its weight. The US has always promised a market, but that hasn’t materialised.”

Robert Love, head of research at Asset Intelligence Research, recommends diversifying to infrastructure investments related to new technologies, such as datacentres, fibre optic cables and mobile phone towers. “Sticking to older infrastructure types is a risk because it might be less prevalent in 20 years,” says Mr Love. “But early adoption of new technology is also a risk as these markets evolve quickly.”

Another barrier to investment has been the lack of standardised performance data enabling comparison between investments. Mr Ayre says: “Getting comparable data is not straightforward though indices are appearing. But infrastructure investment has shown itself to be resilient, even in economic downturn, and delivered dividend yield plus capital appreciation over the last decade.”

New comparison data emerged recently from the Edhec Infrastructure Institute, supported by the Organisation for Economic Co-operation and Development, G20 and the World Bank. It published European benchmarks that enable investors to measure risk-adjusted returns and compare investments within the sector and with other asset classes. It also plans to publish global data by early-2019.

Sarah Tame, associate director at Edhec Infrastructure Institute, says: “Although infrastructure is illiquid, our research shows that if you can measure the risk-adjusted performance effectively, investment becomes much less challenging.

“You do see negative returns on some assets. But our benchmarks give a portfolio view and indicate that risks reduce considerably as they spread across the portfolio. The research also shows that infrastructure provided greater performance and lower risk compared to the stock market between 2000 and 2016.

“There is an influx of institutional capital chasing the same trophy assets in Europe. But better data brings greater transparency and opens the decision about where to invest.”