The term “late capitalism”, first used by German economist Werner Sombart in the early-1900s, is coming back into vogue. The phrase is increasingly being used to describe the problems facing the modern global economy. These include gaping inequalities of wealth, stagnant real wages, aggressive and convoluted tax avoidance by global corporations, surveillance by tech firms, abuses of human and workers’ rights, rip-off products sold by the finance sector, and environmental destruction such as the transformation of the oceans into a dumping ground for plastic waste.

There are plenty of scapegoats for such ills. But inadequate corporate governance and, in particular, investors’ and corporations’ obsession with short-term performance are increasingly being seen as among the root causes. And a growing band of investors believe they’ve found a cure.

The thinking is that, if environmental, social and governance (ESG) factors are ingrained in investors’ thinking, then a triple-win will follow – more valuable companies, more value for end-investors and, ultimately, a more sustainable system.

How ESG entered the mainstream

Colin Melvin, founder of Arkadiko Partners, a consultancy that works with investors to improve their stakeholder relationships, says: “For much of my career, investors’ unspoken purpose was if you maximise value, everything else will be fine. The problem with that is you spin off massive externalities and damage your own wellbeing, individually, corporately and systemically. We’re now living with the consequences of that. The investment industry is changing because we know we cannot continue to behave in that way.”

ESG investing was given a shot in the arm when the United Nations’ Principles on Responsible Investment (PRI), which Mr Melvin helped to develop, were introduced in 2006. PRI chief executive Fiona Reynolds says this brought ESG investing into the mainstream, at the same time as bringing greater transparency to financial markets and corporates, as investors were increasingly expecting the companies to increase disclosure about their treatment of employees, their supply chains, and their environmental standards.

It was given a further boost three years ago when 195 countries signed the Paris Climate Agreement. Then, in 2015, a study by George Serafeim, Mozaffar Khan and Aaron Yoon of Harvard Business School demonstrated that socially responsible investing goes way beyond altruism, demonstrating that corporates which invest materially in ESG issues outperform their peers in terms of share price, and sales and profits growth.

“Greenwashing” poses threat to the credibility of ESG

According to the Global Sustainable Investment Alliance, $23 trillion was being responsibly managed as of 2016, up 25 per cent from 2014.  Nearly two thirds of that ($15 trillion) was negative or exclusionary screening, with 45 per cent ($10.4 trillion) in ESG integration strategies. Impact investing – investing in a company with a view to generating a measurable environmental or social impact alongside a financial return – was a smaller but the fastest-growing category.

One of the biggest challenges facing the sector is the lack of clarity about what constitutes good corporate behaviour and what constitutes an ESG fund. The nebulousness has left the door open to “greenwashing”, when corporates and investors exaggerate or misrepresent their ESG credentials, essentially enabling them to win investor support on false pretences. For example, a “closet” index-tracker fund might well own shares in oil firms, tobacco manufacturers and banks that fund fossil fuel extraction, but still be able to mislead investors by characterising itself as environmentally sound.

Ms Reynolds supports regulatory intervention to stamp out such charlatanism. She says the climate-related financial disclosures that are being spearheaded by Bank of England governor Mark Carney and the Financial Stability Board are already making a difference. “I suspect they are going to become the norm for reporting on the financial-related risks associated with climate change,” says Ms Reynolds. She also supports the European Commission’s plan to introduce a rigorous taxonomy for green assets. “That will send very strong signals about what Europe expects,” she adds.

Sony Kapoor, founder of think tank Re-Define, is less convinced that ESG investing is the silver bullet for changing corporate behaviour, but does welcome the EU initiative. “I think there would be a significant benefit, as we’ve seen with ISO standards in manufacturing or energy ratings on electronic goods, in having some standards from a credible external source,” he says.

European governments moving towards sustainability as US moves away

In June the UK government announced it would make it easier for pension fund managers to dump shares in oil, gas and coal companies in favour of longer-term investment in green and social-impact opportunities to avoid the risk of stranded assets, while France last year issued a dedicated green bond that comes with a radical self-imposed transparency requirement.

As European policymakers strive to codify and embed sustainable thinking into investors’ behaviour, the United States under President Donald Trump is moving in the opposite direction

But as European policymakers strive to codify and embed sustainable thinking into investors’ behaviour, the United States under President Donald Trump is moving in the opposite direction. The US Department of Labor, which oversees American pension policy, recently said ESG investing is not always a prudent choice and that ESG factors should not be too readily considered economically relevant by fiduciaries.

The Main Street Investors’ Coalition, founded in May, is also seeking to undermine ESG investing, arguing that the movement is leading investors to play politics with other people’s money, sacrificing returns for ideology. However, Nell Minow, vice chair of ValueEdge Advisors, disputes such arguments calling the coalition an “astroturf” organisation with fake grassroots. “It’s a corporate-funded group with no real ties to retail investors and its advocacy is as fake as its name,” she says.

Many US pension funds, including the giant public sector funds of New York State and California, remain firmly committed to ESG investing. Mr Melvin concludes: “A core dysfunction within our economies is the operations of the financial system, and the short-termism and transactional focus that’s baked into it. The whole fund management sector, not just a part of it, needs to adapt if we are to avoid the massive externalisation of costs that we’ve seen as a consequence of the ways in which the system has been operating up until now.” 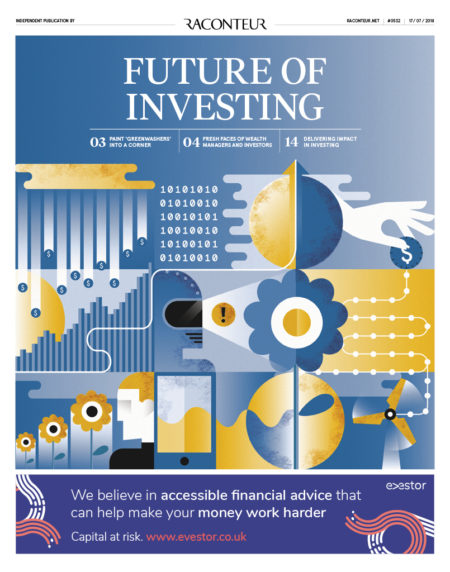