Back in the nineties the British fashion houses Burberry and Jaeger had both seen better days. The former had become a raincoat maker more associated with football hooligans than Hollywood A-listers, while the latter had lost its way from innovative and stylish to staid and conservative. Both longed for the kind of rehabilitation that their Milanese rival Gucci had undergone, turning from basket case to multi-billion-euro label to the stars.

Twenty years on, only one of the British brands had grasped the nettle. To celebrate its 160-year birthday, Burberry released a Christmas advert featuring Domhnall Gleeson, Sienna Miller and Dominic West and directed by Oscar-winner Asif Kapadia. Its huge London store on Regent Street is bustling with well-heeled tourists making the most of the weak pound, snapping up handbags or eating lobster in the Burberry café.

Jaeger, by comparison, is muddling through its first Christmas in more than 80 years without a flagship store in central London. It remains in the red, despite an investment from its owner, the private equity company Better Capital, and the holiday season could be a critical period for the brand.

As the retail industry faces more disruption and a new wave of investors, the extreme fortunes of the two retailers could be a lesson for other established British fashion houses and their backers.

“Jaeger and Burberry are both big brands that have a lot of heritage attached, with plenty of parallels,” says Nivindya Sharma, a senior analyst at retail expert Verdict Retail. The difference, she says, came down to Burberry’s ability to protect its brand, and to its stable ownership.

Harold Tillman, who owned Jaeger for nearly a decade before selling to Better Capital in 2012, says that it could have been so different.

“I’m saddened to see that the business has not made any recovery,” he says. “Had the board of Better Capital listened to my plans, the £60m they have invested in Jaeger to date could have brought the business very close on the heels of Burberry.”

Jaeger should, Tillman believes, have moved away from incessant discounting, and instead focused, as its rival did, on quality and finish.

How to turn it around

Whether it can pull itself out of its spiral depends on how much time its owners give it. Burberry’s turnaround was a slow process. As one former senior Burberry director, who was with the business during its dark days in the 1990s and wished to remain anonymous, explains: “There was a recognition that it would take a long time and we couldn’t do everything straight away.”

The first thing the owners – at that point retailer and services group GUS – had to realise was just how bad things had become.

The former director says that Burberry had lost control over its product. Knock-offs of its trademark check design were flooding the market, and it now made most of its money from charging its franchisees. “Burberry was entirely different in different parts of the world,” he says. “It wasn’t one brand and had different images in the US compared with what it did in the UK.

“An awful lot of the product was supplied by other people. There was no coherence and was seen as an old-style British brand which would sell you a decent-enough raincoat, and that was about it. It was a mess.”

The GUS board brought in Rose Marie Bravo – a no-nonsense New Yorker credited with the turnaround of chain Saks Fifth Avenue in the US – in the summer of 1997. It was a pivotal moment, according to Richard Hyman, a veteran independent retail analyst. “The word transformation is used very liberally in business and has been greatly devalued as a result,” he says. “But Burberry is a transformation that has no comparisons that come to mind… Burberry was a clapped-out brand that sold raincoats people didn’t really want. It didn’t use to be a luxury brand, but was  made into one.”

Bravo pulled Burberry out of smaller retailers, and forced it into more high-profile department stores, such as Harrods and Selfridges. Control over the product was stepped up to near-paranoid proportions, and the company invested heavily in shoring up its place in its biggest market, Japan. Bravo also recognised the importance of the growing Asian market, pitching her tent firmly in China and the Far East, where the emerging middle classes loved the British heritage attached to Burberry – something that still lives on today, although a crackdown on corporate gifting has hit the brand in China. 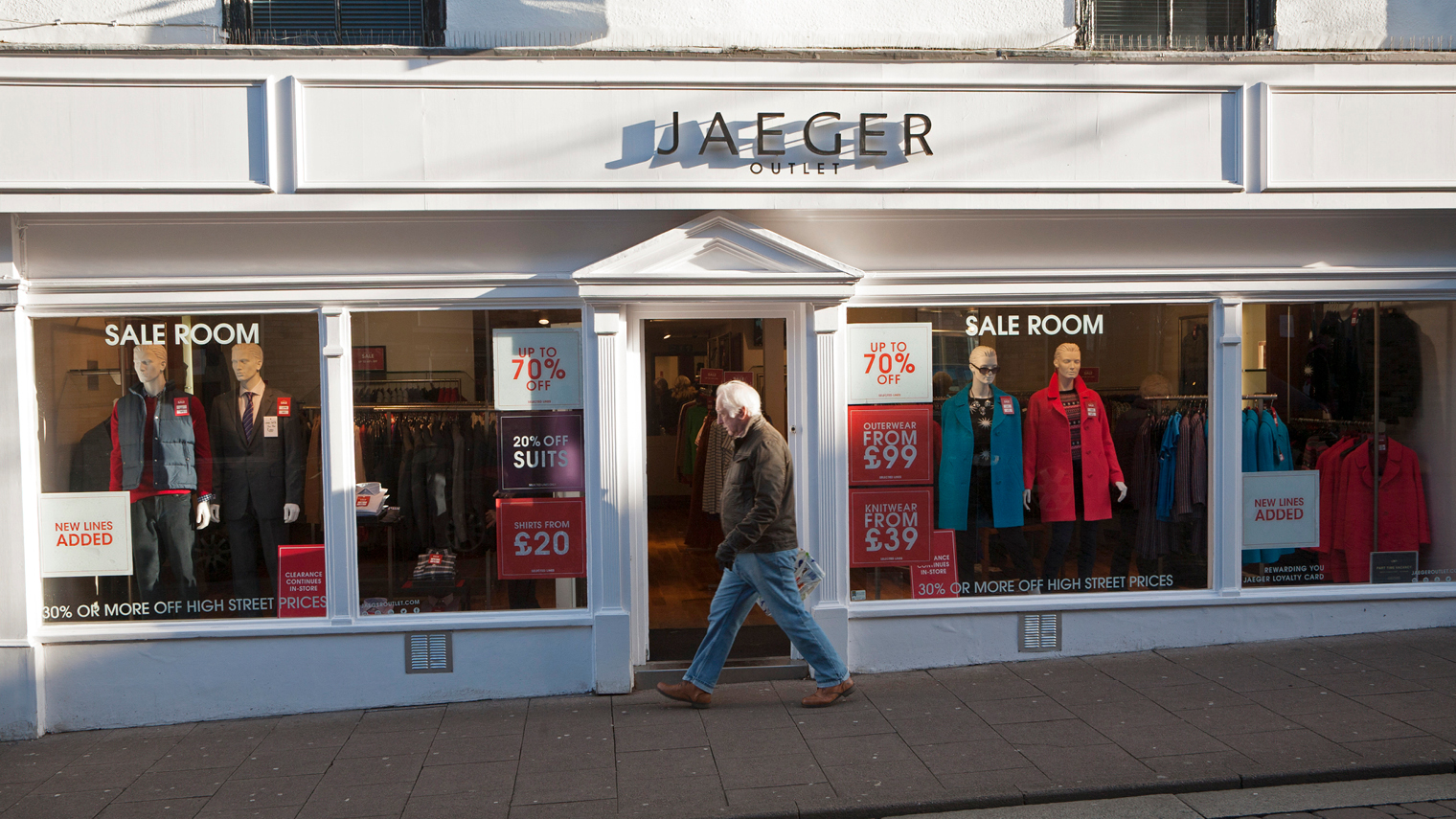 Meanwhile, Jaeger’s owners were still banking on the brand’s fading glory from the 1960s, as the darling of the high street, replete with a Royal Warrant. A British Fashion Award in 1996 gave a brief glimmer of hope, but the company was offloaded by its owner, Coats, to the entrepreneur Richard Thompson, before it was sold on again in 2003 to Tillman.

Another short-lived resurgence, and a slot at London Fashion Week, ended in more chaos, and Tillman sold up to Better Capital. Jaeger’s new CEO, Colin Henry, joked that the amount of polyester in the clothes meant that he was afraid the stores would go up in flames.
Henry’s reign was short and, according to those with knowledge of the situation, characterised by a struggle between his desire to turn Jaeger into a luxury brand, and the owners’ need for a quick turnaround. The relationship turned acrimonious and Henry quit after a deal to move from the flagship store on Regent Street to a smaller outlet was scrapped while he was on holiday.

Although Better Capital says that it is investing heavily in the brand, rumours persist that they are looking to sell. Last year, restructuring specialists AlixPartners were brought in to find a buyer, without success. Better Capital declined to comment.

Hyman says any buyer would need “vast resources and a very long time frame”, and it would be enormously risky. “The investment would have to be deployed very smartly, and I don’t know anyone that is willing to take that risk,” he says.

Finding a buyer may not be impossible, however. US retail brands – including Coach and J.Crew – have been building bridgeheads into the UK market over the past two years, and investors are circling. South African billionaire Christo Wiese has already bought New Look, Apollo Global Management is said to be looking at House of Fraser and Hong Kong-based private equity fund Baring Asia bought Cath Kidston in October 2016. The luxury market is also appealing to investors because of the continuing growth of the wealthy middle classes in the Far East, although a slowdown in China has somewhat weakened that momentum.

Verdict’s Sharma says: “I think it’s always a case of right place, right time. I don’t think it’s impossible for Jaeger to one day recover.” None of the big luxury brands has been consistently successful, she adds. “Fendi, Chanel and Gucci have been there and managed to turn things around.”

Jon Copestake, chief retail and consumer goods analyst at the Economist Intelligence Unit, agrees. “Timing appears to be everything,” he says. “Right now with Asia looking more bearish, it’s a case of wait and see, but there are plenty of smaller British luxury brands which could be primed for takeoff if they get the right exposure. It’s a cliché but there is nothing more fickle than fashion.”

An American import, Black Friday has carved out a bridgehead on the British high street. According to veteran retail analyst Richard Hyman, 90 per cent of UK electrical retailers and just under half of clothing retailers offered discounts on the day last year.
Frequent discounting has become a fixture of the high street in recent years. For some, it is a quick fix to increase sales during tough periods; for others a way to boost investor confidence ahead of January, when trading statements are due.

Hyman says that the psychology behind discounting amounts to a game of chicken between shoppers and shops, with the former weighing up whether to wait for the sale and run the risk of missing out on what they want; and the latter under intense pressure to win customers from their rivals.

Traditionally, mass discounting was fixed to Boxing Day and the summer sales, but then department store Debenhams launched its Blue Cross sale, prompting a rush of flash sales. “The wall-to-wall promotional market we are now in began halfway through 2014,” Hyman says. “Online shopping completely changed things, and it became apparent that there are simply too many shops on the high street.”

There are signs, though, that the attraction is fading. “Shoppers are much smarter now, and tend to do their research before they hit the high street,” one retail chief executive says. “They have all the information at their fingertips to compare prices elsewhere. Discounting has definitely lost its appeal.”