Scuderia Ferrari has been Formula 1’s most recognisable brand for almost 70 years. Not only is it the sport’s oldest team, having debuted in 1950, it is also the most successful, winning 31 world championships.

But the future of Ferrari in F1 has come into question as the sport’s new owner, Liberty Media, works out how to accommodate the demands of its most important stakeholders. And they do not come much bigger than Ferrari.

Combined with other bonuses, means the team is guaranteed $100 million before the season has even started

Ferrari’s significance to F1 is such that at present it has an exclusive ‘long-standing team’ payment agreement, which, combined with other bonuses, means the team is guaranteed $100 million before the season has even started.

A revision of the prize money payout structure to teams is one of Liberty’s many planned areas of change for F1. These are set to come into force for the 2021 season, when the current commercial agreement with teams expires. This deal, known as the Concorde Agreement, was signed under F1’s previous management, led by Bernie Ecclestone, before Liberty’s takeover in January 2017.

Besides changing the way in which prize money is awarded, Liberty also plans to expand F1’s calendar to as many as 25 races, as well as overhauling the current engine specifications – the latter being a particular point of contention for Ferrari.

Ferrari’s F1 interests are overseen by Sergio Marchionne, Ferrari president and chairman of Fiat Chrysler Automobiles. Marchionne has made clear his uncertainty about Liberty’s planned direction, telling investors last November that Ferrari was “at odds in terms of the strategic development” with Liberty.

We see the sport in 2021 taking on a different air, which is going to force some decisions on the part of Ferrari

“We see the sport in 2021 taking on a different air, [which] is going to force some decisions on the part of Ferrari,” Marchionne said. “What I do know is that it is part of our DNA since the day we were born. It’s not as though we can define ourselves differently. But if we change the sandbox to the point where it becomes an unrecognisable sandbox, I don’t want to play any more.” 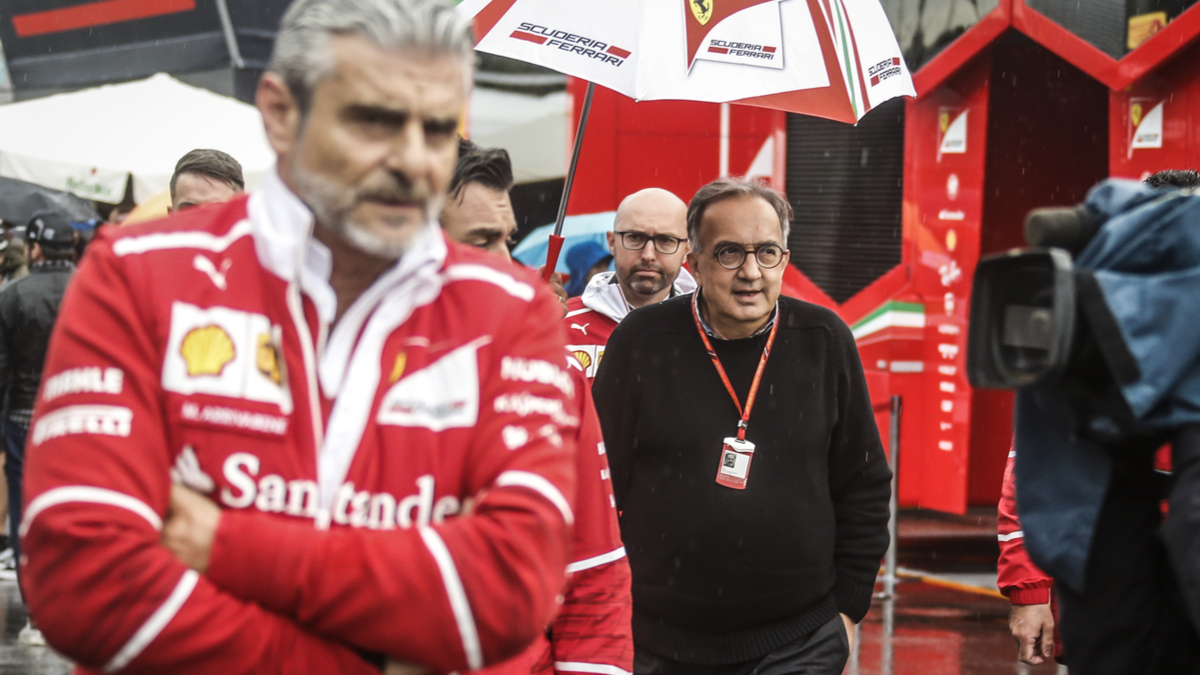 Marchionne added that Ferrari quitting F1 would be “totally beneficial to the profit and loss”, and that the board would be “celebrating here until the cows come home”, such is its investment in the sport, which has not yielded a world title since 2008.

Ferrari has threatened to quit F1 on numerous occasions, often ahead of crunch talks over regulations or commercial agreements. But with F1 under new management, there can be no guarantee of Ferrari’s demands being accommodated, as was often the case under Ecclestone’s rule.

Liberty F1 technical chief Ross Brawn told Sky Sports F1: “Ferrari are part of the DNA of F1 and we don’t want to lose that – but it has to be in the right circumstances. There are boundaries that we feel need to be correct for the sport, and hopefully they are boundaries that they can work in.

“We have to find solutions with Ferrari but it has to be around the right parameters. We can’t have a situation where we do anything a team wants, whether that is Ferrari, Mercedes, Renault etc. We can’t just run a sport on what a team wants,” Brawn added.

Liberty must strike a fine balance between the wishes of the manufacturers that pour millions into their F1 projects and the smaller teams on the grid. Red Bull team boss Christian Horner thinks F1 and its governing body, the FIA, should take a more authoritative stance instead of looking to appease all parties.

“It really needs alignment between the commercial rights holder [F1] and the governing body. As soon as they are on the same page it becomes irrelevant what the teams want,” Horner said.

“They need to align themselves and then present what they want the regulations to be, particularly as far as the power units are concerned. We’ve got interested parties sitting outside Formula 1 and, again, timing is crucial for them if they are looking at entering F1 in 2021,” he added.

With Aston Martin and Porsche heavily linked with a future F1 entry, regulations that do not appease Ferrari might not be a blow for the series in terms of manufacturer involvement. If anything, the right regulations could pave the way for more to join and boost the sport.

But the loss of Ferrari remains F1’s greatest fear in the near future. The manufacturer is the sport’s most recognisable brand, as well as being the most popular worldwide. It adds value to F1, such is its intrinsic history with the sport, and Liberty would not lose it unless all viable alternatives had been explored.

For ex-F1 chief Ecclestone, the importance of keeping the ‘Prancing Horse’ on the grid cannot be understated. He told Germany’s Auto Motor und Sport: “I’m afraid Ferrari could live without Formula 1 – not the other way around.”

For all parties looking to boost F1’s future, it is a scenario they hope will never be truly explored.