The English company, with a claim to inventing the T-shirt, is expanding to export their quality clothing around the world

Don’t be fooled by the marketing mantra of heritage. Yes, Sunspel may have been established back in 1860, but the company’s managing director puts that to one side.

“It’s all well and good being one of the UK’s oldest clothing makers,” says Nicholas Brooke, “but you have to be relevant. You have to take what you’ve always done and apply that in a modern context. People aren’t going to buy your products just because you’ve been making them for a long time.”

Of course, when it comes to Sunspel’s speciality – working with fine jersey cottons to make some of the best T-shirts and boxer shorts around; latterly shirts and polo shirts too – a best-in-class make does count.

The company’s premium T-shirts, for example, are made in England, but begin their life with the finest, long staple cotton picked in Egypt and turned into a hardy two-ply yarn by a specialist spinning mill in India. It is then delivered to Leicester where it’s knitted, to Nottingham where it’s dyed, and then hand cut and sewn in Sunspel’s nearby factory.

It’s here that years of precious know-how in working with very lightweight, luxury cottons have been passed down from generation to generation

The resulting garment is soft and lightweight – perhaps half the weight of more standard T-shirts – but retains its lustre, cool handle and shape. Hems are double-bound. If a T-shirt is striped, the stripe matches body to sleeve. Not that these quality touches are an easy sell.

“We’re wearing basics more and more as we dress less formally. They’re becoming a more important part of our wardrobe. But what’s hard is explaining the difference between a really good basic and, well, a really basic basic,” explains Mr Brooke. “Partly it’s because we’ve got used to wearing semi-disposable basics even though that’s a false economy. And partly it’s because we assume that a basic must be basic to make when actually it’s extremely complicated to do it well. 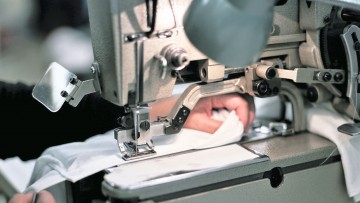 “The proof is in the wearing. And in the last five to ten years men especially have really begun to appreciate that their underwear should be no less a matter of quality and style than their outerwear.”

This is one reason why Sunspel, still an independent company, continues to make its T-shirts in England. It’s here that years of precious know-how in working with very lightweight, luxury cottons have been passed down from generation to generation.

Indeed, Sunspel can make a good claim to having invented the T-shirt here, giving the world one of its most popular and archetypal garments. It also introduced boxer shorts to the UK, saving our menfolk from greying Y-fronts.

“Certainly it’s tough to make in the UK now,” concedes Mr Brooke, “especially if you want to make anything in any volume. That means mechandising the process and you can’t do that with clothing of this quality. It also means that the companies still making here, like Sunspel, tend to be niche, quality makers. You become an expert in what you do. While the ‘made in England’ reputation is something many feel attached to, it’s not why people buy our T-shirts. It’s because of their performance, fit, feel and quality.”

That most British of big-screen icons James Bond may have worn Sunspel in Casino Royale, which further helped the company tap a recent regard internationally for high-end British goods and design.

But the reason why more than 50 per cent of Sunspel’s online sales are now outside the UK, why the company is now pushing an expansion drive that will see shops open in markets around the world, Japan, Germany and Australia included, and why production at the Sunspel factory has doubled over the last few years is much more simple – there are few other brands that can match it, product for product, in terms of quality.