With competition stronger than ever to reach Formula 1, the lack of opportunities for young drivers creates a challenge for the sport 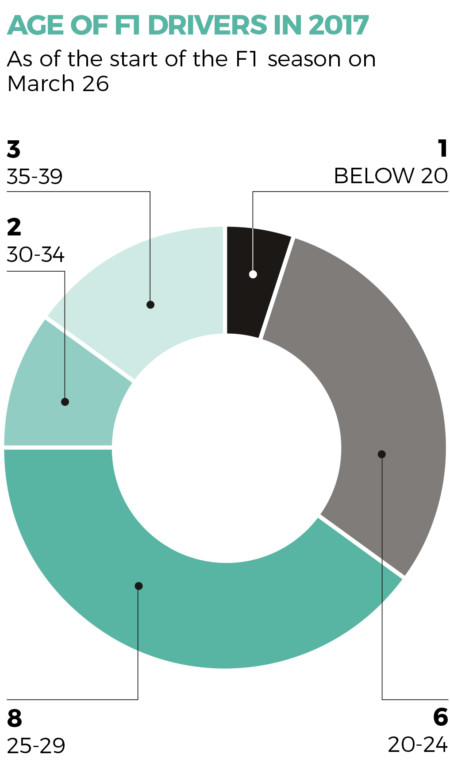 With the start of every Formula 1 season, there is an element of fervor and excitement that surrounds the new brood of youngsters gracing the grid and embarking on their grand prix careers.

Yet in 2017, the lack of drivers moving up to the pinnacle of motorsport became clear with just one full-season debutant joining the field.

Eighteen-year-old Lance Stroll made his F1 bow in March’s Australian Grand Prix with Williams, becoming the second-youngest driver in the history of the sport, and the first to have arrived through the Fédération Internationale de l’Automobile’s recently created Formula 4 category. The formation of national F4 championships acted as a first step for young talents coming out of go-karts, while the revival of Formula 2 in March created a set ladder for drivers: F4 to F3 to F2 to F1.

And yet Mr Stroll had not followed that blueprint. The Canadian won the Italian F4 series back in 2015 before spending two years in European F3, winning the title at the second attempt in record-breaking fashion. The victory was impressive, but not the catalyst in securing him an F1 seat. The key to joining Williams was a $35-million contribution by his billionaire father, Lawrence Stroll. Despite appearing to have the talent to warrant a shot at F1 someday, without this funding a chance so early would have been unlikely.

Young drivers in F1 are not common. While the likes of Max Verstappen – F1’s youngest-ever winner at 18 – and Esteban Ocon are future stars, their rise through the ranks has largely come as the result of support from junior programmes with Red Bull and Mercedes respectively. For racers lacking this support, the mountain to F1 is a daunting – and expensive – one to climb.

The numbers involved prove the challenge racing youngsters face. A F4 season can be completed for around €200,000, yet even if a driver wins that with ease, moving up to F3 will see this figure escalate to €700,000. A year in F2 will then set drivers back €1.3 million. Finding sponsorship is an eternal battle for drivers.

One driver currently on the ladder towards F1 is Callum Ilott. The Briton is about to begin his third season in F3, and is one of the championship favourites, yet he is acutely aware of the saturation of drivers at the top that limits opportunities.

“I think to be fair there needs to be a freshening up of F1 drivers,” Mr Ilott says. “There are a lot of drivers who aren’t getting the opportunity that 20 years ago they would have. For the amount you put yourself through in the sport, to not get a shot in F1 is really harsh.”

Much of this has been driven by the escalation of costs in racing, particularly in F1. The sport’s new owner, Liberty Media, has a clear goal to make the sport more sustainable, ensuring that racing is affordable.

While this may reduce the need for teams to rely on finance from drivers to secure a seat, it is unlikely to create more real opportunities for young drivers to prove their talent in F1 cars, with the chance to bolster budgets often being too lucrative to turn down. If Liberty can boost team numbers in F1 and create more seats, young drivers would have more opportunities in the pinnacle of motorsport.

A more direct approach to getting youngsters behind the wheel would also help freshen up F1’s image. While teams are required to allocate half of their in-season running to junior drivers, this amounts to just two days per year. Were testing restrictions to be eased so that young drivers could get meaningful track time, perhaps even on race weekends – the idea of a third car in races for juniors has been floated – then it would aid the turnover of drivers.

“That’s what I think the sport should aim for,” says Mr Ilott. “Instead of the real motorsport fanatics having to look at junior single seaters, you should be promoting junior drivers in F1. That helps young drivers, and if you promote them in F1, that opens it up for sponsors as well.”

Boosting the number of fresh faces on the grid will also help Liberty in its bid to increase F1’s appeal to a younger audience. The sport has great heritage, yet matching this up with the millennial age is a challenge – but it’s one that youngsters can help with, their chutzpah and bravery proving popular.

As Liberty pushes to increase F1’s profile and fulfil the sport’s potential, a youthful, fresh approach in all areas will be key – and it will be the racing stars of tomorrow such as Mr Verstappen and Mr fulfill who help drive that change on track.