The ubiquitous smartphone, with its seemingly endless stream of recreational apps and games, is fast approaching medical device status as ophthalmology powers into a digital age. 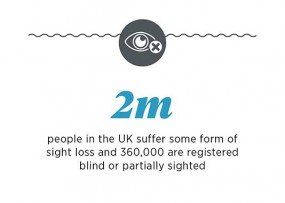 The field is now crackling with technology which has already empowered opticians to warn of a range of health conditions, and promises much more for sight and general health.

For generations, the first line of eyesight awareness has been the Snellen Chart, the card of scaled block capital letters present in doctors’ chambers since its inception in 1862.  But its days and the static nature of eye tests are now numbered.

Computer scientists and eye specialists have combined to harness the power of the mobile phone to provide a new diagnostic tool as new devices improve everything from high street eye tests to complex surgery.

“Technology is giving us a better way of diagnosing a range of conditions and its applications are exciting,” says Iain Livingstone, an ophthalmologist from the Glasgow Centre of Ophthalmic Research at NHS Greater Glasgow and Clyde. “The Snellen Chart could soon be a thing of the past.”

He is part of the pioneering PEEK Project (portable eye examination kit), which has re-engineered the mobile phone with cataract and retina scanning capabilities. Its ease of use and accuracy has huge implications for routine eye tests and screening programmes in some of the poorest countries in the world. 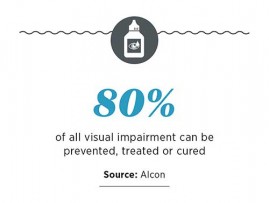 It has won plaudits from philanthropist Bill Gates and could replace elements of the optician’s examinations which need to be done with expensive, bulky equipment and trained staff. Peek-enabled phones also make it easy for a GP or A&E doctor to scan a patient’s eye while transmitting a live feed of the images to a consultant.

“Through serendipity the optical parts of a smartphone are smaller than the eye’s pupil which makes it easier to look at the retina and diagnose not just eye problems, but conditions such as high blood pressure and lesions to the brain that transmit pressure to the optic nerve,” says Dr Livingstone.

The most immediate hope is that the phones can tackle the onslaught of diabetic retinopathy and the lack of eye test provision in poorer countries. 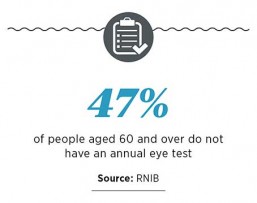 But it could also revitalise the UK’s poor approach to eye health characterised by 40 per cent of the population ignoring their failing sight and only 47 per cent having annual eye tests, according to the Royal National Institute for the Blind (RNIB).

Steve Tyler, RNIB head of solutions, strategy and accessibility, says: “There may not be game-changing treatments for a decade, but the technology revolution is already happening and heralding fundamental changes in eye care.”

A camera device, powered by algorithms that crunch data and link to GPS systems, is already available to the blind or partially sighted, providing a guiding stream of information and geographic prompts.

3D printing also provides the possibility of manufacturing “eyes” that can be pre-loaded with sensors which connect with information sources. “There are lots of ethical and challenging considerations ahead, but this is where technology is going,” adds Mr Tyler. “Research is advanced on brain-to-cloud interface, where devices can translate brain impulses into commands and controls. The predictions are that it will be here by 2030 and, whatever the timing, it is an inevitability and has huge implications for the partially sighted and blind.”

Alcon, a division of the pharmaceutical giant Novartis and the world’s leading manufacturer of eyecare products, is developing a panoptic contact lens covering short, intermediate and distance vision.

“It can sense when you are reading something up close by reacting to subtle changes in the eye muscles which adjust when object distance varies,” says Peter Richardson, the company’s chief medical officer. “The lens knows if you are trying to look at something in the distance or up close even though you are not even aware that it is happening.

“The lens splits the light so that the brain can process the different cues. It is a really exciting technological development and we are moving towards its large-scale use.”

For Dr Livingstone and his team, the real payload from technology is the ability to diagnose conditions early and repair defective eyesight before changes become irreversible. He believes that computer tablets and iPads will play an increasing role in future eye tests as they can equal the accuracy of modern testing with optician-based equipment.

“One of the most promising technologies we have under development is an android tablet application that can screen for visual stroke,” he adds. “The current standard test, believe it or not, is someone wiggling their fingers in the periphery trying to map out what they can see. While automated alternatives exist, they remain largely within the realm of sub-specialist clinics.”

Dr Livingstone is working with Greater Glasgow and Clyde’s Medical Devices Unit on a free stroke vision app which uses dots on a screen to create a visual field map for each eye to give an accurate assessment of post-stroke vision.

“The response from patient groups has been great. It benefits the patients and is also a valuable tool to show to family and the care team a simulation of what vision the patient has so they can understand their needs,” he says.

The bionic eye may be a distant hope, but technology is demonstrating a clear ability to arrest sight decline, improve vision and create a new dynamic where the members of the public can use their mobile phones medically.

A potentially life-saving element of the eye test, which produces a magnified digital photographic image of the back of the eye, this enables the optometrist to detect vision problems and other health issues, including hidden tumours and cysts.

A non-invasive imaging technique, described as an optical ultrasound, this uses light waves to take cross-section images of tissue in the retina. A 3D profile provides a view deep into the eye to detect age-related macular degeneration (AMD), glaucoma and diabetic eye disease.

A UK-developed device, this shines a blue light into a patient’s eye to test the density of pigments that are a key indicator of AMD, a leading cause of blindness which affects 30 per cent of those aged over 65.

The first “bionic” eye implant was performed in Manchester in July on a patient with dry AMD who had lost his central vision. The implant receives visual information from a miniature camera, mounted on the patient’s spectacles, which is converted into electrical impulses to stimulate the retina’s remaining cells and connect to the brain.

A polymer lens that can be placed into the eye, using a syringe in an eight-minute operation, claims to provide better than 20/20 vision and stop cataracts developing. The lens contains advanced camera technology and, although its founder predicts availability within two years, the process still needs to clear clinical trials.