French exports span a wide range of goods and services, from aerospace and luxury, telecoms and cars to biros, razors and disposable lighters, bringing in multi-billions to the national economy

Walk around South Kensington, the heart of London’s French community, and you can get a taste of France, literally, with the many food shops and restaurants catering for Gallic gastronomes.
With the area’s Lycée, Insitut Français and French bookshop, you will also get a flavour of French culture. Go a few hundred yards to Sloane Street and, with shops such as Hermes, Dior, Saint Laurent, Paule Ka and Chloé, you can experience French chic in its most stylish and expensive form.

For most of us in Britain, these places sum up French exports and perhaps France itself – food, drink, creativity, fragrances and fashion. But this image doesn’t begin to do justice to the vast variety of French products that we use.

France is, after all, the world’s sixth largest exporter, with sales of goods amounting to €455.1 billion (£347 billion) in 2015. This is a small improvement on the previous year and has seen the United States becoming France’s second biggest market after Germany. French exports tend to be particularly concentrated in high value-added areas, some of which you might expect. But others might surprise you.

In fact, the biggest success story is France’s aerospace industry, which accounts for more than 10 per cent of total exports and punches well above its weight, not only through France’s role in assembling Airbus planes in Toulouse, but also through companies such as fighter and executive jet maker Dassault.

And there is also another important factor. In the words of Vincent Gorry of GIFAS, the body that represents the French aerospace industry: “If you buy an aircraft, there are some parts you can’t change, but others that you can, such as the seats, engines, wheels and brakes. Typically French companies that make these sorts of parts sell not only to Airbus, but also directly to foreign companies.

“The success of Airbus has allowed them to become more efficient and competitive. They export almost half of their turnover. And more than 80 per cent of French aerospace manufacture is exported.” 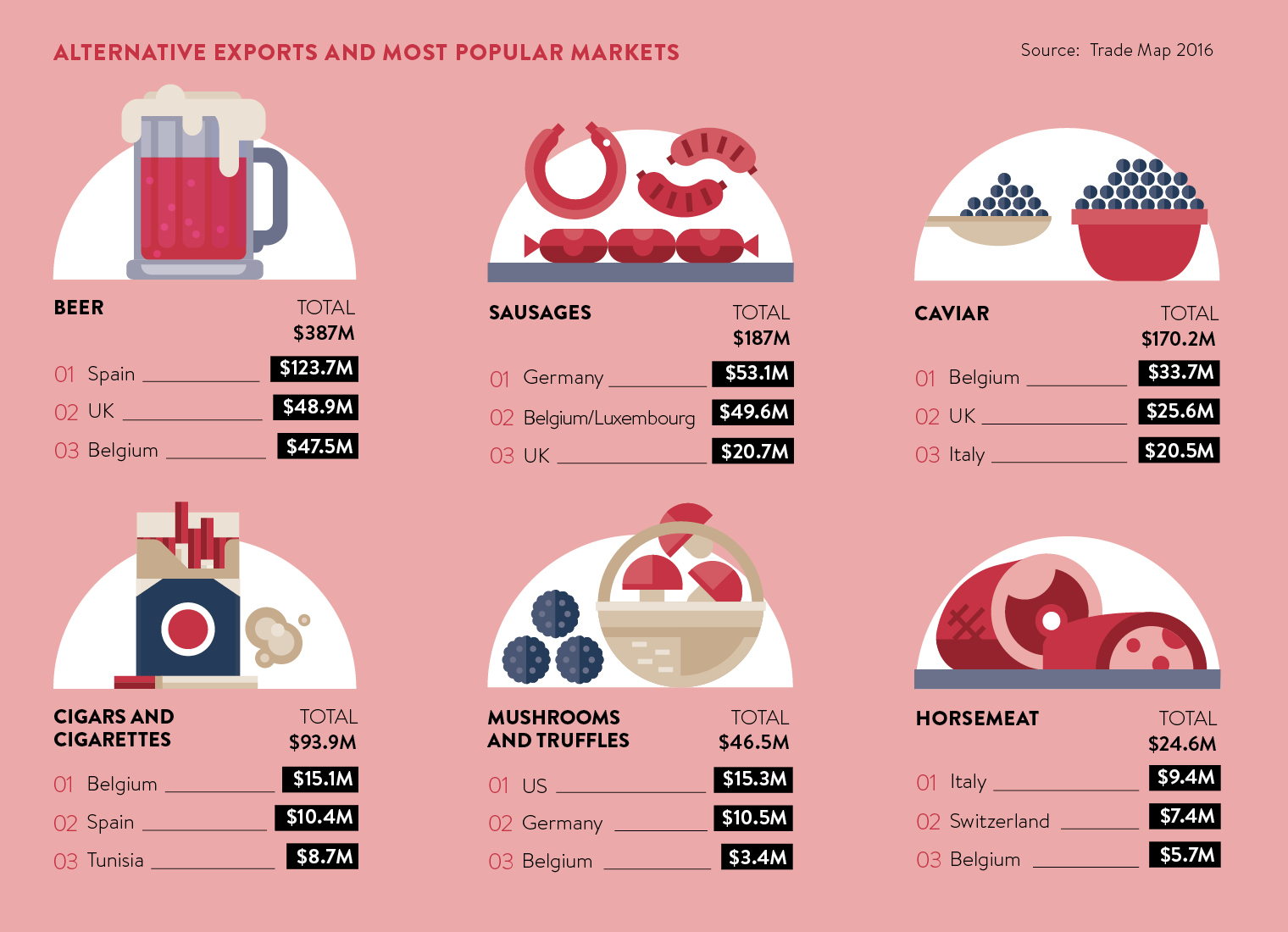 Above all, he stresses: “In France we can make all the parts and products in the market – passenger jets, business planes, fighters, helicopters and turbo props. We are second only to the United States.” France’s trade surplus in aerospace, as a result, is more than €22 billion (£16.8 billion).

Transport in general is a major contributor to the French economy, with the automotive industry, not only car makers such as Peugot and Renault, but also commercial vehicles and components, recovering from a major downturn in 2009 to show an increase in exports of almost 9 per cent last year.

The British think of themselves as a maritime nation but, with its considerable coastline, France is no landlubber either, with almost 5,000 companies involved in the manufacture of pleasure boats and parts. Almost two thirds of the €4-billion (£3-billion) annual sales consist of exports. Leading names include Beneteau, founded in 1884, with its range of sailing yachts, power boats and motor cruisers on which to lead the good life.

Packaged medicines and pharmaceuticals generally are another less obvious area of exports, amounting to 6.4 per cent in 2015, led by Sanofi, the world’s fourth largest pharmaceutical company. But the French subsidiaries of foreign drug manufacturers also play a major part with American giant Lilly, for instance, exporting 80 per cent of its French production.

“A lot of foreign companies invest in France to re-export mainly because of our productivity, strong infrastructure and logistics,” says Muriel Penicaud, chief executive of Business France, the equivalent of government-backed UK Trade & Investment. Remarkably, a third of French exports are actually made by foreign firms.

When it comes to lifestyle and elegance, the world still sees France as the leader

More invisibly, France is the world’s third largest exporter of services, amounting to €266 billion (£202.6 billion) last year, in areas such as telecoms, insurance, finance and events.

And it’s easy to overlook French exports of everyday items from businesses such as BIC, the second biggest player in Europe and North America for its pens and disposable razors. As befits a company from the country that gave us Gauloises and Gitanes, BIC dominates the world market in cigarette lighters.

But the British image of French exports is by no means wrong. When it comes to lifestyle and elegance, the world still sees France as the leader, with a 9 per cent increase in the export of luxury goods last year.

The biggest players are the conglomerates Kering (brands include Saint Laurent, Gucci and Puma) and Bernard Arnault’s LVMH group of more than 60 companies, which produce everything to tempt the well-heeled from champagne (Krug and Dom Perignon), to fashion (Marc Jacobs), to scent (Guerlain) and watches (Hublot). Hermes, equally a byword for eye-wateringly expensive leather goods (think Birkin and Kelly bags costing thousands) and accessories, has celebrated particularly strong growth in Japan so far this year.

The middle class around the world is growing, creating a demand for the best, which France is seen as providing in many sectors

“The middle class around the world is growing,” explains Ms Penicaud, “creating a demand for the best, which France is seen as providing in many sectors. And luxury is highly profitable.”
Again fitting the image, perfumes, cosmetics and grooming products are among France’s most important exports, led by L’Oréal, the world’s biggest beauty company.

And what would our idea of France be without le vin? Actually, worldwide wine sales in terms of volume, though not value, fell slightly last year. But spirits did much better. The Chinese are proving to be particularly partial to French tipples, importing 30 per cent more wine last year than in 2014. There was also a considerable increase in sales to the United States, but the Americans are clearly discerning drinkers, preferring finer wines and champagne to everyday plonk.

In Britain, according to Anne Burchett, of French food and drink marketing organisation Sopexa: “French wines have lost ground over the last 15 years in the off-trade, because there are so many other countries competing, but they are still the leader in restaurants.” Despite that, Britain is still France’s second best customer.

It’s not just French wine and spirits that slake our thirst. Even without the rumour, unfounded as it turned out, that Selfridges in London was going to open a water bar, we should need little reminding as we knock back the refreshing Vittel, Perrier or Evian that France is the world’s biggest exporter of mineral water, bringing in €600 million (£457 million) in foreign sales.

Fine food, of course, is key to the French art de vivre and the world’s vision of France. It’s a sign of sophistication wherever you are and accounts for as much as a tenth of French exports. Temptations include packaged products, such as chocolate, biscuits, charcuterie, jams, yogurts from companies such as Danone, and butter. Britain is a leading importer of all of these.

And what would life be without French cheese, particularly less pungent varieties, which accounts for €3 billion (£2.3 billion) of exports, with the Germans taking the lead, and a growing number of gourmets in the Middle East and Asia developing a fondness for fromage.

French fruit and vegetables also tickle our taste buds, both directly and indirectly as it’s little known that France is the world’s leading exporter of agricultural crop seeds.

So French products play a major part in our lives, whether we realise it or not. The last word goes to Ms Penicaud of Business France, who neatly sums up French exports: “If you want to buy a sailing boat with good food, fine wine and pure mineral water on board, along with a high-quality cigarette lighter and sunscreen, good insurance, a full first aid kit, and, for when you land, luxury clothing and a memorable perfume – buy from France.”