Exploring the possibilities of VR

When virtual reality or VR emerged it was widely assumed the primary market would be consumers playing games. Then very quickly businesses in all sectors began to see how the technology could reshape the way they create products and how they sell.

German car manufacturer Audi recognised very early on the potential of VR as a key future technology for digital retail formats. For almost three years, Audi has been developing, in co-operation with six specialised companies, a VR retailing tool that is unprecedented in its scope, called the Audi VR experience. The system has now been successfully tested internationally and is set to be introduced to first dealerships worldwide from 2016.

The Audi VR experience gives customers the opportunity to configure any Audi model with the sales adviser, and to experience in virtual reality their dream car in a highly authentic way and in every detail through an advanced VR headset. Audi has invested considerable time and effort in realising an individual interaction and sound concept as well as a special graphics engine, optimised for VR and developed in conjunction with British specialists Zerolight. 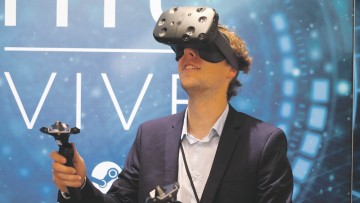 Since the beginning of the year, staff at Audi headquarters in Ingolstadt have been working on the latest version of the VR experience, which will soon be launched in Audi city showrooms and in first regular dealerships. Using HTC’s Vive VR headset in a 5x5-metre space, the expansion stage of the system enables customers to experience their virtual dream car in an exceptionally realistic way and is due to be introduced to the public for the first time at the 2016 Consumer Electronics Show in Las Vegas.

“High-quality VR retail applications that are now possible with advanced VR headsets, such as HTC’s Vive and its powerful tracking system, were inconceivable until very recently due to our high quality standards and the associated costs,” says Marcus Kühne, project lead and tech scout at Audi. “The benefits of VR technology will not only help customers to make their purchase decision, but will also offer them truly fascinating experiences.”

Audi’s top management predict a great future for the technology. Sven Schuwirth, senior director of brand strategy and digitalisation, says: “As a pioneer in digital business, we have a unique opportunity to not merely wait for immersive technologies such as virtual reality to make a breakthrough among the general public, but to play an active role in achieving that breakthrough.” It’s an opportunity that Audi is clearly making the most of.

Using VR for business requires the very best tools. The improvised smartphone-in-a-cardboard-visor method of VR is fun for children, but not suitable for portraying a professional image to consumers or for developing commercial-grade VR applications.

At the high end of VR there is a lot of variation in headset quality. For example, some VR headsets use cameras to track head movement. The use of cameras introduces a lag. When looking at immersive environments, this lag is particularly noticeable and undermines the effect. The very best headsets, such as the HTC Vive, use lasers to track movement. The pinpoint accuracy helps to create a truly convincing VR experience.

Resolution and sensors are important. The HTC Vive offers a 1,080x1,200-pixel screen for each eye, with a refresh rate of 90 frames a second. There are gyrosensors and accelerometers on both the head-mounted display and controllers.

It is also important to have a strong development infrastructure for the headset. Developers need a platform they are familiar with and which offers support. Currently the most widely used is Steam VR, created by the world’s biggest games distributor Valve. Steam’s official partner in VR is HTC.

Jon Goddard, head of marketing for HTC Vive in Europe, says: “Valve’s OpenVR gives developers the perfect way to create virtual reality experiences. It includes Unity3D, Unreal and many other games engines which are used by the world’s best games developers. Our partnership with Steam means developers can harness all the support of the Steam community. When you upload a VR application you’ll get feedback and pointers. And Steam is the perfect way to distribute your VR applications to a global audience.”

By working with the right headset in the ideal development environment, companies can accelerate their progress in creating stunning VR applications and products

Versatility is crucial. Product designers will need to know they can use their core applications with the headset. Dassault Systèmes is the creator of the 3DEXPERIENCE suite of computer-aided design and product life cycle management tools. It has chosen to work with HTC Vive.

David Nahon, leader of immersive reality at Dassault Systèmes, says the tie-up came after a demonstration with the HTC Vive. He recalls his reaction. “After a 20-year career in the VR hardware and software industry, I have just lived the most amazing immersive experience ever,” he says.

By combining the HTC Vive with the Dassault Systèmes 3DEXPERIENCE suite, companies can use CATIA, SOLIDWORKS, DELMIA or SIMULIA in full VR. “They will use VR all the time, every time,” says Mr Nahon. “This has proven to reduce design errors, achieve more accurate insights, shorten production cycles and avoid unnecessary physical prototypes.”

By working with the right headset in the ideal development environment, companies can accelerate their progress in creating stunning VR applications and products. Anyone prepared to take the leap into VR will find the industry hugely supportive. HTC offers a development kit, including the headset with laser trackers, controllers and software. In fact, HTC is poised to send out another wave of 7,000 development kits at the turn of the year. Other big technology brands are committed to support VR. HTC works with Nvidia, Intel, HP and Dell, to name a few.

This is the age of VR. As Mr Nahon concludes: “3D is a universal language that simplifies the communication of ideas, dreams and life. 3D can be immersive. It lets people understand complexity in simple ways. And that helps them make better personal and professional decisions when they can see the big picture with all of its details.”

Businesses are going to love exploring the possibilities of VR.