Regulation and voluntary initiatives by food manufacturers have combined to improve nutrition, but areas for improvement remain

Over the past 40 years significant clinical advances have been made in treating heart disease; however, the focus has now switched to preventing ill-health through lifestyle changes, such as stopping smoking, increasing exercise and eating healthy food. This has led to a greater demand for improved nutrition.

Linda Main, lead dietician for HEART UK, the cholesterol charity, says this demand has been driven by various factors, which include new UK and European Union regulations, scientific evidence, and improved public awareness about the importance of nutrition in heart disease.

“In response, many manufacturers have reformulated their food products and revised their branding for consumers,” she says. October, for example, is National Cholesterol Month.

An early factor driving consumer product changes was the 2003 Scientific Advisory Committee on Nutrition’s report on salt and health, which set initial salt reduction targets. Since then, the average daily salt intake in the UK has fallen by 15 per cent. This is mainly due to manufacturers reformulating the salt content in a wide range of products.

Consumer awareness of trans-fat content has also forced many UK manufacturers to reduce the amount of this substance in their food products. Trans-fats can damage health by increasing the levels of LDL – “bad” cholesterol – and reducing levels of HDL – “good” cholesterol. The UK consumption of trans-fats has decreased from 2.1 per cent of average energy intake in 1985 to an estimated 0.7 per cent in 2012.

In addition, many food manufacturers have signed up to the elimination of trans-fats under the Department of Health’s 2010 Responsibility Deal, which relies on voluntary action by producers and retailers to tackle diet-related ill-health.

In line with this, several companies, including Mars, Kellogg’s and McDonald’s, have changed their product recipes. In January, Britvic also announced it would be axing all full-sugar lines from its Fruit Shoot squash range. In addition, it will be carrying out a rebranding launch of its no added sugar range. According to Britvic, the company has made these decisions after “listening and responding to parents’ needs, and implementing our own plans to support voluntary initiatives to encourage healthy lifestyles”.

The UK’s voluntary traffic light food labelling system, rolled out in 2013, has also had a major impact on the reformulation of food products. Developed by the Food Standards Agency, this scheme was designed to make it easier for consumers to make healthier choices. The system uses red, amber and green signals on the front of packages to show whether a product is high, medium or low in fat, saturated fat, sugars and salt.

Many large UK retailers and manufacturers have since adopted this colour-coded system. Ms Main from HEART UK points out: “After Tesco started using it, they saw that customers were spending more time comparing these nutrition labels across different brands and often opted for the healthier option.” As a result, Tesco changed the ingredients in many of their own products to reduce their use of red labels.

In July 2014, HEART UK trademarked its Product Approval Scheme logo across the EU as a benchmark for cholesterol-lowering foods available for consumers. The logo can now be used on packs and in advertising and other promotional materials by food products that pass stringent tests overseen by the HEART UK Product Approval Working Group.

Several products have now received this approval, such as Benecol, a range of spreads, yogurts and mini-drinks fortified with plant stanols. Studies show a daily intake of Benecol lowers cholesterol by 7 to 10 per cent in two to three weeks, as part of a healthy diet and lifestyle. Other approved HEART UK products include Alpro, MornFlake, Shredded Wheat and Oatwell. 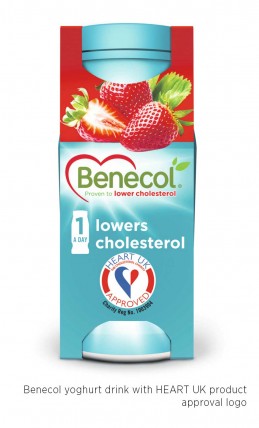 However, not all brands have been so successful. In 2014, Kellogg’s withdrew cholesterol-lowering cereal Optiva, after eight years on the UK market, following poor retail sales. According to food industry experts, Optiva struggled to find its brand identity.

Brand specialists Thrive Unlimited stress that consumer healthcare marketing should be “accessible, chatty, natural brands that talk to people, rather than those that dictate and shout about their health credentials”.

Research shows that marketing plays a significant role in influencing children’s dietary choices. The current self-regulatory system for non-broadcast advertising is weak and allows products which are outlawed from children’s television to be marketed to children online.

Websites for food and drinks almost exclusively promote products that are high in sugar and/or fat and/or salt, often using techniques which children will find difficult to identify as advertising, for example “advergames”, downloads and competitions. Studies show that advergames, which are currently unregulated, are even more powerful than traditional advertising.

Malcolm Clark, co-ordinator of the Children’s Food Campaign (CFC) says: “Marketing plays a significant role in influencing children’s food choices.” In 2014, the CFC and the British Heart Foundation jointly delivered a 30,000-signature petition to 10 Downing Street calling for a ban on junk food adverts before the 9pm watershed.

“The industry was given a chance to regulate itself voluntarily, but there was a patchy response to this,” says Mr Clark. “Now they need firm leadership and regulations from the government that force them to comply, and approval from outside the Advertising Standards Association (ASA).”

Authorities are now requiring rigorous proof of any health claim. The ASA, for example, has banned some Actimel TV advertising, claiming it was “misleading”, and the European Food Safety Authority required Danone to withdraw health claims about Actimel.

The CFC also launched a Junk-Free Checkouts campaign to remove junk food at supermarket tills and queuing aisles. This was initially met with resistance. However, earlier this year Lidl became the first UK supermarket group to comply with this request. Other major UK supermarkets have since followed suit. But this initiative has yet to be widely adopted by non-dedicated food retailers.