Microgrids are bringing power to the billion left without electricity

Around 1.1 billion people globally have no access to electricity, with 95 per cent in rural locations in sub-Saharan Africa and developing countries in Asia. However, the United Nations has set an ambitious sustainable development goal to ensure universal access to affordable, reliable and modern energy services by 2030.

And there’s a decentralised solution that could play a significant role in promoting greater democracy of power supply and bringing people out of poverty. Mini grids, or smaller capacity microgrids, are among a burgeoning supply of off-grid electrification solutions, alongside standalone home systems.

Global microgrid capacity is expected to grow from 1.4 gigawatts (GW) in 2015 to 7.6GW in 2024, according to Navigant Research, while decentralised renewables are the source of 6 per cent of new electricity access, the International Energy Agency reports.

“Microgrids democratise electricity delivery,” says Harish Hande, chief executive at the India-based not-for-profit SELCO Foundation, which has been replicating successful models of decentralised energy since launching in 2010 and reached more than half a million end-users to date. “A shift from waiting for energy to flow, to active generation and consumption of energy is important. A microgrid will not remove poverty, but is a powerful tool.”

Collaboration of financial institutions, innovative technology and communities is critical for scalability, he says, ultimately impacting on markers such as health, education and gender equality. “There is a perception the poor will not pay, so are high risk, but when we go to a new location, we take bankers from an existing successful area to do training,” Mr Hande explains. “Bankers listen to other bankers.”

The Indian government has recognised the microgrid market can spur socio-economic development in rural areas where the national grid has not extended. Its draft national policy promoting decentralised energy aims to establish at least 10,000 renewable-based micro and minigrid projects across the country.

Those ambitions are echoed at entrepreneur level by Oorja Development Solutions co-founders Clementine Chambon and Amit Saraogi, who launched their first minigrid in the northern state of Uttar Pradesh last summer. 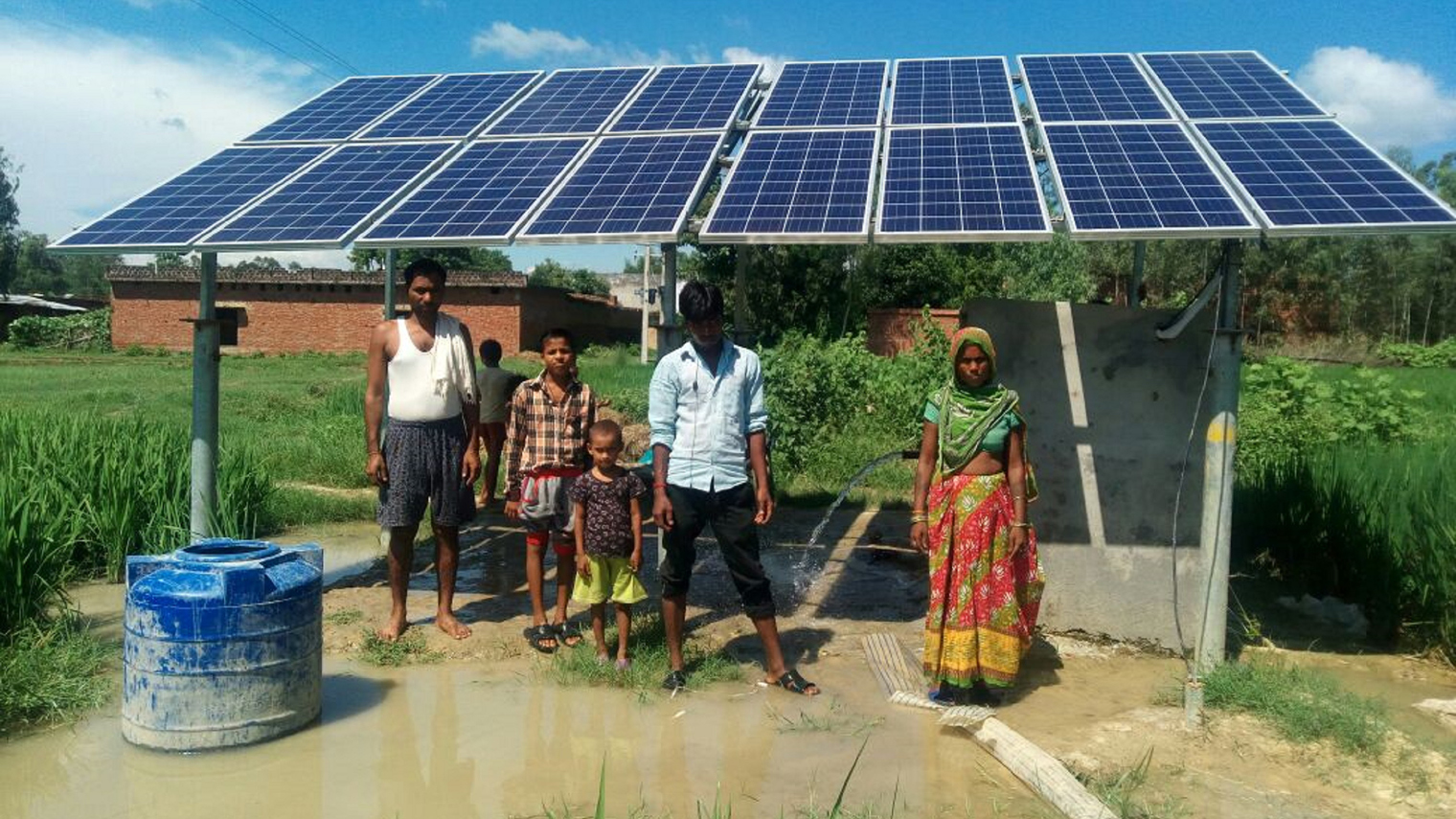 Oorja Development Solutions launched its first minigrid in the north Indian state of Uttar Pradesh last summer, powering up to 100 households and providing irrigation to farmers

Powering up to 100 households and providing irrigation to farmers in Sarvantara village, Ms Chambon says the socio-economic impact is evident, with solar-powered lighting displacing kerosene lamps and businesses able to earn around 50 per cent more from increased efficiency. “There is a realisation that decentralised energy is part of the solution, but the challenge is how to implement that at ground level,” she adds.

The pair plan to develop 250 minigrids over the next five years, although Mr Saraogi concedes that “navigating the policy environment can be a challenge”.

For Dr Philip Sandwell, researcher at the Grantham Institute – Climate Change and the Environment at Imperial College London, while government policy can be a catalyst in stimulating the sector, business buy-in is essential to innovation and scalability. “In general, the industry is driven by people who want to do good, but there is the business side of ensuring it is sustainable,” he points out. “In the past, we have been stuck in an aid-based model, but now it is about getting a sustainable return.”

In Nepal, challenges of geography and isolated communities, compounded by an energy crisis caused by floods and drought, have left a gap. While hydropower has typically been the energy source of choice, notably for the national grid, solar microgrids are an exciting prospect, says Gham Power general manager Anjal Niraula.

Energy cuts of up to 18 hours a day meant urban businesses incurred high costs of using back-up diesel generators, he says, creating a microgrid opportunity. “We realised we could do the same in rural areas where extension of the transmission line is not feasible or very expensive,” says Mr Niraula.

Gham Power is focusing on creating multiple clusters of three or four microgrids; its Khotang cluster, north east of Kathmandu, reaches 102 households and 87 businesses. It has proved most successful for productive uses, with local entrepreneurs increasing revenue, leading to wider economic benefits.

“Microgrids are misunderstood because there can be a focus on comparing cost on a kilowatt/hour basis and asking why the poorest are being supplied with expensive energy,” says Mr Niraula. “But they are displacing dirty energy and increasing revenue for local people, and no one has yet quantified that.”

The economic need for reliable energy was brought into sharp focus in Nigeria in 2016, when thousands of shops in Kano State’s Sabon Gari market, powered by diesel generators after disconnection from the national grid, were damaged by fire.

In the last month, Nigeria’s Rural Electrification Agency (REA) launched a project to switch four major markets and economic centres on to solar-powered minigrids. The first phase of 500 shops in Sabon Gari market was unveiled on February 7 and REA managing director Damilola Ogunbiyi says once completed it will be the “largest virtual power plant in Africa”.

“Our aim is to have 30 per cent of power supply from renewables by 2030, of which minigrids will play a significant role,” she adds.

Mobile payments and smart meters are among technologies improving scalability as microgrid developers look to Africa.

In Rwanda, MeshPower director Lukas Lukoschek employs 25 local women entrepreneurs as mobile money vendors working across 70 villages, selling top-up cards to add pay-as-you-go energy. “Our mantra is that it must be a cookie-cutter system for us to scale it up,” he says.

Meanwhile, after a minigrid pilot in Tanzania in 2016, multinational utility ENGIE replicated the model in three more locations and has another four in construction. It now has ambitions to develop thousands more minigrids and branch into up to five new countries this year.

While the opportunities are clear, the pathway to full global scalability is less well lit, warns Chris Tattersall, who leads the energy and resources sector at Deloitte in Switzerland.

“In terms of scalability and success, there are four things that need to be worked on: continued cost reduction of photovoltaic production; cheaper storage; a cost-effective, low-voltage smart grid with demand response and real-time management of electricity flows; and [who is] the orchestrator,” says Mr Tattersall. “Everyone in the industry is thinking about what business models will make decentralised energy successful in the future. No one yet has stumbled across the jackpot to roll it out.”