Think Britain doesn’t build cars anymore? Think again. This year it’s on track to build 1.6 million vehicles – more than 70 models from over 30 different manufacturers. By 2020, the UK should beat the 1972 record production high of 1.92 million cars, an increase in output of 50 per cent over 2011 recession-hit levels. Car production in Britain was hollowed out in the 1980s, but it has since been revived sufficiently to make the UK Europe’s third largest car producer.

Cars built in Britain are high value. The average sale price of a UK car is £20,900. More than three in four cars built here go overseas, 57.5 per cent to Europe. Britain exports cars to more than 100 countries globally, but Europe is by far its top trading partner. The next strongest destination for exports is the United States at less than 11 per cent, while China took 7 per cent of production volume in 2015. For every one UK-built car that went to China, more than eight went to the European Union, which is why Brexit has the industry worried.

Ahead of the June 23 referendum vote, the Society of Motor Manufacturers and Traders (SMMT) revealed that more than three-quarters of members, the automotive industry trade, favoured remaining in the EU. “We want this success to continue rather than jeopardise it by increasing costs, making our trading relationships uncertain and creating new barriers to our single biggest and most important market, Europe,” said SMMT chief executive Mike Hawes.

Brexit, however, now seems a reality. And the industry is uneasy. “I don’t like the uncertainty at the moment,” says Kenneth Gregor, chief financial officer of Jaguar Land Rover. He is not alone. Few automotive companies are, at this stage, willing to comment on Brexit. “At Honda, we’re not going to tell the UK government what to do,” says its UK managing director Philip Crossman. But most agree there are certain imperatives to ensure the UK automotive industry continues to thrive: tariff-free trade, unrestricted access to the European workforce and commonality of regulations.

The SMMT is looking to prime minister Theresa May to deliver this. “Government must now maintain economic stability and secure a deal with the EU which safeguards UK automotive interests,” says Mr Hawes.

The concern is not restricted to the carmakers. The UK automotive industry accounts for nearly £70 billion in turnover and more than £15 billion in value added. It employs 800,000 people and accounts for 11.8 per cent of total UK exports. Any reversal in fortunes for the industry would have nationwide implications.

Effects could stretch Europe-wide. Germany built 5.7 million cars in 2015 and exported 810,000 of them – over 14 per cent – to the UK, more than any other country in the world. Most of these are high-value models. The German automotive industry also has more than 100 facilities in the UK.

It’s common for only a third of parts in a British-built car to be UK-sourced. Even where manufacturers would like to source more in the UK, close to their manufacturing sites, they find the supply base is present. “Until recently, we were sourcing plastic fuel tanks from overseas,” according to a Vauxhall spokesperson.

Italy serves as a sober warning of the risks when an automotive industry loses competitiveness. It built two million cars a year 20 years ago. Today, it builds just 500,000. “If the UK doesn’t want to suffer the same fate as Italy’s car industry, it must be concerned to retain full access to the single market,” warns Matthias Wissmann, president of Germany’s VDA automotive industry association, the equivalent to the SMMT.

Winning the contract to build a new model is a competitive process within car companies. Since the recession, UK automotive has secured win after win. The most recent success was production of the new Honda Civic in Swindon – it will become the sole global production hub for the new five-door Civic. Some £200 million was invested as part of this, taking Honda’s total British investment over the past 30 years to £2.2 billion. 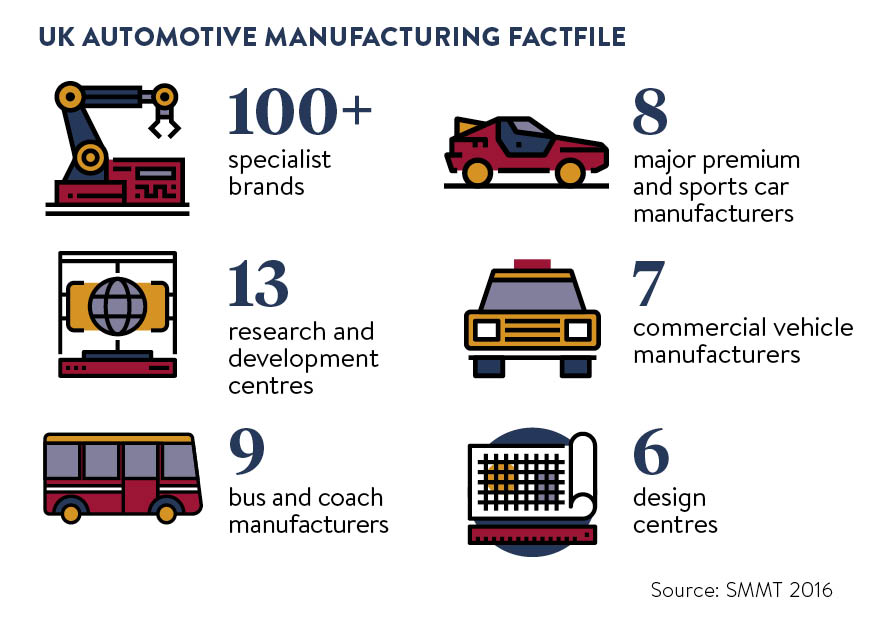 An unfavourable hard Brexit would not see manufacturers immediately terminating contracts and closing plants, but it would make it less likely that new contracts are won. Britain would lose competitiveness and this would make the tenders of UK facilities less appealing alongside alternatives. As with Italy, the decline could be gradual, but painful.

Despite these risks, the automotive industry has since received a confidence boost courtesy of Nissan. It recently confirmed a new Qashqai will be built in Sunderland from 2019, after the UK’s expected withdrawal from the EU – and as an added bonus, a new X-Trail SUV will also be constructed there from the first time. The current Qashqai is a UK top-five best seller and only Jaguar Land Rover makes more cars in the UK than Nissan. The announcement is thus very significant.

It came after Nissan chairman and chief executive Carlos Ghosn met prime minister Theresa May at 10 Downing Street in October. It is not clear what assurances, if any, were made to Nissan should any post-Brexit barriers to inhibit trade or undermine competitiveness develop. But Nissan seems confident there will be no medium-term penalties to producing cars in Britain and that the UK’s competitiveness will not be damaged post-Brexit. As other new model contracts approach renewal, the rest of the automotive industry may now be seeking similar assurances.