Brendan Kennedy doesn’t look like a drug dealer. He strides into the Baker Street café wearing an expensive suit with the relaxed air of a man who is doing rather well for himself. He doesn’t even sound like a drug dealer. Once the San Francisco businessman has ordered a mineral water, he talks almost exclusively in corporate jargon.

But his firm, Privateer Holdings, is no normal company. It sells medical and recreational cannabis, and Kennedy has big aspirations for it. He wants to turn it into the Starbucks of the cannabis world: a strong global brand with a loyal clientele.

“People are looking for a product which is safe, which is properly labelled, and which is consistent from experience to experience,” he says, as if he were talking about a new range of soft drinks.

His corporate brochure looks like the promotional material for an upmarket London coffee outlet. On one of the pages there are soft-focus photographs of plastic baggies with buds of cannabis in them. Across the top of each bag is professional-looking branding: The Marley Green, Red, Gold and Black range. 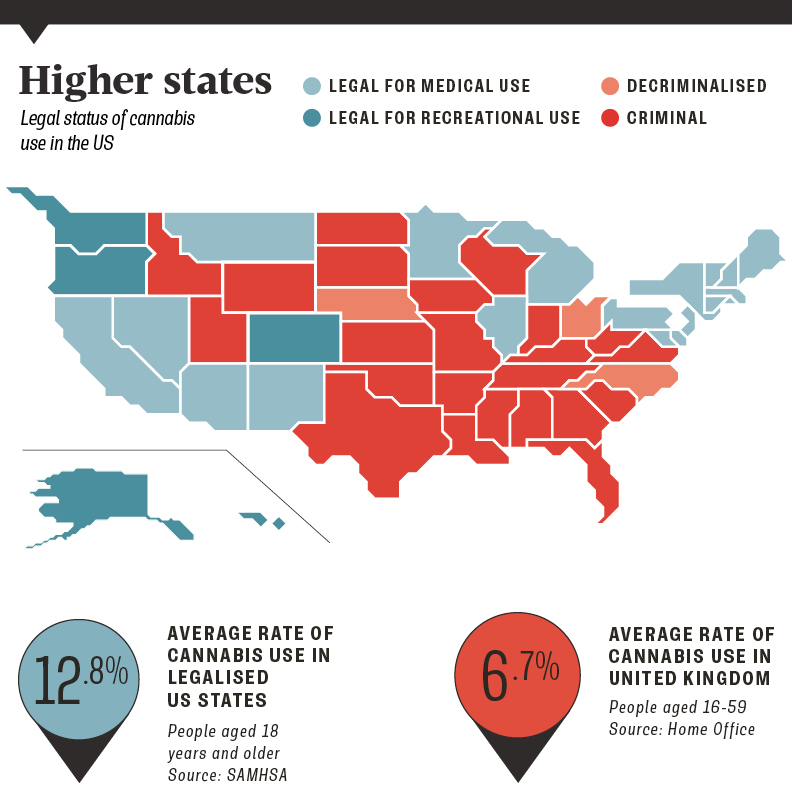 It is a strange combination: A counter-cultural product with a polished chief executive. But it seems to be working. Kennedy raised $7 million (£4.9 million) in his first round of investment, $75 million in the second and an additional $100 million this year. “Individuals with skin in the game are reading the signs and thinking: ‘Let’s get in on the ground floor of an industry that’s about to become legal’,” he says.

That sudden injection of entrepreneur cash is changing cannabis culture. The process started years ago, when cannabis was legalised for medical use in California. But it was full legalisation in Washington and Colorado in 2012 which kicked everything up a gear.

“All the high-tech cannabis stuff came out of the medical market,” Steve Rolles, senior policy analyst at the Transform Drug Policy Foundation, says.

“The fact it was legal provided space for people to research and develop products. And there was an obvious opportunity to make money there. There’s a free-market driver of new products and technology.”

It has euphoric and psychedelic effects. CBD does a bit of that too, but mostly it calms and relaxes the user. Until now, weed growers have been using agricultural techniques to control these two ingredients – basically by breeding certain strains together. That is messy. Each bud could contain different proportions. By using butane extraction to turn cannabis herbs into oil, scientists were able to manipulate the ratios with a very high degree of control.

Now, cannabis oil can be tailored for people’s individual requirements. Someone consuming it for medical reasons will want something with a high CBD ratio.

Kennedy’s team, for instance, are currently working on a treatment for childhood epilepsy which would have just one part THC to 50 parts CBD; for heavy users or those keen to experiment with stronger psychedelic experiences, the extraction process also offers probably the most powerful version of cannabis ever produced.

‘Shatter’ and ‘wax’, for instance, are highly potent concentrates. Users put a tiny dab of them on the end of a water bong and then super-heat it to release the vapour. These concentrates can have up to 90 per cent THC — compared to street cannabis, which has about 15 per cent.

“They’re very strong,” Rolles says. “And you have a dosage issue, because one hit of one of these products could be more than some people want to take.”

Cannabis oil has another very significant advantage: It can be put into a standard e-cigarette vape pen, meaning users are finally able to get high in public without having to worry about being arrested.

Vaping’s health benefits are part of that trend. Being able to get high without also having to breathe in lots of dangerous carcinogens is leading to a new lease of life for the drug, particularly in the health-conscious US. Celebrities, including Whoopi Goldberg and Sarah Silverman, have even been brandishing their cannabis vape pens on the red carpet at award ceremonies.

From the substance itself to the way it is taken, by whom and where, money and technology have disrupted the cannabis status quo. No one is quite sure what it will look like when everything settles down.

“It’s a wide open space,” Kennedy says, taking another sip from his mineral water. “Exactly the kind of opportunity I was looking for. My obit is going to say: ‘He built brands that helped end prohibition across the world’.”