The landscape of DIY facials is changing fast. The techniques of skilled beauticians and aesthetic practitioners previously confined to the clinic are being brought home thanks to advanced technology. From Clarisonic’s pioneering deep cleansing device to the Iluminage anti-ageing laser, exceptional complexion enhancements are now quite literally at our fingertips.

Persistence Market Research says the global beauty device market is worth $19.4 billion predicting growth of almost 19 per cent by 2020, while the Kline Group consultancy say it’s expected Europe will outpace the United States in terms of gadgetry pick-up.

Harrods have championed DIY beauty devices in its Apothecary since 2011, with beauty divisional merchandise manager Mia Collins reporting they have seen 15 per cent growth in a year and, since 2012, the category has doubled. “You just have to look towards retailers such as Net-a-Porter, QVC, Selfridges and Space NK all expanding their tool ranges to see that the industry is betting on the potential of this category,” adds Ms Buchanan.

It’s a recent phenomenon. While home hair removal has long been the norm, Clarisonic brought cleansing devices into the beauty consciousness in 2004. Snapped up by L’Oréal in 2011, variants push serums into the skin too and the group has its own skincare line, Sonic Radiance. Bliss’s 2011 Pore-Fector Gadget uses sonic vibrations for a deep clean, selling one a day, while the Olay Regenerist 3-Point Super Cleansing System sold one every three minutes during both its UK and US launches.

Customers demand proof and clinical trials show that the Olay system, for example, is four times more effective at cleaning the skin than manual cleansing. Clarisonic last year presented a study saying it could remove up to 30 times more of the airborne pollutants that speed up skin ageing.

“The speed of development in electronics has raised the bar for acceptance,” explains Dr Tom Mammone, executive director for skin physiology and pharmacology for Clinique Worldwide, which has the Sonic System Purifying Cleansing Brush, the market bestseller at John Lewis. “Technology is spilling over into cosmetics so customer expectation is for lower cost and elevated performance. Ten years ago the efficacy of beauty devices wouldn’t have come close to treatments in a dermatologist’s office, but today it’s amazing to see just how comparable the results can be,” he says.

Price is playing a big factor in moving the cleansing device market forward, ensuring the success of lower entry level launches, such as the Olay system at £39.99 in comparison to Clarisonic at £155. Beyond cleansing, however, are new, innovative anti-ageing devices boasting the kind of light emitting diode (LED), ultrasound and laser technology that offer professional results which, while not as powerful as those produced from an appointment with an aesthetician, are proving popular because they have the safety seal of approval by the US Food and Drug Administration.

A study by HoMedics NEWA showed an 88 per cent improvement in wrinkles after 12 weeks, while CACI, long noted for their salon facial success, transported their micro-current skin firming technology into an at-home system, Microlift, in 2013. “We see them as working in tandem rather than competing, in the same way that, for the best results, you’ll see a dentist, but also use a sonic toothbrush,” says Dean Nathanson, CACI International managing director.

Diversity is galloping the segment forward. Out in July, Clinique is offering options of anti-acne and massage heads devised to work with Sculptwear Contouring Massage cream to be applied sonically for maximum effect. While hardly hand-held, a study of the Dyson Humidifier has shown that having the correct humidity in a room alleviates dehydrated, rough skin that further causes fine lines.

Expect to see smart technology playing a greater role in the future too. The Iluminage laser already records an account of usage and skin progress that can be uploaded to an online tracker. “Over the next five years, smart technology will become evermore embedded in the beauty ecosystem, defining how consumers interact with ranges and creating new levels of technologically enhanced product functionality,” The Future Laboratory’s Ms Buchanan concludes. 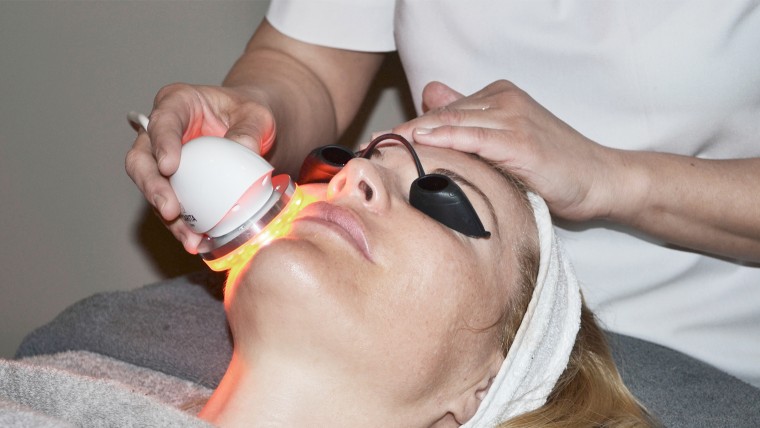 With the growth of at-home treatments, more women are being tempted into salons to experience the professional touch.

“Home devices have inspired women to come into the salon to try professional treatments,” says CACI International’s Dean Nathanson. “With clients in mind and such wonderful advancements in technology, we’re developing the next generation of machines that combine multiple benefits in one. Previously you would have to have separate treatments for blemishes, tightening and lifting, but we will be able to combine them into a simple single session.”

This multi-tasking and personalised approach to beauty benefits seems a no-brainer now that the technology is there to support it. Carita Cintetic Lift Expert was introduced as a world first last year and mixes the lifting, toning and firming benefits of micro-currents, ultrasound and LED light therapy into an hour. And the Smart Scan technology behind the Venus Viva facial treatment allows for customisation too, with aestheticians able to micro-manage the intensity of the radio frequency to tackle issues from sagging skin to breakouts and large pores in one shot.

Earlier this year, South Korean brand Ledgen presented their Eclat LED light therapy device, claiming it can repair damaged skin cells, helping to prevent signs of ageing. “They see this as a salon service, but you can easily see how the technology could be developed for home devices too,” predicts Victoria Buchanan, visual trends analyst at The Future Laboratory.