From airport extensions to nuclear plants and multi-use redevelopments, we chart the fortunes of some of the country’s most ambitious infrastructure projects

After being struck by delays and cost overruns, Crossrail is finally close to completion. The first test run of close to 2,000 passengers took place on the Elizabeth line on Sunday, taking people between Paddington in the West of the city to Liverpool Street station in roughly 10 minutes.

The first phase of the underground route will open this summer. Once stage three is completed in 2023, it will take travellers from Reading and Heathrow Airport in the west to Shenfield in Essex and Abbey Wood in southeast London. The finished route will go through a total of 41 stations – ten of which are new – including Bond Street, Tottenham Court Road, Farringdon and Canary Wharf.

Crossrail was originally approved in 2007 and construction began in 2009, but the Covid-19 pandemic caused work to be paused for several months in 2020. The project’s final costs are expected to come in at roughly £18.9bn. That means it’s £4bn over budget, with the first trains running four years later than expected.

Tunnelling progressed at an average pace of 38 metres a day to complete the 42km of new tunnels that make up the Elizabeth line. At the height of construction, Crossrail was the largest infrastructure project in Europe. Crossrail chief executive Mark Wild claims that, when finished, it will be “the most advanced railway” on the continent too.

The new British Rail Class 345 trains were built by Bombardier Transportation for use on the Crossrail network; they are twice the length of regular tube trains and can carry 1,500 passengers at a time. An estimated 200 million passengers will be served by the new underground line each year.

This was expected to earn Transport for London (TfL) approximately £500m per year in revenues in 2022/23 and over £1bn per year from 2024/25. However, the long-term impact of the pandemic on working patterns and use of public transport has caused TfL to revise these estimates to less than 60% of the pre-pandemic hopes. 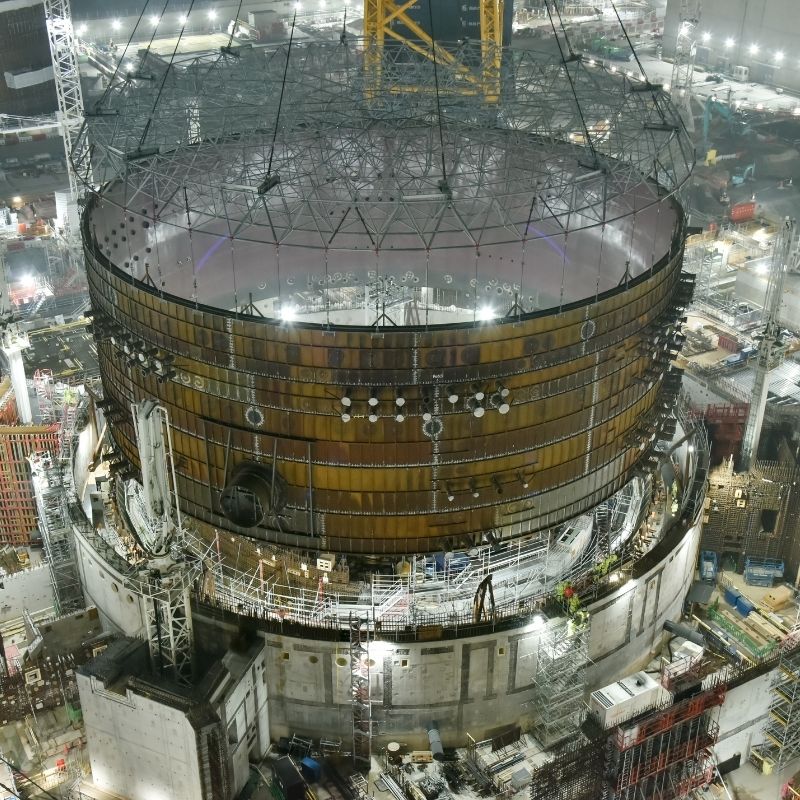 Hinkley Point C was one of eight new nuclear power stations announced by the government in 2010 and is the only one under construction. That means it will be the first new nuclear plant to open in the country in more than 20 years.

Construction of the project recently gained fresh impetus, with the energy price crisis and Russian invasion of Ukraine causing the UK government to review its reliance on imported fossil fuels. The decommissioning of Hinkley Point B, which is set to begin in July this year, adds to the project’s importance.

The latest element of construction involved lifting a 347-tonne liner steel ring onto the reactor, which made the building 17 metres taller. This was performed by ‘Big Carl’, a 250-metre tall super crane and the largest crane in the world.

More than 22,000 people have worked on the erection of the new nuclear power station since shovel was first put to soil in September 2016. Work on the infrastructure project continued throughout the pandemic, after a number of social distancing and safety measures were put in place.

“Our ability to maintain progress in such tough circumstances is a testament to the commitment of the workforce and our suppliers across Britain and the world,” said Hinkley Point C managing director Stuart Crooks. The precision involved in building the site’s nuclear reactor units is like “watchmaking on an industrial scale”, he said.

The infrastructure project has met some delays along the way. Electricity generation from unit 1 is expected in June 2026 at the earliest, a year later than the original 2025 date. This has also increased the estimated cost of the project by £500m, taking the total to £23bn.

French energy firm EDF remains the majority investor in Hinkley Point C, with the Chinese state-owned China General Nuclear (CGN) paying £6bn for a 33% stake. CGN is expected to remain a partner despite the British government’s decision to reduce China’s involvement in UK infrastructure projects. The deterioration of diplomatic relations between the two countries has seen the government seek new investors for its other nuclear projects, including Sizewell C. 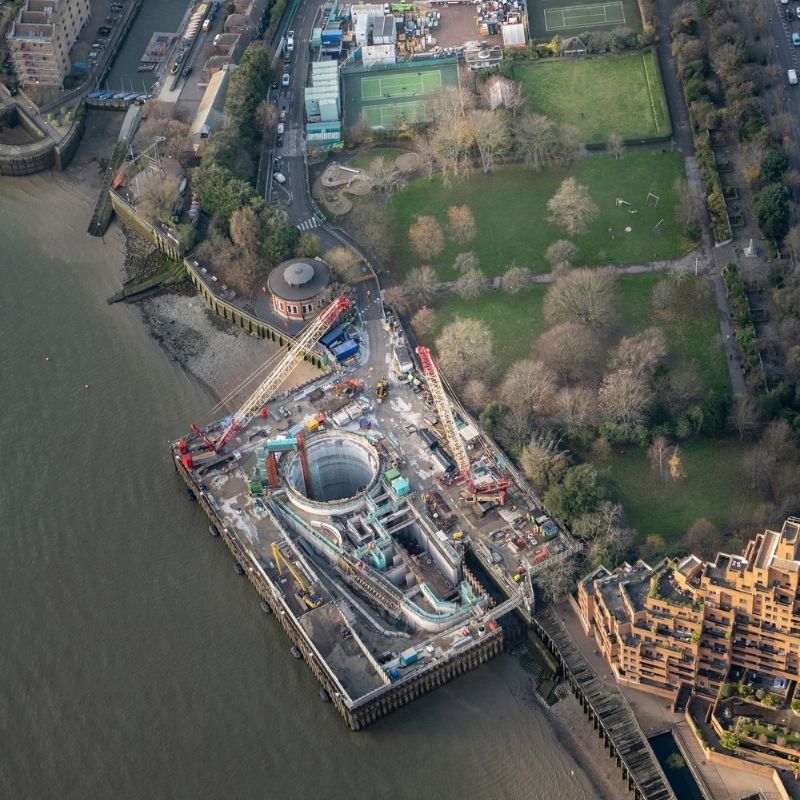 Completion date: first half of 2025

Due to be completed in 2025, London’s new super sewer is designed to capture more than 95% of the sewage spills that enter the river Thames. The city’s current sewage system mostly relies on Victorian sewers, which were first built in the late 19th century.

Although the current system has expanded alongside London’s population, the infrastructure is overloaded, meaning that in a typical year 40 million square metres of untreated sewage are dumped into the Thames. The infrastructure project will create an additional 1.6 million cubic metres of additional storage, which it is hoped will dramatically improve the water quality in the capital’s river and make it a healthier environment for wildlife.

The Covid-19 pandemic caused works to be delayed by nine months, incurring additional costs of £233m. The most recent review of the Tideway project, from September 2021, estimated a cost of £4.2bn, with an estimated annual cost of £20 to £25m, which will be covered by Thames Water billpayers.

Construction began in 2016 and is taking place at 24 sites across London. These will eventually be connected by a 25km tunnel below the river that stretches from Acton in west London to Stratford in the east. These underground works are expected to be completed this year and the excavated tunnels will be large enough to fit three double-decker buses side by side.

As part of the infrastructure project, seven new embankment areas are being constructed, including at Chelsea, Blackfriars and Victoria Embankment. The foreshore structure at Chelsea, for example, will include an area for the public to walk on and display artwork.

“It is hugely exciting to see these pieces of embankment taking shape and we look forward to when Londoners and visitors can enjoy these new spaces and get closer to the River Thames,” said Andy Mitchell, Tideway CEO. “With the project due for completion in 2025, we all look forward to the benefits of a cleaner, healthier river Thames.” 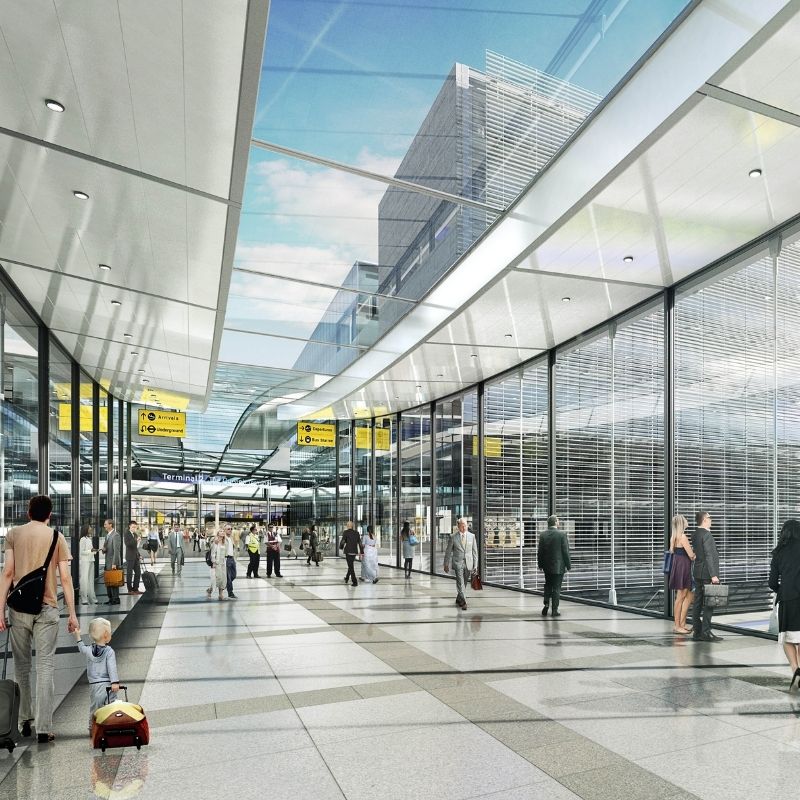 The construction of a third runway at London’s Heathrow airport has been in limbo since plans were first approved by Gordon Brown’s Labour government in 2009. As Europe’s busiest airport before the pandemic and the only hub airport in the UK, the economic case for the expansion is that the addition of a third runway will generate an estimated £61bn in economic growth and create up to 77,000 local jobs by 2030.

The proposed expansion includes the construction of a new terminal building and new public transport interchanges. It will increase capacity for an additional 260,000 flights per year.

However, Heathrow’s plans have consistently been opposed by environmental groups. After being cancelled by the coalition government in 2010, it was adopted as central government policy once more in 2016. The proposed third runway was successfully challenged in the court of appeal in February 2020 by environmental campaign groups, who attested that the expansion failed to take adequate account of Britain’s legally binding climate commitments to reach net zero by 2050, made as part of the 2015 Paris Agreement.

This ruling was eventually overturned by the Supreme Court in December 2020, after Heathrow argued that the expansion would be built in accordance with the government’s climate change policy. The reversal of the decision means Heathrow can now apply for planning permission for the project.

Amid the legal challenges and questions over its environmental impact, the pandemic presented further issues for the project. Travel restrictions caused passenger numbers to plummet to 19.4 million in 2021 and the airport has incurred losses of £3.8bn over the course of the Covid-19 crisis.

The airline industry is expected to see a significant recovery this year as the number of holidaymakers continues its return to pre-pandemic levels. Heathrow chief executive John Holland-Kaye recently confirmed to the Financial Times that the increase in passenger numbers means the airport’s expansion is now “back on the table”.

Under the 2015 plan submitted to the Airports Commission, the total cost of the project was estimated to be £14bn. If the plan goes ahead now, it’s likely to cost even more. 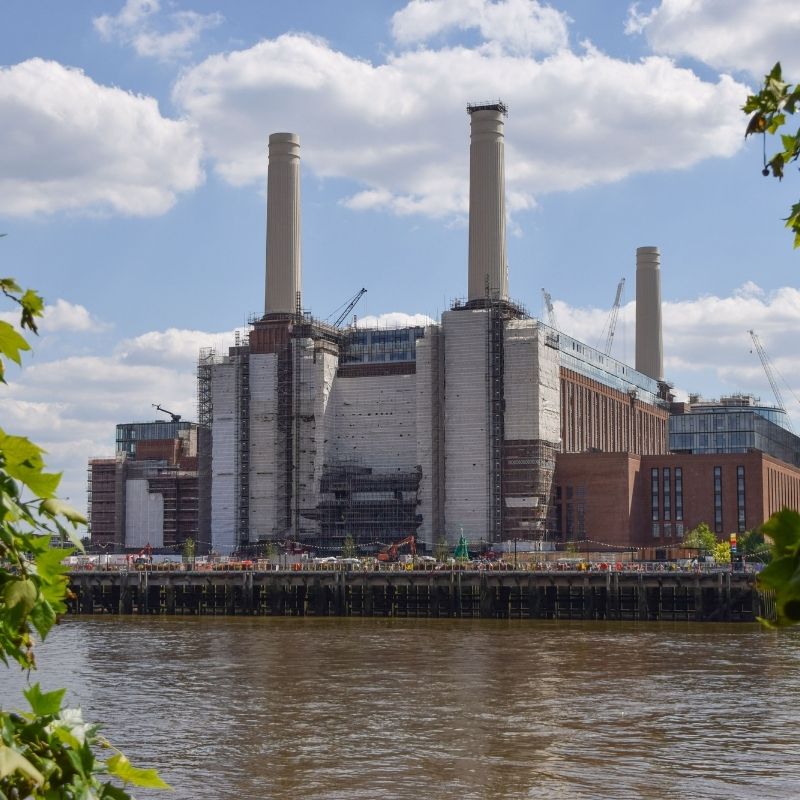 The redevelopment of Battersea’s Grade II-listed power station is nearing completion. Led by a consortium of Malaysian investors, the £9bn construction project began in 2013. Once finished, the 42-acre brownfield site on the bank of the river Thames will have been transformed into residential units, office space, shops, bars and restaurants.

A number of redevelopment plans were suggested for the power plant’s redevelopment following its closure in 1975. At one point an indoor theme park was proposed for the space, while Chelsea football club also contemplated constructing a new, purpose-built stadium on the site.

The first phase of the redevelopment, the Circus West Village, was completed in 2017. This included the construction of a number of flats, while it also features bars, restaurants and leisure facilities, including a small cinema and theatre. An extension of the Northern line connected Battersea power station to London’s underground network after opening last year.

The next phase of the regeneration will see the iconic power station building open to the public. Once finished, it will house Apple’s London campus. The US tech giant will occupy six floors of the brick power station, providing space for 1,400 employees.

Beneath the office space, there will be a number of shops and a foodhall, while the old turbine halls will become a 2000-capacity event venue. The mixed-use development will feature 20,000 new homes, 250 shops, cafes and restaurants, 19 acres of public space and a panoramic viewing platform at the top of one of the power station’s four chimneys.