More people are now saving for their old age as auto-enrolment into a pension scheme takes effect, but there remain potential potholes along the road to a comfortable retirement

The apparent dry and dusty area of pensions may not have hit the highs and lows associated with the Brexit vote, but it has been an area of experimentation, even revolution, in recent years.

Over the last decade, pensions have become one of the most high-profile financial matters to dominate headlines and government policy because our population is living longer and placing a greater strain on government spending.

Yet membership of workplace pensions was in rapid and terminal decline, and so there was no mechanism to relieve the burden from the exchequer. The Pensions Act 1995 offered members far greater protections against another Maxwell scandal, but imposed a far stricter regime on employers.

This burden, combined with volatile investment markets, made it more difficult for employers to fund their pensions promise.

As a result, we have seen the closure of most private sector defined benefit (DB) schemes in favour of a more flexible, less costly alternative structure in defined contribution (DC).

The trouble with pension schemes is that relatively few employees choose to join them, either because they don’t think about them or believe there is time enough in the future to save for retirement.

The answer was for the government to impose a mechanism that would require an employee actively to opt out of and so auto-enrolment (AE) was launched in October 2012.

Since then, more than six million UK workers are now saving for their retirement.

It is important to remember that AE is not a one-time compliance matter for employers, buta process they must undertake every time they employ someone or run the payroll.

Freedom at a cost

The Pension Regulator has made clear it believes there are too many small DC pension funds that offer poor value to members and wishes to see the many thousands of small schemes consolidated into a far smaller number.

Though AE is one of the largest social engineering projects undertaken by any government since the NHS, the Cameron administration sought to revolutionise the relationship between saver and saving.

Then-chancellor George Osborne announced in the 2014 Budget measures that would allow pension savers over the age of 55 to take as much or as little from their funds as they wished.

There are limitations on withdrawing funds from DB schemes – you must appoint a financial adviser to advise any transfer – but these new freedoms provide unprecedented access to pension pots. 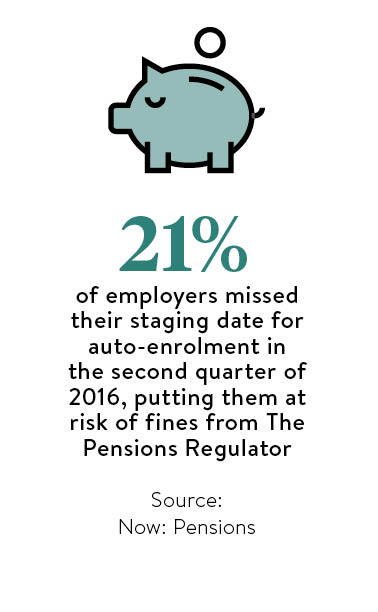 They may now be passed on to beneficiaries and so, for the first time, pensions can be considered an estate planning tool.

The reforms were immediately popular, satisfying the demands of those investors whodidn’t wish to buy an annuity and felt limited by income drawdown products.

But there is an object lesson about consumers being careful of what they wish for. Many consumers failed to realise the potential effect of withdrawing large sums of money from their pension might have on their income tax liability or even social security benefits, not to mention the impact on future earnings from a smaller fund.

Those with annuity products were also given an option to sell on their pension in a secondary market which is still under construction. This will be a boon especially to those who have contracted illnesses that will shorten their lives, but consumers must anticipate that freedom from their annuity will come at a cost.

The reforms also have major implications for DC workplace pension funds, too. The vast majority of scheme members – more than 95 per cent – are in the default investment strategy and DC schemes used to assume, not unreasonably, that most members would take an annuity at retirement.

They would then structure the “glide path” to retirement to transfer the fund progressively into less risky assets such as cash and bonds. Under freedom and choice that decision cannot be made with any great certainty and if a member wishes to use draw-down, but finds their fund has been moved into cash and bonds, they will face an expensive process to reinstate their portfolio.

DC scheme trustees and employers have reappraised their approach to the glide path of the default fund. Instead of changing their glide path, many have instead committed to greater levels of engagement from an earlier age.

Consumers have more choice than ever over how to access their pension savings. The difference, which is the greatest change, is that they must now take full responsibility for it.

This will be further complicated for those under 40 with a lifetime ISA as they choose whether to save for a house, into the ISA or for their pension.

The experts say they should always take the employer contribution first, but it remains to be seen whether they will. They are certainly unlikely to take advice, yet advice or at least tailored guidance is desperately required by those seeking to make use of the freedoms.

Though tax relief has been retained, it is fast becoming an individual taxpayer issue. During benign economic times, this may not be such a strain, but in the ever-changing world in which we live it is essential employees engage with their benefits if they wish to avoid any nasty surprises from the taxman.