It is dark outside one of Paris’s public pools on a Friday evening in late October, and the last of the swimmers are leaving. They may not suspect that the pool does not, in fact, close at 9pm, despite what it says on its official website, but remains open for the Paris Naturist Association, which uses the facilities three times a week, in the nude.

France is the world’s leading destination for naturists and home to two million of them, meaning one out of every five naked sunbathers in the world is likely to be French. There’s even a word in French for naked rambling: randonues, a combination of randonnée – hike – and nu – naked. One of Paris’s most popular music festivals featured a stand promoting naturism for the first time this year and a restaurant with strictly minimal dress attire is slated to open in the capital soon. The city has also recently announced plans for a naked-friendly public park.

“Naturism is on the rise,” David Belliard, the co-chair of the ecologist group that proposed the nudist park says, after lawmakers voted on the project in late September. Deputy mayor Bruno Julliard told national radio that he approved of the project, and that the area may be opened in one of the two large parks flanking the city, the Bois de Vincennes or the Bois de Boulogne, by next summer.

Meanwhile, the Paris Naturist Association, or ANP, says the events it organises, like naked bowling and pizza night, are increasingly overcrowded. “There’s a renewal within our club: we are seeing more and more young members. We’re worried about fitting everyone in and we’ve started looking for a bigger pool,” says Laurent Charrou, the organisation’s spokesman.

And yet the movement is also in the grips of a generational crisis. Two young women, first-timers, sit on the bench by the Parisian pool, waiting to be let in. “Are you here with the ANP?” asks the middle-aged man who greets them. When one of the women nods, he pumps the air, as though he’s just won a prize. He explains: there have been so few women lately, he’s glad they’re here. Inside, most of the swimmers, sporting nothing but swim caps and armbands, are male.

According to Yves Leclerc, vice-president of the French naturist federation, a new age of prudishness has swept over the country over the past few decades. Fewer women are going topless on French beaches, and even fewer are joining the ranks of skinny-dippers.

“Peddlers used to sell bikini bottoms only on beaches, back in the day,” says Leclerc, naked on the other end of the line when Raconteur called him for this article.

It’s a way of life. People in the naturist community accept and respect each other for who they are. It strips away all social barriers and allows people to be much more open

Only 17 per cent of French people polled in a 2015 survey said they would try or had tried sunbathing in the nude. Compare this to the third of Americans who answered yes to a similar question in the same year and it looks like the French are surprisingly shy. The same survey found that only 13 per cent of French women would be comfortable taking their clothes off on a naturist beach, compared with 23 per cent of men asked.

The clearest deterrent is the risk factor, according to Leclerc. Especially with social media and smartphones, women are concerned about ending up on the internet and potentially facing complications at their jobs.

Marie Breton, in her early fifties, does not have to worry about this problem. Her job at the reception desk of the nudist colony Aphrodite Village in southern France actually encourages her to be naked full time.

Breton has been living and working at the colony for 15 years and for her, it’s not just about taking off your clothes. “It’s a way of life. People in the naturist community accept and respect each other for who they are. It strips away all social barriers,” she says, “and allows people to be much more open.”

And yet the newer generation is less interested in the holistic ideology behind the movement or in signing up to be card-carrying members of any organisation. Smaller nudist clubs have been closing around the country at a rate of two or three each year. The larger, more expensive ones remain, but there has been a 30-40 per cent price hike for the right to take off your clothes. The new guard of nudists see the practice as something punctual and refreshing, a new way of taking a break from their busy, clothed lives.

“It’s more of a holiday thing,” Beth Jervis, a 30-year-old British actress and expat says. She discovered naturism several years ago when she hurt her knee and instead of going on a hike as planned, joined acquaintances at a resort along the Atlantic coast. Jervis used to play in the Rocky Horror Picture Show, which involved getting up in front of an audience in nothing but her underwear. She says she got comfortable fairly fast.

“When naturism comes up in conversation, it’s usually in the form of a joke,” Jervis says. “Most of the people you talk to have never seriously considered it. But once you get talking, they’re very curious.”

In France, where swimwear fashion was an explosive topic on major broadcast networks this summer, stripping down to the bare bones sends a potent message. This year, many coastal towns have banned burkinis, the full-body swimsuit preferred by some Muslim women. The bans sparked outrage domestically as well as abroad. 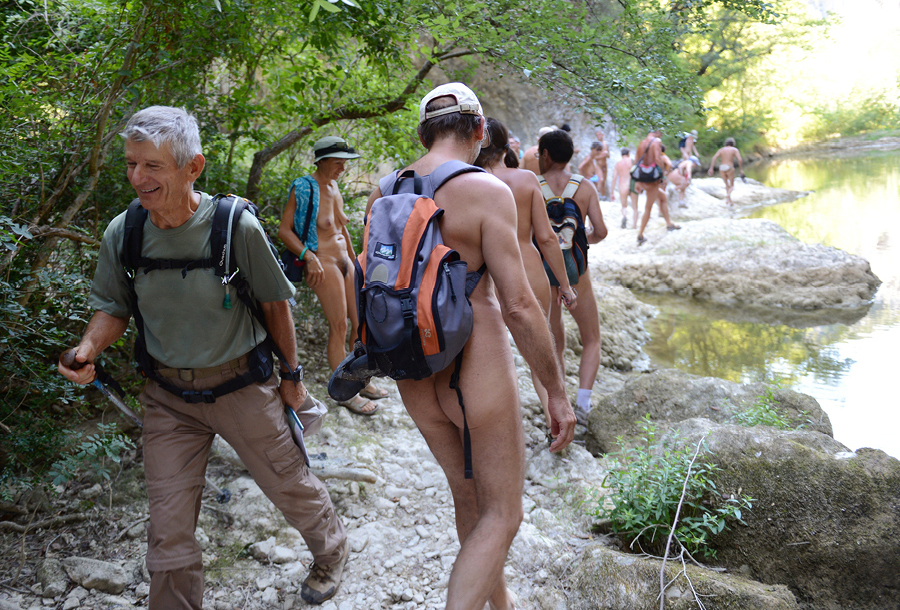 In this context, has baring all become more politically charged? Jacques Frimon certainly believes so. His group, the Association for the Promotion of Naturism in Liberty, organises nude hikes and generally promotes nudity outside of officially sanctioned areas. Fundamentalist Muslims may find an unlikely ally in him.

“We consider that the state has no right to legislate what people should or should not wear,” Frimon says. “We support [Muslim women’s] freedom of choice. It’s stupid to protect freedom by restraining it.”

Frimon’s organisation also supports Femen, a feminist group that uses breast-baring in public to attract media attention. The group chose to headquarter in Paris when fleeing from authorities in Ukraine in 2012. “Being naked at a protest means you have nothing to lose, and it frightens the authorities. It’s dangerous,” he says, with some degree of glee.

Naturists like Frimon have been pushing for legislators to clarify what they mean by indecent exposure. “The law confuses nudity and sexuality, which is absurd, because nudism desexualises the body entirely,” he says. “Even the police are confused.”

He tells the story of being surrounded by policemen while on a naked hike with women and children, only to be released after the officers checked in with their superior. A person who strips down in public could be fined up to €15,000 (£13,360) and sentenced to a year in prison.

This is why a public park in Paris would make such a difference, according to naturists in the capital. The idea finally gained traction after they made a nude appearance at the popular music festival, Fête de l’Humanité, attended by 600,000 people this autumn. The stunt was a raging success.

“It’s the first time the naturist movement dares to participate in a semi-political event,” says body painter and 32-year-old artist Julien Wolga, referring to the fact that the festival is also a fundraiser for the communist-friendly daily L’Humanité. “It was a huge, courageous step,” Wolga says, “and I think there will be many more opportunities like this in the future.”

Leclerc, also present at the event, reports being surprised at the enthusiasm with which they were welcomed. “Some people came running towards our stand,” says Leclerc, “taking off their clothes and shouting ‘Liberté!‘”