The mobile industry has scaled dramatically over the last decade. At the end of 2003, there were a little over one billion unique subscribers, meaning that just under one in six people had subscribed to a mobile service. By the end of 2013, this figure had increased to 3.4 billion unique subscribers, equivalent to just under half the global population at that time and accounting for 6.9 billion SIM connections.

While we’re now seeing a slowing of subscriber and connections growth rates in developed markets, there is significant untapped potential in developing markets, which are forecast to add nearly one billion unique mobile subscribers by 2020. In developed markets, there is a technology shift underway, with an increasing proportion of mobile connections now on higher speed 3G and 4G networks; globally this proportion is set to rise from a third at the end of 2013 to two-thirds by 2020. The number of operators that have commercially launched LTE (long-term evolution) networks is forecast to almost double over the next three years to reach close to 600 operators in 156 countries across the world, covering 63 per cent of the global population by 2020. 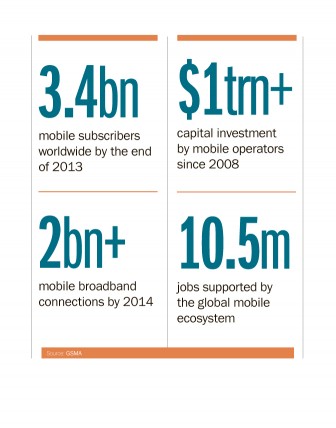 Indeed, the move to higher speed networks is accelerating; the number of mobile broadband connections has grown tenfold from just over 200 million in 2008 to well over two billion by 2013. Growth should remain strong, driven by rising smartphone penetration, with about four billion mobile broadband connections expected to be added globally in the period to 2020. Higher speed networks and more advanced devices are enabling the growth of data-hungry applications, such as video streaming, internet browsing and file downloads. At a global level, the rate of growth in data traffic is likely to far outstrip the growth in mobile connections.

The transformative effect of mobile has been made possible by significant capital investment by mobile operators over recent years, totalling more than $1 trillion in the last six years. Investment has been focused on both improving network coverage and facilitating the growth in mobile broadband connections. Total investments by the operators are expected to increase to accommodate the strong forecast growth in global data traffic, amounting to $1.7 trillion to 2020.

Mobile has become a cornerstone of the global economy, both as an industry in its own right and as an enabler of opportunities in other sectors

Given this, it’s no surprise that mobile has become a cornerstone of the global economy, both as an industry in its own right and as an enabler of opportunities in other sectors. The mobile industry, both directly and indirectly, contributed around 3.6 per cent of global gross domestic product (GDP) in 2013, equivalent to more than $2.4 trillion. This figure is expected to increase to 5.1 per cent of global GDP by 2020. In addition, the mobile ecosystem directly supports 10.5 million jobs across the world, while contributing more than $336 billion in public funding in 2013, even before considering regulatory and spectrum fees.

The mobile industry has also played a crucial role in the global economy as an innovation platform for new services. Mobile networks provide unique opportunities to reach new customers, and to monetise products and services. The industry has enabled the emergence of a number of “innovation hubs” across the world. These mobile innovation ecosystems contribute to the empowerment of individuals and societies, not only through the opportunities they create, but also through the solutions and services they deliver.

Mobile connectivity has already transformed daily life across the globe and is playing a particularly strong role in socio-economic development in many developing regions of the world. Mobile has brought voice services and internet access to the previously unconnected, bridging the digital divide and empowering communities. And the industry is focused on overcoming barriers and developing innovative new solutions to deploy networks in more remote and challenging environments, especially in developing regions. 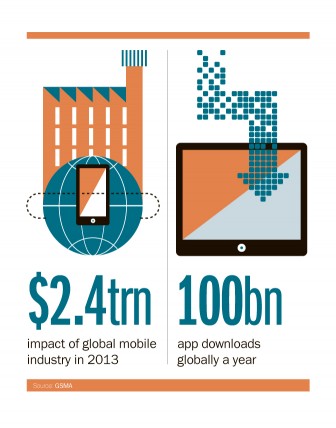 Mobile has benefited some of the most disadvantaged communities through a range of life-changing and, in some cases, life-saving services. Mobile money is one such example, bringing financial services within the reach of previously unbanked and under-banked populations. Mobile technologies can extend access to education, particularly in remote areas; mobile devices can act as a platform to provide access to educational content, as well as helping to address the shortage of teachers evident in many developing countries.

Delivering the digital future will require a collaborative approach across the industry, among operators, as well as newer entrants to the mobile ecosystem. At the same time, policymakers should ensure the right conditions are in place for the full transformational potential of mobile services to be realised. As the mobile internet gains momentum, policy change is required to ensure that adequate investment and innovation comes from all ecosystem players. Operators and investors need stability and clarity in order to fund the significant investment needed over the coming years, both to extend coverage to more remote areas and to meet the growing demand for higher speed connectivity. And securing additional, long-term harmonised spectrum will also be critical in realising the potential of the digital future.

The mobile industry has the opportunity to deliver even greater benefits to society in the future, with the potential of connecting almost anything and anyone. The world of 2020 will offer a range of life-enhancing services powered by a vibrant mobile ecosystem that connects the physical and digital worlds. This convergence will unleash a new dimension of services that improve the quality of consumers’ lives and the productivity of enterprises, spreading far beyond communications to provide dramatic improvements in sectors, such as energy efficiency, security, health and education. We look forward to playing a leading role in delivering this truly connected life.