British luxury has a perennial allure, but the industry faces challenges in a sometimes volatile global market

The future is looking bright for British luxury. From cars to jewellery, fashion, yachts, restaurants and hotels, Britain’s luxury sector is worth a handsome £32.2 billion, according to a report commissioned by law firm Charles Russell Speechlys in association with Walpole, an alliance of luxury businesses, including Alexander McQueen, Burberry, Rolls-Royce, Selfridges and The Savoy. The world’s appetite for Britain’s craftsmanship, heritage, service and occasional eccentricity now contributes £5.2 billion to the chancellor’s purse.

“A business card for Britain, the brands in the UK’s luxury goods sector represent the core values of luxury – creativity, innovation, design and the highest possible quality – and are recognised throughout the world,” says culture and digital economy minister Ed Vaizey, perhaps unsurprisingly given Britain’s luxury industries represent more than 2.2 per cent of gross domestic product and 4.3 per cent of exports, totaling £25 billion.  By 2019, sales of British luxury are forecast to exceed £50 billion.

Walpole director Mark Henderson, one of British luxury’s staunchest advocates, is so confident in the British luxury industry that in 2012 he co-founded The New Craftsmen, a Mayfair showcase of British crafts spanning jewellery, furniture and homeware.

“The future for bespoke tailoring is not only bright, it’s positively blinding,” says Mr Henderson, who is also chairman of Savile Row tailor Gieves & Hawkes, a company with a client list that includes every British monarch since the late-1700s.

“Craftsmanship is deeply rooted in our national character, expressing our history – think churches, homes, palaces and the pieces that fill them – and the fabric and individualism of the country – think Stoke on Trent, Sheffield, London’s East End, Savile Row, Hatton Garden, the Shetland Isles, Lancashire and Yorkshire – but we are also blessed with phenomenal design, digital and entrepreneurial skills.

“Demand from domestic and overseas clients is growing as today’s global clients seek out differentiated experiences and one-off products. Tailors in Savile Row are investing in apprentices to ensure the skills can meet demand. In the past eight years, 50 have completed apprenticeships on the Row.”

In a sign of the confidence which Britain’s luxury economy attracts, three prestigious jewellers founded by a coterie of international entrepreneurs, have chosen London’s Mayfair as their first and only home to date. They are leading online jeweller 77 Diamonds, with two Belgians at its helm and a showroom on Hanover Square, Nourbel & Le Cavelier, started by a Swiss and Lebanese duo with a boutique in Burlington Arcade, and creative diamond and jewellery house Star Diamond, founded by partners hailing from Belgium and Armenia, with an appointment-only gallery on Dover Street.

“Not only is London one of the world’s leading cities in the arts, fashion, commerce and luxury, we also love it for its dynamic heritage. Being the most visited city in the world, it was clear where we wanted to be,” says Philippe Roth, Star Diamond managing director.

British watchmakers Bremont, whose fanbase includes movie star Tom Cruise, is the first British official timing partner for the Americas Cup since 1851 and was founded by the appropriately named brothers Nick and Giles English. Bremont manufactures watch parts in Silverstone, marking the first time in decades that a luxury watchmaker has produced watches on this scale on British shores.

“While many international brands have taken the overtly commercial road at the cost of quality and invention, relying on marketing and paid-for endorsement at the cost of fine product, the more quirky and thoughtful niche names have prospered. Britain has always been good at producing these,” says British jeweller to the stars Theo Fennell.

“We rely on our customers being self-confident enough in their own style and taste not to have to follow the big names, and have more fun with original pieces and bespoke work. In Britain we produce timeless work rather than fleeting fashion and that difference seems to be increasingly popular.”

Meanwhile, Spectre marks Daniel Craig’s fourth outing as the quintessential British spy, and for some British luxury brands, including Barbour, Belstaff, Royal Doulton and The Macallan, a partnership with James Bond has proved a persuasive British combination.

“From London to Shanghai, raising a glass of The Macallan speaks of culture and sophistication, it shows a degree of understanding of the finer things in life and an appreciation of quality, something which has always been a sign of Britishness,” says Ken Grier, brand director for The Macallan.

“The Barbour jacket Daniel Craig wore in Skyfall retailed for £400, but after the film they were selling on eBay for up to £2,500. In one scene, a Royal Doulton porcelain British bulldog, which appeared on Judi Dench’s desk in her office overlooking the Thames, sold out completely after appearing in the film,” says Darryl Collis, managing director of Seesaw Media, which secured product placement for Spectre.

London is now the third largest city for luxury goods in the world, with a market size of more than €10 billion, behind New York and Paris, according to management consultants Bain & Co. The biggest challenges British luxury brands face include the Chinese economic slowdown, currency fluctuations and the pressure to respond to the growth of e-commerce with imaginative online experiences that reach a wider demographic. While online sales currently stand at 6 per cent of global luxury brand turnover, by 2020 this is predicted to grow to 20 per cent, according to Exane BNP Paribas.

In 2015, Middle Easterners overtook Chinese shoppers as the biggest international spenders in the UK, accounting for 32 per cent of spending, while Chinese represented 25 per cent and Americans 4 per cent, according to tax refund specialists Global Blue.

Despite the Chinese slowdown, the market is still a key growth area for the luxury sector, says Walpole chief executive Michelle Emmerson.

Sixth generation British jewellers Boodles, originally established in Liverpool in 1798, have doubled the size of their Bond Street store and are upbeat while eyeing expansion in Dubai and New York.

“Our British heritage and a sense of British fun and eccentricity filters through our company. We don’t take ourselves too seriously,” says director James Amos. “Our chairman Nicholas Wainwright is renowned for wearing pink socks and ties to match our brand colours. Our iconic Raindance ring is inspired by that most British of things, the rain. After a speech by British icon and Oscar winner Emma Thompson at our store opening night last month, the Boodles directors and staff did an impromptu conga behind the band London Essentials.”

Henry Poole has been serving the world’s royalty and celebrities for more than two centuries. The company became the inventor of the tuxedo when in 1865 the Prince of Wales and future King Edward VII asked for a jacket for informal dinners at Sandringham. 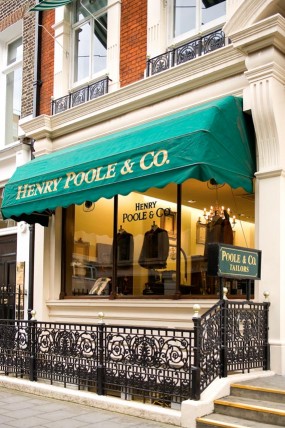 While the company has a tradition of claiming no official house style, its tailors are accustomed to fulfilling the unique requests of its diverse 21st-century clientele, who include British design powerhouse Marek Reichman, chief creative officer at Aston Martin, also known as the man behind the Aston Martin One-77 and the £2-million Vulcan. Mr Reichman favours an inside jacket pocket to fit his iPhone 6+, one for his business cards and one for credit cards with a button closure, precluding the need for a wallet.

It’s also not unusual for Henry Poole customers to be found enjoying a 25-year-old Chivas Regal by the Henry Poole fireplace, while discussing their wardrobe needs for the coming season.

Seven generations and 209 years ago, James Poole opened the doors to his cloth-trading business. Soon after his son Henry took the helm in 1846 at 13 Savile Row, other tailors moved to the street which was to become the byword for top-flight tailoring the world over. Once Henry Poole & Co secured the custom of Napoleon III and Edward VII, the company was bestowed with the first of its many royal warrants, and began serving Europe’s richest and most extravagant men, becoming in 1890 the largest bespoke tailoring firm in Europe.

Today the Japanese word for suit is sabiro, the root of which is Savile Row.

Sports icon and underwear model David Beckham has shaken up the three-centuries-old world of Haig Club fine whisky. Rumour has it his favourite way of drinking Haig Club is neat or in the Haig Clubman, a cocktail made with sparkling apple soda, ginger bitters and a slice of ginger root served over hand-cracked ice, a drink which has become affectionately known as the Beckham Blend. He is said to have a personal affinity to Haig Club since it was his grandfather’s favourite whisky. 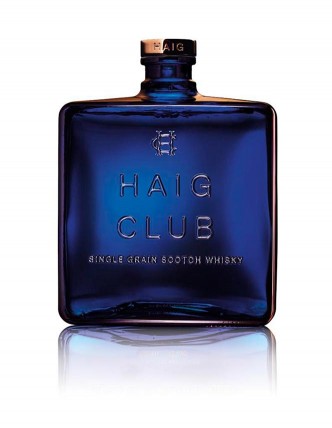 While an advertisement directed by Guy Ritchie, and the brand’s association with Beckham and his business partner Simon Fuller, manager of the Spice Girls, Amy Winehouse and creator of American Idol, are relatively new, the House of Haig can trace its whisky-producing roots back to the 17th century, making the Haig family Scotland’s oldest grain whisky dynasty. The content of each blue bottle is crafted at Scotland’s oldest grain whisky distillery, Cameronbridge in Fife.

The blue Haig Club bottle draws its inspiration from the tradition of master whisky blenders who did not want to bias their tasting by the colour of the spirit, but rather reviewed it on aroma and taste alone.

Today, Haig Club is part of spirits group Diageo’s vision to make whisky, and in particular single grain Scotch whisky, the most vibrant category in its offering. The plan seems to be working. At the global launch in Scotland, during an exclusive dinner hosted by Beckham and Fuller, curated by the prophetically named Michelin chef Tom Kitchin, David Beckham’s Facebook post from the event prompted 200,000 likes in 45 minutes and 1.4 million likes within 12 hours. A successful British luxury export if ever there was one.