How to use engagement data from events

Data is only as useful as the user makes it. Simon Clayton, founder of badge and registration company RefTech, did some secret-shopping research sending spies posing as juicy prospective clients to speak to people at stands at a major exhibition. Astonishingly, only half the exhibitors followed up later. When they repeated the experiment more recently, just a quarter followed up. Only one in four exhibitors actually bothered to follow up with a promising lead after the show.

Given how costly it can be to have a stand at an exhibition, you have to wonder, was the volume of potential business so great that exhibitors simply didn’t have the time to follow up? Or was it a combination of not using the data properly and moving on too quickly after the show finished?

Engagement data – its collection and application – is perhaps the area within the realm of business events that is seeing the most pronounced and rapid rate of innovation. Much of this is in line with the increasing speed and miniaturisation of computer networks, the internet of things, for example.

One example that may have helped Mr Clayton’s hapless secret shopper is the lead capture app offered by Akkroo. Downloadable on to tablets and smartphones, the customisable Akkroo app replaces the clunky traditional methods of collecting stacks of business cards or filling out paper forms on-stand, only to transcribe them (or not) into a spreadsheet after the event.

With more data being collected before the show even starts, it’s now possible for visitors to fill their schedules with meetings before getting on the plane

Akkroo lets exhibitors scan business cards or badges and automatically transcribes them into a cloud-based data hub, from where they can be poured into the company’s own customer relationship management system such as Salesforce. That’s right, take a picture with your device and before you’ve finished your conversation the visitor’s name and contact details are already making their digital way into your company’s sales system.

Another cutting-edge app that helps organisers stay organised is Eventsforce. Not only does the Eventsforce app enable organisers to see who precisely is registered to attend a given break-out session, for example, but the audience demographic information it produces can be shared with a speaker to allow them to customise their presentation.

Perhaps more fascinating, albeit nerdier, is the ability of the app to track which sessions are full and which have space left, and tweak digital signage on the show floor to direct people to the places where seats are still available. 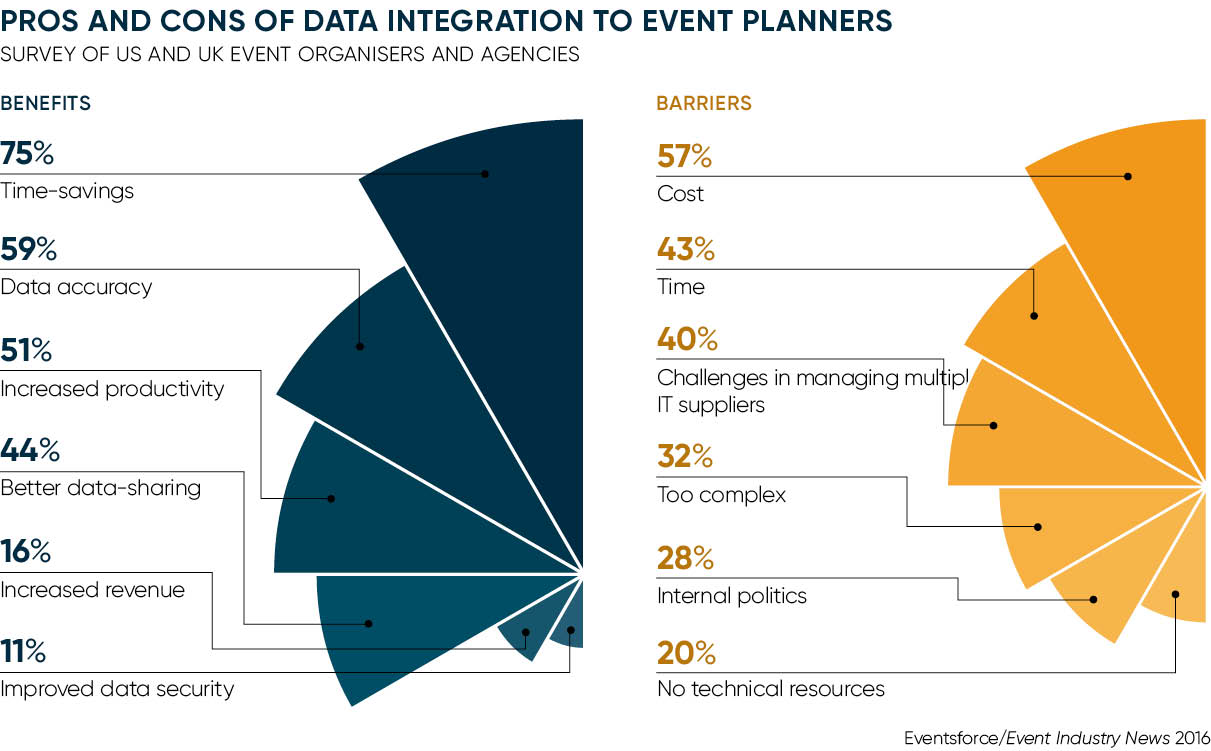 The intense, albeit brief, hype surrounding Pokémon Go brought augmented reality into the mainstream consciousness. But this budding technology had been on the event industry’s radar for much longer than that.

According to Alistair Turner, managing director of EIGHT PR & Marketing, some technology innovators are trying to bring augmented reality to the show floor by using beacon technology in the venue to track location and dwell time of visitors or delegates. Imagine holding up your mobile phone to see a live projection of the show floor through your camera with marker pins layered on top indicating the location of compatible buyers or sellers, or your next meeting.

With more data being collected before the show even starts, it’s now possible for visitors to fill their schedules with meetings before getting on the plane.

Increasingly, the world of event technology is focused on live feedback of delegate/visitor experiences. Some innovators are looking to take this even further by tapping into the social media profiles of visitors. Assuming visitors grant the appropriate permissions, tech such as Live Styled can in theory be used to track feeling and sentiment in a more analytical way.

When linked with the IT infrastructure of the venue, Live Styled claims to give organisers live “sentiment” information, for example if people are tweeting that they’ve been waiting ages for the loo, an organiser can pick up on that and tell people the locations of alternative facilities.

So much for business-to-business events, where registration is more than someone simply buying a ticket at the gate, everyone wants to make deals and most people come equipped with a supply of business cards.

Things are different at consumer events, where people are more reticent to hand over their details, and will often buy items then and there with cash over the counter, meaning organisers can’t build customer profiles in as deep a way.

Some organisers are trying to encourage prospective visitors to buy tickets in advance, but a lot of consumers simply don’t feel strongly enough about a given event to do that.

This could be where Adestra’s e-mail builder could come in. While not as explicit a data collection tool as some of the other examples, the Adestra system enables marketing teams to swap out unwieldy html e-mail templates with more dynamic, modular formats that are easier to design and send, even live from the show floor. By increasing open rates and conversion rates, and sending out appealing live updates from the event itself, organisers can entice more guests, and convince existing guests to stay longer and return next year.