A new wristband for contactless payment is set to make life a lot easier, says Barclaycard

You can hear the groans. Some poor fool is causing a tailback. They are trying to pay for their morning travel journey, but the card reader isn’t having any of it. They’re putting their wallet firmly down and have stepped back from the gates, but by having more than one card in the wallet or purse, they’re not getting anywhere.

It’s “card clash”. The commuter will have to pull the right card out of the wallet and then touch it to the reader. Behind them a queue of commuters tuts and sighs.

Now that contactless payments have arrived at London Tube control gates, on trams, trains and buses, it’s a scene you’ll see more of on the capital’s busy transport network.

But it needn’t be that way. The new bPay band from Barclaycard will end card conflicts forever. Just touch your wrist on the bright yellow circle card reader and – green light – you are through. No rummaging in wallets, digging around in handbags or having to step back to allow the gates to reset. Just a split-second movement.

The bPay is the next evolution in contactless payment. And it works wherever you can pay using contactless – including, from this month, on the London transport network. bPay is a new way to pay, with a pre-paid account at its heart, which you link to a mini contactless chip and put on your wrist for convenience.

The band can be used by the holders of any UK debit or credit card, not only Barclaycard, with funds added either manually or automatically, when credit gets low, and your balance sent by text when you top up.

Smoother travel is just the start for bPay. You can use it to pay for drinks, newspapers, sandwiches, in fact anything for £20 and under wherever contactless payment is accepted, including Marks & Spencer, Starbucks, Pret A Manger, McDonald’s, Eat and Boots.

It will eliminate the fiddling around with loose change or looking for your payment card in the depths of your bag while the queues build up behind, which slow transactions down and are the bane of shopkeepers.

How close are we to seeing bPay across the land? In fact, it’s already out there. bPay was trialled as a cash replacement at this summer’s Pride in London annual LGBT festival, and at the Barclaycard Presents British Summer Time concerts in Hyde Park. The result? Success – so much so that bPay is now being trialled on a much larger scale. A full public launch is scheduled for 2015.

The innovation won’t end there. After paying for travel and shopping, bPay will soon come to be used for a whole load of other applications. Football fans will be delighted to hear that season tickets, stadium access and payments on match day could all be incorporated into the one wristband. The old worry of losing your ticket, getting it soaking wet, forgetting it or having it stolen, are gone. Fans will be able to gain access to the ground by using bPay on contactless terminals.

Other forms of ID can be woven into bPay. Gym membership is a possible candidate. Gym-goers often like to run to their local workout, but currently need to carry a wallet with them. When bPay incorporates the gym card this won’t be required. And what else? Music festival tickets, coffee house vouchers, school lunch bands for the kids and university ID cards could all be incorporated on to bPay. If, that is, the user consents, and merchants, brands and organisations have the foresight to see where this technology is heading.

Naturally there are some security questions around such groundbreaking technology. The answers tend to be the same as with debit and credit cards. Lose bPay and you can cancel it, just as you do with a card. Encryption technology makes it incredibly hard to clone. And it’s even better than a card in that there are no customer details on it. If it is stolen, the threat of identity theft is thereby reduced.

Just like contactless cards, there are no charges to the user for paying with bPay. And it’s open to everyone, regardless of who they bank with – any UK Visa or MasterCard® debit or credit card can be linked to it.

Users should be reassured by the Barclaycard brand. Barclaycard launched chip and PIN on to the market, the first ATM, the first credit card and brought contactless payments to the UK. With 36 million customers it has the size, and duty, to test new technologies to exacting standards. This is not a gizmo produced by a publicity hungry startup. 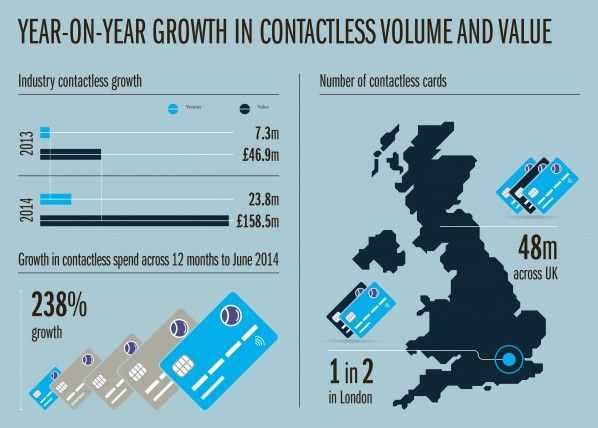 So are we entering a cardless society? Barclaycard’s chief of digital payments Mike Saunders says: “Wearable payment devices are becoming increasingly popular as they’re a fast, secure and easy way to pay. Consumers tell us they want more than one function from their wearables. Payment capability is just one ingredient and there are a wide range of potential applications – access, loyalty, branding, affiliation and recognition.

“We’ve been running trials of the forerunners to the bPay band for the past two years at closed events and for a limited time. The feedback from this – and the fact that we saw regular demand from trialists to be able to use the devices after these events had finished – was enough to satisfy us that consumers are ready to embrace this technology, so long as it works for them on a number of levels.”

An important factor, which is likely to help bPay compete with rival payment types, is fashion. A number of designers have shown interest in remodelling the band to create haute-couture jewellery. High street brands are also keen to give bPay band a make-over. After all, it won’t be long until wearable payment devices are as common as a wristwatch. So they ought to look as wonderful as they perform.

For more information or to sign up for a bPay band, please visit www.bpayband.co.uk