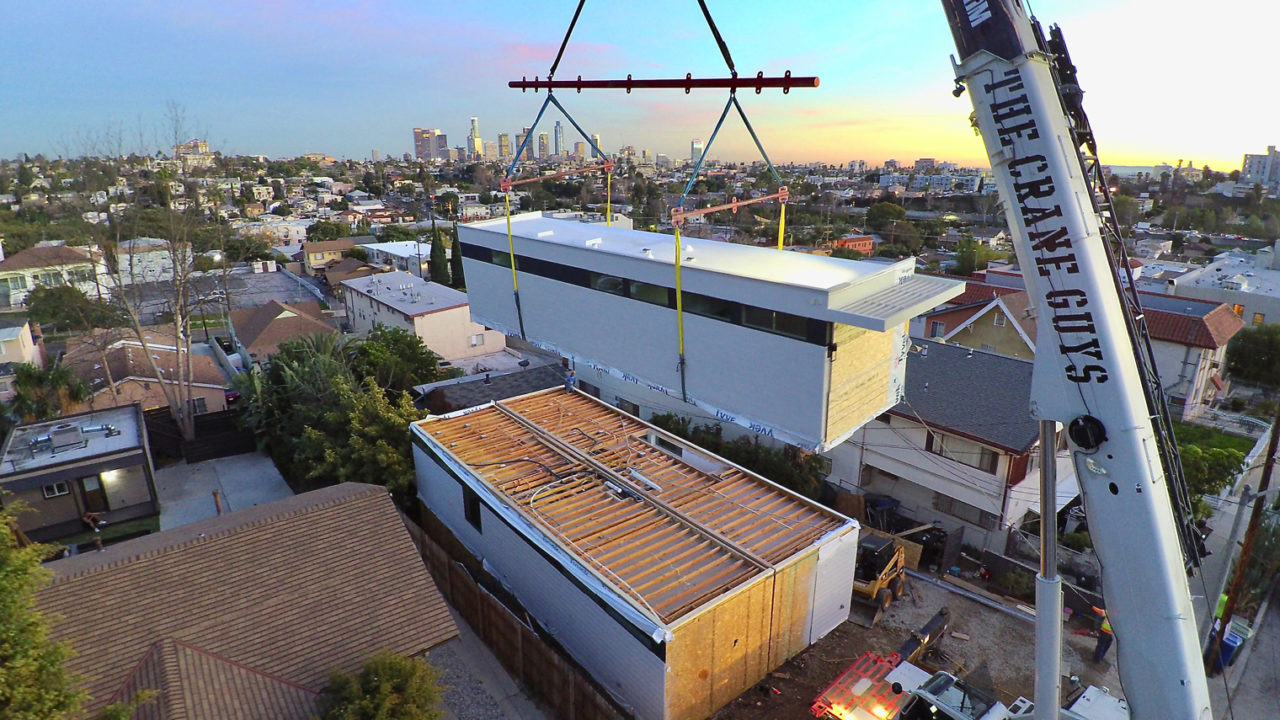 As a newly qualified architecture graduate in the mid-90s, James Pickard said goodbye to the UK and moved to Sweden. He found a job, enrolled at night school to learn Swedish and set out to immerse himself in the country’s design culture.

One day on his way to work, he noticed a house under construction. Mr Pickard grew increasingly incredulous as he saw the building take shape throughout the week. On the fifth day, the house was completed and he saw a family eating dinner inside. He knocked on the door and asked if he could take a look around.

The house had been built using prefabricated construction: manufactured in sections at a factory and then assembled on site. Once inside, Mr Pickard was taken aback. Back in the UK, prefab was still a byword for poor design quality. This house featured heated floors, triple glazing and insulation so efficient that the radiators were the size of small briefcases. “That was my first awakening to the benefits of off-site manufacturing,” he says.

Two years later, Mr Pickard was back in the UK and running his own practice. Cartwright Pickard had been in business for a month when Peabody, a large London housing association, announced it was seeking prefab designs for a project in Hackney. Drawing on Mr Pickard’s experience in Sweden, the practice submitted a proposal and won its first commission.

Murray Grove was completed in November 1999 and were the UK’s first modular apartment buildings. Thirty homes were completed in six months, around half the typical build time, and the project went on to win a series of design awards.

Nearly 20 years on, boundaries are still being broken in prefab construction: a deal was struck earlier this year to develop the world’s tallest modular towers in Croydon. But prefab is still nowhere near mainstream adoption in the housing market. Why? Mr Pickard believes architects, and their reluctance to embrace standardised construction methods, deserve a share of the blame. “Architects still believe that every building is a prototype, bespoke, one-off and, if it isn’t, we’re doing ourselves out of a job,” he says.

Simon Bayliss is managing partner at HTA Design, the architecture practice behind Apex House, a 29-storey student accommodation tower in Wembley, built using modular construction and completed last year. “There are probably some architects who slightly fear it and fear loss of control or creativity,” says Mr Bayliss. Those concerns are unfounded, he says.

However, prefab projects do require architects to think differently. For starters, design details need to be pinned down much earlier in the process. “You need to have decided what your taps and tiles are going to be at the same time as you’re sorting out your foundations,” says Mr Bayliss.

California house builder Plant Prefab, whose investors include Amazon, has partnered with a series of leading designers on its off-site construction projects. Chief executive Steve Glenn says architects have a key role to play in the firm’s attempts to persuade design-conscious clients to embrace prefab construction. “The formula was, and is, get world-class architects and use prefabrication to make the homes more efficiently,” he says.

Plant Prefab works with architects in two ways, hiring them to design bespoke homes using prefab construction methods, but also enlisting practices to draw up plans for its standard homes, which are customisable, but easily replicable, designs that then earn the architects royalties.

How prefab building can standardise, and maximise, quality

Kieran Timberlake is among Plant Prefab’s design partners. James Timberlake, founding partner at the Philadelphia-based practice, says he sees value in both business approaches. “I don’t think architects are going to get crowded out of the off-site delivery model,” he says.

Rogers Stirk Harbour + Partners is known for designing iconic buildings, including London’s Cheesegrater, more formally known as the Leadenhall Building, which was built using 80 per cent prefabricated materials. At the practice’s offices on the 14th floor, partners Ivan Harbour and Andrew Partridge recall how they began working on large residential projects around 15 years ago. Almost immediately, it became clear there were huge inefficiencies. “There was a lack of standardisation,” says Mr Partridge. “Every bathroom, every stairway was different.”

The firm began applying the lessons it had learnt on commercial buildings and went on to complete a series of innovative housing schemes using prefab construction. Homeshell was one such project, a three-and-a-half-storey home assembled outside the Royal Academy in just 24 hours in 2013. That prototype is now the basis of a partnership with engineering firm Aecom, which will see Homeshell brought to the mass housing market in the coming year.

“It’s standardising quality,” says Mr Harbour. “But it’s not standardising space. This isn’t about saying these things are all the same. That is absolutely critical.”

The two architects agree that architectural design will be crucial to Homeshell’s success, ensuring projects respond to their specific settings, and are of the quality and variety necessary to appeal to consumers. “You can’t just do an estate of 300 units all the same,” says Mr Partridge. So is prefab about to go mainstream? “We’ve been saying that for quite some time,” he says. “We travel hopefully and never give up.”