The way we work has changed dramatically over the last decade but working together has consistently proven to be a key factor in the improvement of business. A recent study conducted by Raconteur and Google for Work surveyed 258 C-Suite executives from North American companies representing a diverse range of business sectors and sizes.

The first of four core areas of significant findings highlights the certainty that collaboration is good business, and that the benefits of collaboration extend far beyond the success of any single project. An overwhelming 73 per cent of respondents agreed that their organization would be more successful if employees were able to work in more flexible and collaborative ways.

Efficient ongoing collaboration has a fundamental impact on business innovation, performance, culture and the bottom line

What’s more, ‘employees working together more collaboratively in person’, ‘better communication between teams’ and a commitment to ‘open innovation’ are the factors that respondents would expect to have the most profound effect on the profitability of a company. When asked what changes would have the greatest impact on their organization’s overall profitability, 56 per cent of respondents ranked a collaboration-related measure as the #1 factor.

The survey revealed that efficient ongoing collaboration has a fundamental impact on business innovation, performance, culture and the bottom line. IT departments are at the core of collaboration and innovation as millennials and digital natives, who are actively seeking work tools that make sharing and collaboration easier, increasingly rely on these teams. Whilst the IT team are recognised as the internal heroes of most organisations, upper management are slow to adopt these technological tools, creating a widening gap between innovation and collaboration. 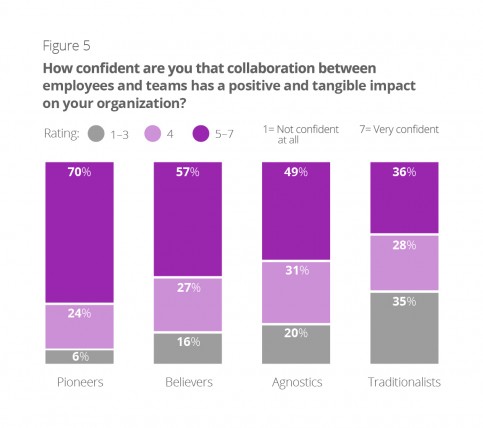 Unfortunately, in the real world, meeting in person is not always possible. So business leaders may find that they benefit from providing guidance to employees on increasing the effectiveness of remote communication. A good starting point is encouraging video conferences, which are still a significantly underutilized resource compared to the traditional audio conference call. Video conferences put people face-to-face, recreating some of those critical benefits of meeting in person.

Whilst 53 per cent are confident that collaboration is having a positive and tangible impact on their organization, a significant minority (20 per cent) still aren’t convinced. Part of this may be due to the fact that making a major commitment to collaborative working and effective teamwork is a new challenge for many organizations. It takes time to hone any new process or mode of working, but by reassessing the way we think about the notion of ‘work’ itself, the benefits of collaboration can be more easily realized.

The survey revealed that customer engagement is the biggest driver behind the need to innovate; 20 per cent of respondents named it as the #1 factor.

This enabler of business performance is clearly crucial at a time when businesses are reviewing the way in which they connect with their customers whether through mobile apps or loyalty schemes.

One brand focusing on customer engagement is Krispy Kreme who last December created the “Joy Goes Around the Holiday Hangout” campaign, an interactive in-shop experience that allowed their guests to toast to the holidays through customized Krispy Kreme Hangouts.

Chromebooks were installed in 17 of their retail stores enabling customers to use Google Hangouts to engage with other fans around the world.

This study of 258 North American business and IT leaders, produced by Raconteur and Google for Work, was conducted in Q1 2015.

Respondents were asked to complete an anonymous online survey about their beliefs and predictions around innovation and collaboration in the workplace. The individuals that responded to this survey represented a broad spectrum of industries in terms of both their size and main areas of activity.

The respondents of Google for Work’s survey were defined by four categories;

About Google for Work