Growing numbers of consumers are willing to invest substantial sums to maintain their looks, but in return they want proof that new products are having a genuine effect.

Cosmetics companies have in the past relied on various forms of barrier moisturisers that simply reduced water loss. Now they are crossing continents for DNA samples from plants, animals and insects in a relentless search for new ingredients that will slow down or even reverse the ageing process in human skin.

Hundreds of natural substances are being shown to have biological effects, replacing or preventing the breakdown of collagen, the primary skin plumping agent, reducing wrinkle formation or promoting skin resurfacing.

These functions are being demonstrated because of the advent of high-throughput gene-chip technology, which allows scientists to observe whether proteins from naturally occurring compounds stimulate or suppress the function of different genes.

The primary aim is to find new ingredients with the potential to boost the activity of genes involved in skin maintenance and repair.

There is already laboratory evidence explaining the beneficial mechanisms of traditional remedies such as aloe vera for wound-healing, witch hazel for skin inflammation and evening primrose oil as a moisturiser.

Specialist skincare scientists are continually finding more and more of these natural bioactives that can be adapted for cosmetic use.

This new age of so-called cosmeceuticals allows cosmetics companies to get round the legal restrictions on pharmaceutical products. New molecules for use in drugs have to go through a ten-year process of laborious safety and efficacy studies before they are approved for human use. Molecules from natural sources already present in the environment do not need this approval.

However, educated consumers increasingly expect peer-reviewed publications in scientific dermatology journals and companies need the research results to support the claims they make for their products.

Although technically not considered an organ, the skin is actually our most vital and complex body part, a water and infection-resistant barrier that also keeps us in touch with the outside world. We are covered by an average of two square metres of it, and it is specifically designed not to absorb foreign materials, even if they are being introduced with the best of intentions of keeping our faces young, soft and wrinkle-free. 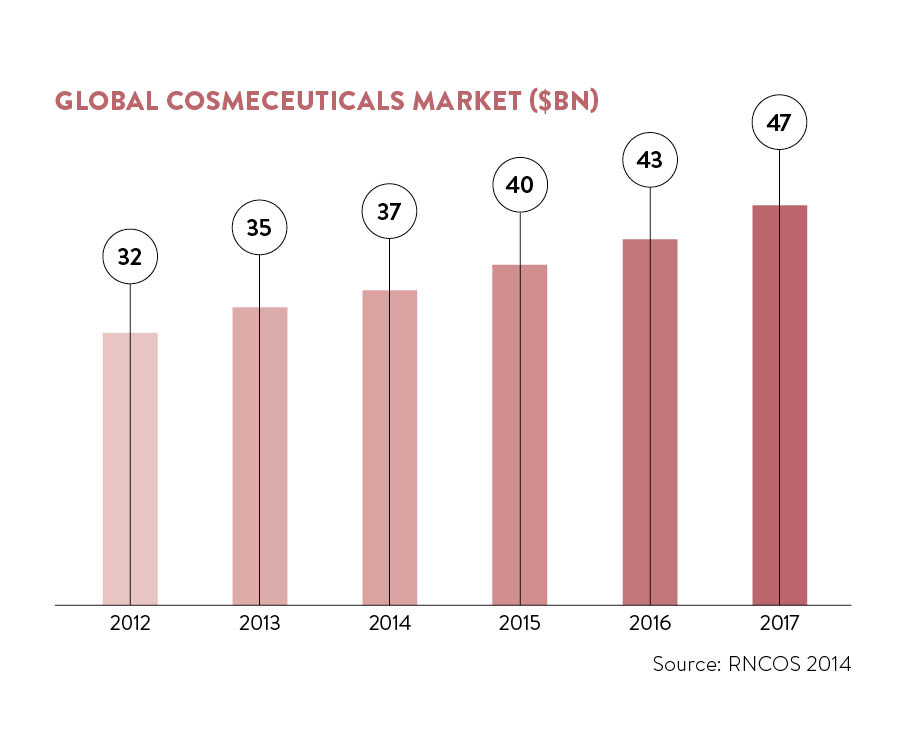 The outer stratum corneum is composed mainly of relatively tough keratinocyte cells, which are already dead. Beneath are several layers called the epidermis, where various ages of keratinocyte cells are working their way to the surface, where they will flake off, in a cell turnover process that takes about five weeks. The epidermis also produces melanin, the pigment that protects us from sunlight damage.

Below the epidermis lies the dermis, a spongey layer criss-crossed by blood vessels and nerves, and largely made up of fibroblast cells sitting in a mattress of collagen and elastin, called the extracellular matrix. Fibroblasts secrete the raw materials to make and maintain the extracellular matrix, and all the other factors required for wound-healing and damage-repair.

The dermis also contains sweat glands and sebaceous glands that secrete an oily lubricant for hair and skin.

There are at least 13 different cell types, more than 400 genes and about 19,700 proteins involved in skin maintenance, and the efficiency of all these elements declines with age.

Ageing facial muscles lose elasticity and the dermis shrivels from the loss of collagen, losing up to 80 per cent of its thickness over a lifetime, and leaving a network of wrinkles on the surface.

As we all live longer and stay at work for longer, the importance of maintaining a face that looks young, healthy and employable will go well beyond vanity. This social trend has further fuelled the rise of cosmeceuticals.

“Gone are the days when anti-ageing skincare was ‘hope in a jar’,” says Kathy Rogerson, a science spokeswoman for Olay, Proctor & Gamble’s biggest brand. “Women are far more savvy nowadays and need to know that the products they are buying really will work; that’s why we use proven ingredients with data published in peer-reviewed publications.”

In the past year alone, there have been hundreds of new scientific publications from laboratories around the world investigating any number of new mechanisms. One study shows that niacinamide, a compound derived from natural vitamin A, can inhibit the melanin malfunction that produces brown age spots. Another demonstrates skin regeneration thanks to a product derived from the stem cells of apples. A third shows retinol, another vitamin A derivative, can boost natural skin moisturisation and cell regeneration in menopausal women, when applied as a facial peel.

Dr Chris Flower, director-general of the Cosmetic, Toiletry & Perfumery Association, believes cosmetics companies probably now have the know-how to achieve dramatic improvements in ageing skin, but are reluctant to reveal their research.

“They are either limiting the claims they make for products or limiting the use of new ingredients because, if they show a significant biological effect, there is a risk they will be classed as medicines,” he says. “The manufacturers will need to show long-term safety data and that, if they can switch on biological activity in the skin, they can also switch it off again.”

Possibly for this reason, Mike Bell skincare scientific adviser at Boots, believes some women are turning away from products which make bigger claims of a biological effect. “We think they want to be reassured that products contain ingredients they are familiar with, and whose performance they trust and believe in,” he says.

Cosmeceuticals are not only creams to be applied to the skin, increasingly they are emerging as products you swallow. Nestlé and L’Oréal have jointly developed Innéov, a scientifically validated skincare product based on the nutrient lycopene found in tomatoes. Despite the fact Innéov generated £40 million in worldwide sales, it was withdrawn in 2014 and neither company will comment on what is being developed instead.

Meanwhile, the use of liquid collagen is booming. Professor Steffen Oesser of the University of Kiel in Germany has shown that it is possible to replace collagen in the body, and has published research showing extra collagen molecules from drinks migrate to areas of damage in the skin and joints. “It would be naive to say that taking oral collagen can stop you ageing altogether, but it can boost body repair processes,” he says.

Collagen Gold has become the best-known UK version. Based on purified collagen derived from fish scales, it has been so successful the company has invested £5 million in academic studies, at universities in Britain and elsewhere in Europe, to gather further evidence of its regenerative effects on ageing skin fibroblasts, and on hip and knee joint restoration, where collagen is also important.

Early results have been encouraging and the first research findings are due to be published later this year.

“There is no doubt that interest in cosmeceuticals is growing because of the evidence these products really do have an effect,” says Dr Martin Godfrey, the company’s spokesman. “We are very optimistic that the combination of collagen and other ingredients in our formulations will have a demonstrable benefit.”

Liquid collagen remains expensive, however, and has yet to break into the mass market. 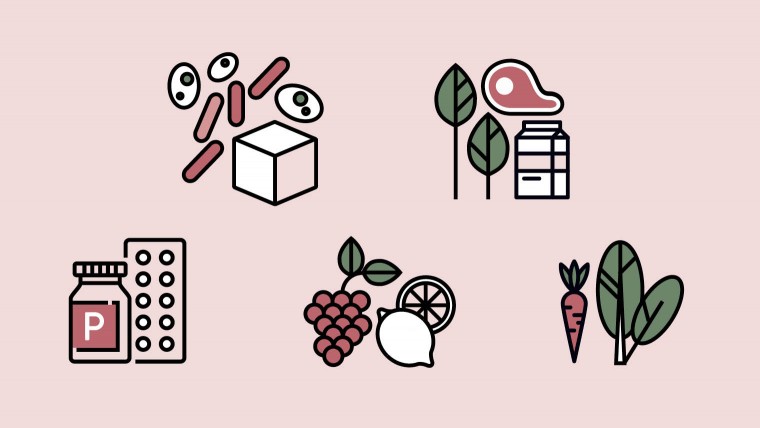 A natural lubricant found throughout the body, the production of hyaluronic acid declines with age. It is produced in large volumes for cosmetics from a variety of sources, including genetically modified bacteria, but also from glucose or yeast extract. Its large, slippery molecules mainly sit on or just beneath the surface of the skin and are not absorbed, creating a soft, plump moisture-retaining surface. It is also an anti-inflammatory and will help to heal minor blemishes such as insect bites.

Derived from nicotinic acid and otherwise known as vitamin B3, niacinamide is a water-based soluble compound, and is found in whole grains, green vegetables, meat, milk and yeast. It is a potent cell-communicating ingredient that offers multiple anti-ageing benefits. A synthetic form of niacinamide is a key ingredient in the world’s best-selling Olay moisturisers. As well as its anti-ageing properties, it can help to even out skin tone and reduce blemishes.

Synthetically manufactured versions of natural compounds, peptides trigger production of new collagen, elastin and other proteins involved in maintaining skin “scaffolding” and preventing or reducing wrinkle formation. The best known are branded Matrixyl (palmityl pentapeptide) or Argireline (acetyl hexapeptide-8) and are found in Olay and Boots No7 brands. Like other popular ingredients, peptides also reduce the inflammation or uneven tone of older skin.

Antioxidants are most commonly vitamin C derivatives or resveratrol, a synthetic version of a compound found in the skin of red grapes. These ingredients stimulate collagen production and reduce uneven pigmentation. Ascorbic acid, the most active form of vitamin C, is hard to stabilise and has limited shelf life. Skin scientists have developed a variety of newer versions which only break down once they are in contact with the outer few cell layers of the skin.

Derivatives of vitamin A called retinoids, listed among ingredients as retinyl palmitate or retinyl acetate, are also synthetic versions of the compounds found in eggs or vegetables such as carrots and spinach. They boost cell-signalling, help regulate turnover of surface skin cells and repair damage caused by sunlight exposure. Stronger concentrations of retinoid creams are often used for spots and acne because they prevent dead cells from clogging skin pores and causing spots to form.