Climate change is transforming the way we build

Rotterdam, the medieval Dutch delta city, has always been exposed to the whims of nature. But climate change has exacerbated the predicament of the city, which is already adjusting to rising sea levels and sudden downpours by building water plazas and underground parking garages that can be turned into water reservoirs.

And Rotterdam’s architects are making sure that homes will remain standing when the next flood hits. Aqua Dock, an experimental project in the city’s harbour, features floating buildings. “The biggest challenge in building on water is that you have to address the dynamic of the water,” explains Jaap Peters, the city’s lead engineer on the project. “When it’s stormy and windy, you have a problem with waves. There’s more movement in a floating house than in a skyscraper during a storm.”

Knowing that residents won’t want to get seasick, Mr Peters and his colleagues are working on ways for stabilising the homes and plan to have stable, comfortable buildings in place within the next two years. The City of Rotterdam, the Port of Rotterdam Authority and Rotterdam University are jointly managing Aqua Dock, which will also feature experimental energy generation as buildings submerged in water can’t tap into the regular grid. And Aqua Dock is just the first step as Rotterdam’s goal is to build a floating city.

Its larger cousin Amsterdam has similar plans. Its IJburg neighbourhood already features several dozen floating homes, which will be joined by many more to form floating neighbourhoods, with jetties replacing walkways. That, to be sure, is prescient thinking, given that half of the Netherlands’ territory is situated one metre or less above sea level.

While most cities don’t have to worry about becoming completely submerged in water, the Dutch efforts are being studied closely by city planners, architects and construction professionals elsewhere. That’s because the changing climate is making the ways we have built our living and working spaces insufficient. Buildings will have to withstand larger temperature shifts, more severe weather, more exposure to floods.

“The built environment has a long lifespan, many decades, so buildings that are being built and renovated now will have to withstand larger effects of climate change,” says Esben Alslund-Lanthén, an analyst at Sustainia, a Copenhagen sustainability think-tank. “Architects and engineers are having to take into account not just hotter and colder temperatures, but heavier downpours, rising sea level and increasing examples of the urban heat island effect.” Winds are also expected to become stronger as climate change continues. 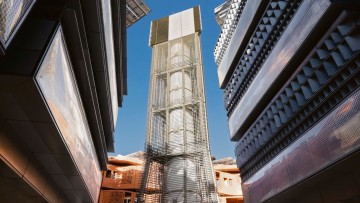 Indeed, architects and builders elsewhere are trying out their own pioneering solutions. In Masdar City, the United Arab Emirates’ model sustainable city, engineers have created a chimney-like vacuum that sucks out the hot air in homes and offices.

The American architect Ted Givens has designed a high-tech tornado-proof home. When a tornado or superstorm approaches, sensors activate the house’s hydraulic arms and lower it into the ground. The roof and windows, meanwhile, are automatically sealed. “The goal of the project is to shift the way people look as natural disasters and too ultimately design entire towns around the concept of disaster resistance,” says Mr Givens.

Mr Alslund-Lanthén adds: “Cities are pushing for innovation. They’re more exposed to climate change and their decision-making process is more nimble than that of federal governments.”

Climate-resilience measures don’t have to be as radical as the Dutch floating buildings, however. In fact, in order to be scalable, they need to be more modest. Stilts, in particular, are becoming a commonplace response to climate change. The flood-prone Swedish town of Kristianstad has put its new nature museum stands on stilts. In Cambodia, several new schools financed by the German government now also sit on stilts, elevating the buildings above the highest-measured water level. A Thai school damaged by an earthquake has been replaced by an elegant one on stilts. And buildings in the new HafenCity neighbourhood in Hamburg, located at the German city’s former docks, sit on plinths that elevate them eight to nine metres above the ground.

Radley Horton, a climate scientist at New York’s Columbia University, says: “There is also a trend towards passive survivability, whereby buildings can stay cool longer, should the power fail during a heat wave. Some measures may be as simple as ensuring that windows can be opened in the event of a power failure.” Indeed, passive houses, which consume close to zero energy thanks to their sturdy frame, are now becoming a common sight in cities. This month, the world’s largest passive house, a building featuring 370 apartments, was inaugurated in Heidelberg, Germany.

There’s also a more basic strategy of rearranging building interiors. “Because many cities will be exposed to more frequent and extreme flooding, buildings are increasingly being designed to accommodate occasional flooding, with critical building equipment being sited on higher floors,” says Dr Horton. 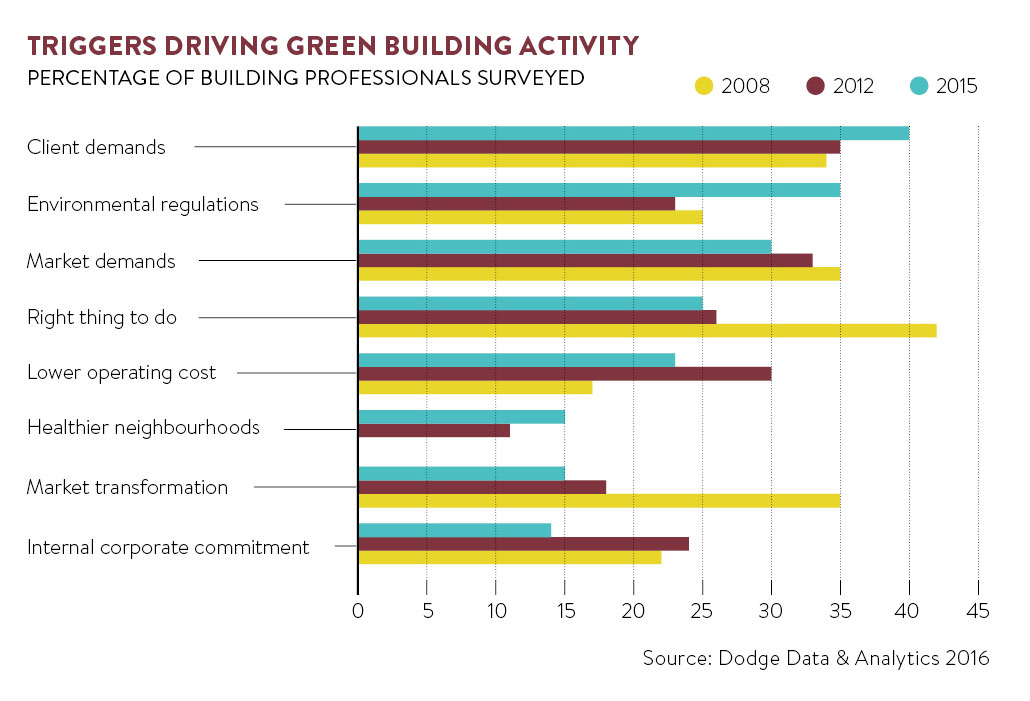 In countless cities, buildings now feature green roofs and walls where trees and bushes absorb heat and CO2. And in New York roofs on several buildings have been painted white. This inexpensive touch helps a building reflect 90 per cent of sunlight that hits it, thereby slashing the so-called heat island effect.

Rotterdam also boasts a city-funded climate-resilience retrofit project, where existing buildings are renovated to withstand a harsher climate without ending up looking like bunkers. “The largest challenge the construction world has today is how to deal with existing buildings,” says an architect behind the city’s Biobased Retrofit homes. “We try to use as much recycled materials as possible and if that’s not possible we use bio-based materials. But that’s quite expensive.” Bio-based materials include algae and organic agricultural residues.

That’s the dilemma. While the Biobased Retrofit homes, featuring new a new outside layer that better insulates them from downpours and extreme temperatures, are strikingly elegant, even retrofits can be very costly.

“There are several potential obstacles to upscaling resilience from the building to the city scale,” notes Dr Horton. “City building codes and the law can either hinder or support resiliency measures. It may also be more challenging to retrofit existing building stock, than to design with a tabula rasa [blank slate].”

As the New York City Department of Planning points out in its residential retrofit programme, launched following Superstorm Sandy, which flooded New York homes and businesses four years ago, retrofitting small masonry-based buildings, situated close together as they often are in major Western cities, is difficult.

“The construction industry is reacting rather than changing or developing new strategies to deal with extreme climate and its role in exacerbating climate change,” says David Cole, director of Building Trust International, which is focused on construction in the developing world. “There has been a lot of talk about reducing embodied energy in material selection and about zero-carbon buildings [passive houses]. Here we have seen insulation technologies that are commonplace in extreme cold regions of Japan or the US become part of designs for housing in the UK, but they remain a rarity and are really only being taken on by eco-conscious self-builders.”

But growing awareness of the irreversible nature of climate change has also spawned some highly creative solutions that are neither expensive nor time consuming. They just require some mental adjustment.

In the German state of Saxony, architect and engineer Christian Mlynek has designed and built a round house that sits on a concrete foundation. The lower floor features a laundry room and a storage room that won’t sustain much damage if flooded, while the living quarters are upstairs, divided like cake slices. Thanks to the house’s round shape, both wind and water largely pass it by rather than hitting it with full force. The sloping roof protrudes a couple of feet beyond the building, allowing it to act as a parasol during the summer, thus keeping the house cool and eliminating the need for air conditioning. It took Mr Mlynek only three months to build the house.

As far as Rotterdam engineer Mr Peters is concerned, climate-resilient architecture and construction are not that hard – it’s just a matter of living with the elements rather than trying to shut them out.

Meanwhile, the lowly mushroom has resurfaced as a natural and, crucially, dependable, insulation material. Thanks to its fast growth, dense texture and ability to adjust to any shape, the mushroom can be used not just for packaging, but to build entire houses as well. Aided by mushrooms, in future we might grow our homes. 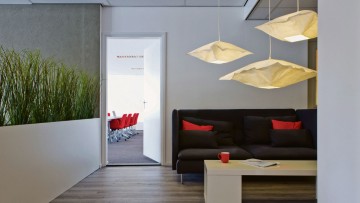 The ubiquitous partitions that divide open-plan offices are rarely environmentally friendly, consuming energy during the manufacturing process, and are often unloved by office staff. But what if there was a way to make offices more attractive and healthier, while at the same time addressing climate change and even making workers happier?

There is. It’s called the old-fashioned plant. Strictly speaking, it’s called biophilic design. Stephen R. Kellert, an emeritus professor at Yale University and a pioneer in the field, characterises biophilic design as “an innovative way of designing the places where we live, work and learn”.

He says: “We need nature in a deep and fundamental fashion, but we have often designed our cities and suburbs in ways that both degrade the environment and alienate us from nature.”

Translated to the office environment, that means replacing the synthetic-material partitions with leafy plants and bushes. According to research by Dr Uwe Röther, of the Erfurt University of Applied Sciences in Germany, the low-tech solution increases employee productivity by 39.6 per cent and can increase worker satisfaction by 40.7 per cent – and lowers the energy bill along with CO2 emissions.

Not surprisingly, a growing number of companies now offer biophilic design. Germany’s Art Aqua, for example, sells greenery-covered partition walls, hedges and green walls suitable for interior use, moss arrangements and indoor water falls. As the company points out, the plants not only clean the air, but also help regulate the temperature and keep the air moist. They absorb dust.

Another benefit of plants is there are species conditioned to every environment. With temperatures growing more extreme, office plants will become increasingly useful. And in a rapidly urbanising world, city dwellers will enjoy their rare interaction with nature.

The sticking point is, of course, the cost. Though Art Aqua doesn’t list its prices, its green walls can never beat the £100 or so that suppliers charge for a synthetic partition wall. Then again, the synthetic partition doesn’t make the people around it happy, doesn’t cleanse the air, doesn’t humidify the room and doesn’t contribute to climate change adaptation. As Google and the many companies that now employ biophilic design have discovered, going green indoors offers lasting benefits.