A joyous memory for Formula 1 fans. Lewis Hamilton’s first grand prix win, in Canada 2007. It was only his sixth race. He qualified in pole position. Blitzed the start, squeezing Fernando Alonso wide into the grass at the first corner. And then shimmered away. Even a safety car restart mid-race couldn’t hold him back. At 22, he was the youngest Formula 1 winner.

On the victory podium Hamilton could barely stay still. He did his best to stand to attention during God Save The Queen, but kept shaking his head in disbelief. A quick photograph with his trophy and then he explodes.

He leaps off the podium, whisking up the Jeroboam of Mumm champagne and blasts his team boss Martin Whitmarsh. He then pumps champagne into his own face, turns to soak second-place Nick Heidfeld, who returns the favour. Glugs hard from the bottle. And then walks up to the rail. Holds the Mumm aloft. Taps it a few times and then points at the massed ranks of the McLaren team and his father Anthony.

“This is for you” – a payback for all the support. The faith. The ten-year old boy who met Ron Dennis and told him – “I want to race for you one day… I want to race for McLaren” – had delivered. This was the victory he’d spent his life working for. 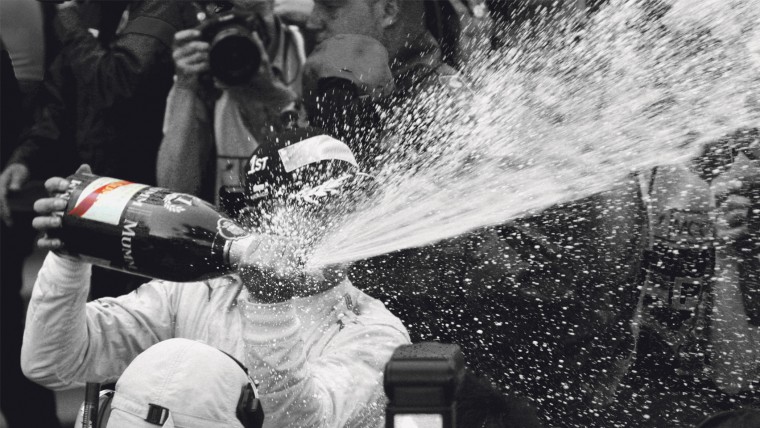 Fans love the podium scene. It was, of course, created and refined by the racers themselves. In 1950 in the heart of champagne country, Reims hosted its first French Grand Prix. The winner received a bottle. The tradition stuck.

At the 1966 Le Mans 24-hour race, Jo Siffert climbed on to the podium and received the winner’s bottle. The cork unexpectedly popped out, blowing a fine spray over spectators. They loved it. The following year at Le Mans, Dan Guerney gave Siffert’s gesture a deliberate re-run. The champagne moment has been an essential part of the victory ever since.

Since 2000, Formula 1 has exclusively relied on Mumm for the moment. This year more than two billion people will see the famous Mumm red sash on the podium. The connection between the sport and the champagne house is intuitive to people with an understanding of both.

Chief executive Philippe Guettat explains: “Mumm’s long-standing partnership with F1 was founded on shared values of performance, passion and a pioneering spirit, and continues to be driven by a mutual dedication to innovation and a quest for excellence.

“This partnership enables Mumm to widen its global reach and visibility, talking directly to consumers and Formula 1 fans worldwide.  As the official champagne sponsor, we are extremely proud to have witnessed the growth of F1 and Mumm in tandem, and to continue to play a central role in the iconic moment of victory on the podium around the world.”

The link is proving its value to both Formula 1 and to Mumm. “It helps us position Mumm as a global icon of victory in a stylish and glamorous way,” says Louis De Fautereau, Mumm’s brand director. “Formula 1 has been an amazing driver of awareness for the brand over 15 years.”

The proof? Sales are up 14 per cent in the last six months. Australia, where Formula 1 is a growing force, is booming. A tie-in with musician David Guetta has been a huge hit. Guetta’s Dangerous, depicting a grand prix with him as a driver, has been viewed online more than 100 million times. The video ends with a podium scene, with Guetta spraying lashings of Mumm. Naturally. How else do you celebrate victory?